The festive season failed to bring cheer to car makers, whose sales dropped on an annual basis in October, the second decline this financial year. Nine of the country's leading automobile manufacturers on Saturday reported a combined drop of four per cent in volumes to 206,574 units last month.

This was the first sales decline after April this year. According to data available with the Society of Indian Automobile Manufacturers (SIAM), the industry body, sales had fallen 9.5 per cent to 188,541 units in April.

Industry numbers were dragged down by Maruti Suzuki, which after growing 14.67 per cent in the first six months of 2014-15, posted a one per cent rise in car sales to 97,069 in October.

The company, however, pointed out that retail sales in October this year, at around 108,000 cars, were 10 per cent higher than the same month last year and also more than the wholesale sales recorded last month.

Announcing quarterly financial results on Thursday, Maruti Suzuki Chairman R C Bhargava had said: "The situation is not as bright as many had hoped for. Maruti Suzuki has had better growth (14.7 per cent) in the first half of the year, but the industry as a whole is not doing good. Without us, the industry's growth will be in the negative territory." 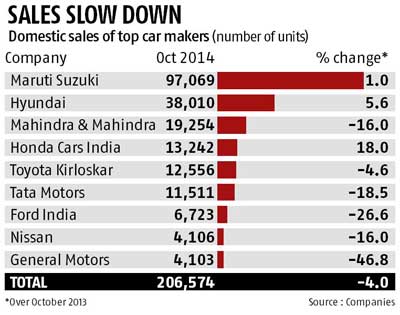 He had said growth was expected to slow down in the second half of the year due to a high base effect. "For the full financial year, we are expecting over 10 per cent sales growth, but in the second half the growth rate in terms of percentage will be slower than in the first half, as the base was higher in the second half last year," Bhargava pointed out.

At Hyundai, too, the growth rate moderated from 12.8 per cent in the first half of 2014-15. The South Korean automobile major sold 38,010 cars in October this year, a 5.6 per cent gain over the 36,002 cars sold in the year-ago period. However, Rakesh Srivastava, senior vice-president (sales & marketing), Hyundai Motors, was cautiously optimistic. "Hyundai's volumes grew nine per cent over the past month, with a significant increase in sales of additional and replacement buyers, propelled by strong demand for new models like the Elite i20 and Xcent. We anticipate this momentum will build up if there is a strong promise of improvement in economic factors," he said.

New launches helped boost numbers for Honda Cars India. The newly launched Mobilio (sales of 2,985), the Amaze (3,482) and the City (5,120) helped grow sales by 18 per cent in October. Sedans contributed nearly 65 per cent to the company's overall car sales in the domestic market last month. Jnaneswar Sen, senior vice-president (marketing & sales), Honda Cars India, said: "We have clocked excellent sales during the year so far where all our products have received tremendous response. Starting November, the Tapukara plant will start operations in the second shift, thereby ensuring better availability of the Honda City. This will also see full capacity utilisation of the Tapukara plant."

All other car makers, including Tata Motors, Toyota, General Motors, Mahindra & Mahindra and Ford, saw sales falling over October last year. At Toyota, sales went down 4.6 per cent to 12,556 vehicles. While Tata Motors said sales in its sedan segment were up 49 per cent, driven by the newly launched Zest, the company's overall sales of passenger vehicles dropped 19 per cent to 11,511 last month. Home-grown automobile major Mahindra & Mahindra (M&M), with no new vehicle launches, too, continued to see sluggish demand. M&M's sales were down 16 per cent to 19,254 units in October. Pravin Shah, chief executive, (automotive division and international operations), M&M, said: "Our sales for October remained subdued on the back of an overall sentiment and high interest rates… We do hope that the recently announced deregulation of diesel prices will support the automobile industry."

General Motors saw sales slide by a whopping 46.8 per cent to 4,103 units. "Even though the lower fuel prices are encouraging, the market is not showing any movement apart from new entries. Even the festival season did not bring the expected momentum in the market. The turnaround of the automobile sector is still not visible in the short term," said P Balendran, vice-president (corporate affairs), General Motors India.

Anurag Mehrotra, executive director (marketing, sales & service), Ford India, concurred: "Macroeconomic indicators suggest a gradual recovery in the economy. But the positive customer sentiment is yet to translate into vehicle sales, potentially due to high interest rates and inflation." Ford India registered a 26.6 per cent decline in domestic sales to 6,723 units in October.