Car market leader Maruti Suzuki India expects the volume recovery seen in the past few months to continue on the back of a strong growth momentum in rural India and a growing preference for personal transportation in urban markets.

The contribution of rural in Maruti’s sales mix advanced to 41 per cent in the five months of 2020-21, as against 37 per cent in the same period last year. In the entire FY20, rural sales contributed 39 per cent to the total sales. Even as growth has tapered off in urban India, brisk sales in rural markets are primarily a reflection of improving income levels, he said.

Maruti, like most automobile companies, defines rural on the basis of the government of India Census. According to the 2011 Census, there were 640,867 villages in India.

ALSO READ: VC investments from China down by 66% in 2020, startups to feel the heat

The firm’s sales in urban India in August saw a year-on-year growth rate of 11 per cent, while rural sales grew at a brisk 34.5 per cent. Both urban and rural sales declined in the year-to-date period by 42 per cent and 31 per cent, respectively.

In addition to an increased expenditure by the government, cash flows from a record harvest of rabi crops, good sowing of kharif crops, and a favourable monsoon in line with the forecasts have bumped up consumption in rural India. Earlier this month, rating agency ICRA revised its forecast for domestic tractor sales — a proxy for state of rural economy. It is 7-9 per cent as compared to 2-4 per cent earlier. 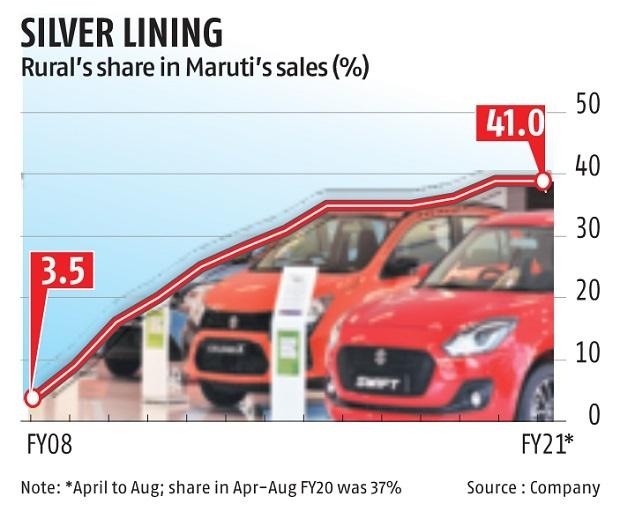 A sharp drop in stock levels at channel partners — 80,000 at the end of August from 130,000 in April — also gives Maruti enough headroom for dispatching more to its dealers and clock higher sales, said Srivastava. Auto firms count dispatches to dealers as sales.


Since the Covid-induced nationwide lockdown has been lifted, the firm has seen a recovery. In August, its sales grew 20 per cent to 116,704 units. The gains, however, largely came on a low base of last year, when it had sold 97,061 units. “One cannot read much into last month’s sales as it came on a very low base,” said Srivastava. YTD, the industry is still down 50 per cent y-0-y.


He, however, remains unfazed by the competition from Korean automakers Hyundai and Kia Motors in the SUV segment, where Brezza currently enjoys a leadership position. A 1.5-litre petrol engine, which powers the Brezza, will hold the company in good stead and help the company ward off competition from the upcoming Sonnet compact SUV and other rivals.


“It’s a white space that will continue to tap into,” he said, pointing out that the share of petrol in the compact SUVs now stands at 75 per cent.


An analyst at a domestic brokerage said, “Once the market recovers, companies will go full throttle with their launches, and Maruti will have more competition."