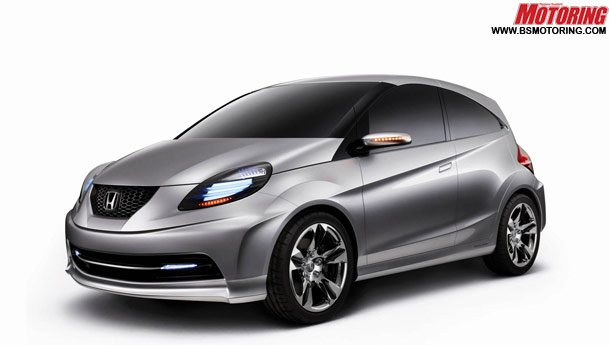 Honda’s global launch of its small car concept, called the ‘New Small’, at the first day of the Auto Expo here, heralds not only a change on the company’s view of the Indian market, but also its design ethos.

Speaking to Business Standard, Motoaki Minowa, senior chief engineer, styling and design development, and the man responsible for the overall design, said the biggest challenge was to make the car look big and appealing. “We were inspired by the CR-Z concept (also on display at the show) and its design cues were compressed into a smaller package”, he explained.

The company is making its second venture into small cars after last year’s launch of the Jazz. It is aiming to make the car available in 2011, with India and Thailand being the first markets to receive it.

With India to receive more than half a dozen models in the B-segment in the next 12-15 months, exterior design will be one of the key differentiators in a rather over-crowded market. “The design is dynamic, yet efficient,” remarked Minowa, “and design elements from this car can be seen on future Hondas as well.”

The missing rear door handles have been neatly incorporated into a sharply raked C-pillar and, like the Chevrolet Beat, are designed to give it a unique appeal. “While the character line is prominent across the length of the car, it has also resulted in better space and aerodynamic efficiency,” he said.

Honda will roll out this baiter of the Maruti Suzuki Swift and Hyundai i10 Kappa from its plant at Noida, as it ramps up its facilities in Alwar, Rajasthan, to produce body panels for the City and the Jazz. Honda haven’t confirmed a price tag, nor an engine for the car, but expect it to be powered by a 1.0-1.2-litre petrol VTEC engine and have sub 4-metre length to help it get excise duty benefits.