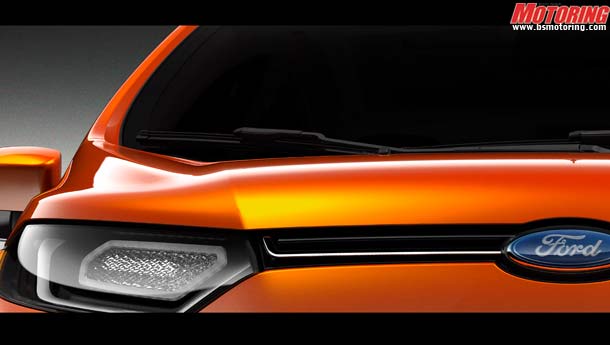 Ford has released teasers of their upcoming all-new global vehicle, due to be unveiled at the Delhi Auto Expo 2012. We’re expecting the new Ford EcoSport to be unveiled at the Expo and from the looks of it, it’s going to be one sharp looking SUV. Now, it’s not a full-size SUV but more of a compact SUV based on the Fiesta platform.

It’s one of Ford’s best-selling vehicles in the South American markets, namely Brazil and Mexico. The new EcoSport will be a new global Ford vehicle that will be unveiled at the Delhi Auto Expo – another indicator of the growing importance of the Indian market.

COMPLETE DETAILS ON THE NEW FORD ECOSPORT UNVEILING AT THE 2012 AUTO EXPO: https://bsmotoring.com/autoexpo11/storypage.php?autono=4397