Day 1 of lockdown 3.0: India limps back, but industry still in limbo

Cities and towns across the country bustled with activity on Monday as 40-day Covid-induced lockdown restrictions were relaxed to allow movement of people and opening of shops, offices and businesses.


With public transport still not allowed in 130 red-zone districts, which comprise some of the economically important urban centres, people took out their private vehicles. Some parts of Delhi, Gurugram, and Bengaluru even witnessed morning-hour traffic jams.


Migrants queued up outside clinics in Mumbai and its suburbs to procure medical certificates they need to travel to their native places, and there were serpentine queues at liquor stores. Some shops selling non-essential products traded for the first time in months.


However, the eased restrictions failed to bring succour to industry. In Gurugram, Balloons 76, an upscale party shopping store in DLF IV, got two customers. The shop, like most others nowadays, had markings to meet social distancing norms. Lalit and Tapan, who stay in the same city, are manning the shop, which normally has half a dozen workers. “Others stay in Delhi and Faridabad and find it difficult to come. But then, we are also not allowed to have all the staff,” said Lalit. The metro link to Delhi that connects to Faridabad is shut and no other public transport is running. 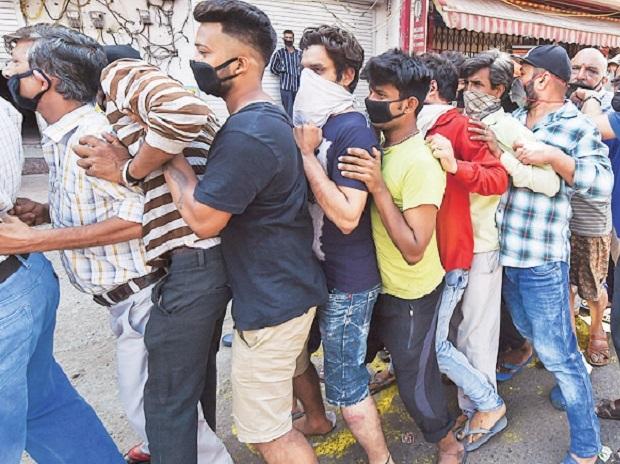 People outside a liquor shop at Chander Nagar in East Delhi on Monday. The Delhi government is set to charge 70% more tax on liquor from Tuesday.

Right outside the Taj hotel, Gulab, a 33-year-old labourer, rued the fact that a contractor cheated him with hopes of more pay, which made him take one of the last passengers trains out from the city of Daltonganj in Jharkhand to reach Delhi.


He also took one of last metros to run on March 21 — before being shut on the day of Janata Curfew the next day — along with two others to work at the local authority’s under-construction site.


On being apprised that the contractor had no role in the stopping of construction, he mellowed down and said, “The contractor does pay for our expenses.” Construction for the underpass began in mid-April and is the only business activity visible in the area.


The IndiGo office next to the Taj is shut and so are the other offices in Sector 44 industrial area.  At the upscale Galleria Market in DLF IV, the famous Bahri Sons bookstore was open. "A few customers visited but we are mainly getting items delivered," said an employee.

ALSO READ: Minting money: States earned Rs 1.75 trillion from sale of alcohol in FY20
The Cyber City area that houses some of the top corporate houses like Reliance Jio, Shell, GE, Vedanta, PwC, S&P, and EY wore a deserted look. "We would rather err on the side of safety than risk the lives of our people. There is still uncertainty, so mostly people are working from home," said an executive of one of the multinationals housed there.


A GE spokesperson said: "We are in touch with our stakeholders to maintain business continuity to the best of our ability. Our factories and offices in India are either operating or planning to start in compliance with the various guidelines.”


In Bengaluru’s IT offices, attendance was low. Employees of companies such as Mindtree and Accenture, with campuses inside Global Tech Park, continued to work from home. The story was no different at Electronics City, where Infosys is headquartered. “We didn't see any material change in employee attendance on Monday. Turnout will increase in phases.

Towards next week, it may rise after we sort out logistics issues," a spokesperson of Infosys said. Most firms have said they would start gradual resumption of work from offices only after May 18.


In Tamil Nadu, some districts are against giving a go-ahead for firms to start manufacturing. The industrial estates in Chennai, according to sources, are not allowed to work. Auto and auto components makers in and around Chennai continue to remain shut. Hyundai said they would start production on May 6, but others have not disclosed their plans. In Gurugram, Hero MotoCorp, India’s largest two-wheeler manufacturer, resumed operations.

In Kolkata, too, employees of big firms continued to work from home. Sources said ITC had asked staff to work from home as have Eveready, Goodricke, and others. MSMEs said they were keen to restart, but were waiting for more clarity from the state.

On the export front, industrial units in Karnataka, Madhya Pradesh, Uttar Pradesh continued to raise issues of differences in standard operating procedures prescribed by the home ministry and the health departments of respective states, said a senior functionary of the Federation of Indian Export Organisations. It said local authorities in industrial states like Tamil Nadu and Maharashtra were still not permitting units to reopen, even in the green zones.


Despite demand for pharma products rising, the Pharmaceutical Export Promotion Council (Pharmexcil) estimates to have lost about $1.5 billion in exports in March due to restrictions. Now, manufacturers would try push beyond to fulfill remaining export orders, said Pharmexcil Director-General Udaya Bhaskar.

Lack of smooth supply chains continued to hit sectors, especially the engineering goods industry. Export industries told the Department for Promotion of Industry and Internal Trade over the weekend about the lack of availability of labour. “Industries have now been finally able to put in place a protocol of action with proper norms for sanitation, and social distancing. That has helped many start production from Monday. But the supply chain needs to normalise," said Chandrajit Banerjee, director-general of the Confederation of Indian Industry.


Several district administrations across states did not allow opening up of shops. Neither was there uniformity in easing of restrictions. Telangana Cabinet will meet on May 5 to discuss easing norms. Telangana had extended a strict lockdown until May 7. Jharkhand said it would not implement any of the relaxations allowed by the Centre from Monday, and decided to extend the ‘total’ lockdown in the state for two more weeks.