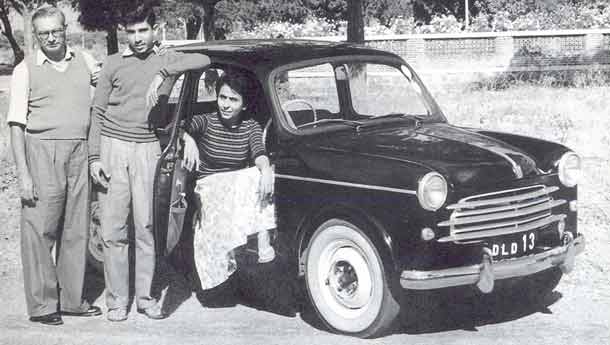 Imagine chronicling the most turbulent times of our nation. Imagine being an eyewitness to India’s Independence, the Partition and the political years of the colossus called Jawaharlal Nehru. Imagine being there when history was being created by the titans who created a new nation from an ancient civilisation. Imagine being there at the Mahatma’s funeral procession or the Dalai Lama entering India from China-occupied Tibet. Imagine telling the world about a newborn nation and its heady, idealistic years. Imagine being the only lady around in a profession dominated by men. Imagine not being able to use her own byline in publications that hired her – she had to use her husband’s name instead. Imagine being called Dalda 13.

She was in the news recently – she passed away on January 15 at the age of 98. Her name was Homai Vyarawalla and she was a photojournalist who worked for various media houses and press information services. She was a diminutive lady who, armed with a huge camera, went about taking pictures that are priceless today. In keeping with her Gandhian philosophy, the body of work she created has been bequeathed to the Alkazi Foundation of the Arts in Delhi so that the whole of India benefits from it.

In the 1970s, after the death of her husband, she gave up photography for good and settled down in Vadodara to lead a life of quiet existence, and a solitary one too, after the death of her son in the 1980s. She was forgotten all this while till the last decade when the rest of India heard about this indomitable lady and she was back in the news. Last year, she was awarded the nation’s second highest civilian honour, the Padma Vibhushan.

So why Dalda 13? On <I>Dhanteras<I> day in November 1955, Homai took delivery of a Fiat 1100-103 Nuova Millicento in Mumbai and had it shipped to Delhi by rail for an additional cost of Rs 200. The car was registered in Delhi as DLD 13. Thirteen was lucky for Homai, she was born in the year 1913 and she met her husband-to-be when she was 13. The lady driving DLD 13 thus got nicknamed Dalda 13 and she actually used it as a byline for her stories and text! The lady and the car were identified with each other!

The Millicento was an integral part of the Vyarawallas' lives, travelling all around the country in it. Reportedly, it was also the car in which her husband’s ashes were taken. When she shifted to Vadodara, her faithful Fiat followed her, but it had to be re-registered. Out went the DLD plate and in came a GJ number-plate. 'It was never the same,' she was reported to have said. Despite her age, Homai used to drive the car around the streets of Vadodara regularly. Well, she did not just do her driving herself; she did all her own chores and errands too – a true Gandhian.

Sometime in 2009, when it was getting tough to maintain, she gave the Millicento away to her nephew and got herself from one of the initial batches, the Tata Nano. (a 'ghastly' red – in her own words) which of course she drove around. Remember, she was over 90 years old then. Being Homai, she didn’t ask for a priority allotment either. She gave away the Nano recently before her death – the reason was that it was too tall for her to clean it. Yes, she cleaned her car herself!

So where’s the Fiat now? It is now with the very young Karl Bhote, a long-time <I>BSM<I> reader, owner of several classic bikes and cars, a fount of information on Indian vintage and classic machines and who works in the marketing department of an automotive firm now. Karl, who took the effort to locate the car and pick it up from Homai’s nephew in 2009, says that it needs a lot of effort to bring it back into shape. The restoration started then and it is still going on, he says. 'Imagine this is Homai Vyarawalla’s Fiat!' says Karl. Yes, imagine...