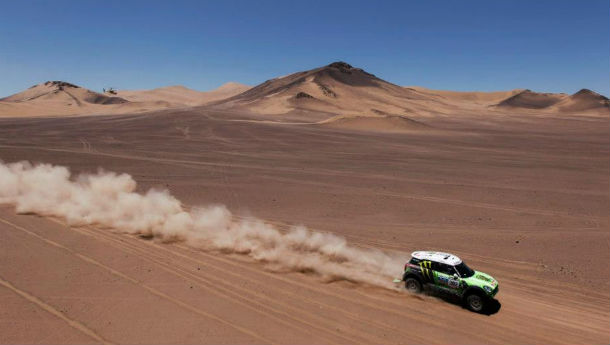 Yes, we're a little late in bringing you an update of the 2013 Dakar Rally, but here it is at last. Stephane Peterhansel has gone and won the Dakar Rally again, taking his total number of wins at the gruelling event to 11. Peterhansel is now the only man in the history of the Dakar to win the event five times in a car, shattering Ari Vatanen's record run of four wins. The Frenchman has won the remaining six times on a motorcycle.

The final stage on Saturday wasn't the most nervewracking for Peterhansel, though, who had established a good lead over nearest rival. Peterhansel was particularly grateful to his X-Raid Mini team and thanked them not only for running a good event over the course of the two weeks, but also over the year as well. It was the first time that the Frenchman had completed the rally with absolutely no mechanical problems whatsoever. Meanwhile, mechanical problems did hit the Red Bull buggies piloted by Nasser Al-Atiyah and Carlos Sainz. It was South African Giniel de Villiers who finished the rally second in a Toyota. Leonid Novitskiy of Russia took third place.