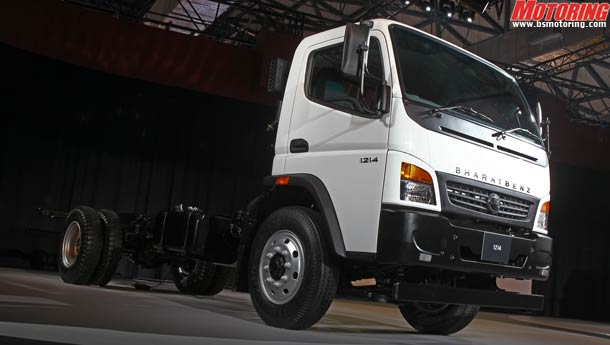 Widening its portfolio in the domestic market, German truck manufacturer Daimler will soon roll out light-duty trucks from its facility at nearby Oragadam.

Daimler India, a 100% subsidiary of Daimler AG, had recently launched three heavy duty trucks -- 2523R and 3123R for the haulage segment and 2523C for the construction segment under 'Bharat Benz' from the plant.

Daimler India has commenced production of its light duty trucks in Nine and 12 tonne rigid and 12 tonne construction segments, the company said.

"BharatBenz will soon be ready with its offerings in the light duty segment that are based on the Fuso Canter platform," Daimler India said in a statement.

The Light duty truck range are based on FUSO Canter, brand of Daimler based out of Japan.

"We are well on track with our growth strategies and will have a good product mix for the customers. With fuel prices soaring, customers will want trucks that are more fuel efficient, reliable and robust," Daimler India Commercial Vehicle Managing Director and CEO Marc Llistosella said.

"In the coming months we would strategically release the products in the market that will include LDT and HDT range," he said.

BharatBenz range of Light-Duty trucks has been tested under Indian conditions the statement said, adding the light duty trucks offer a minimum of 10% more fuel efficiency compared to existing products.

Daimler India in April this year, inaugurated its 400 acre facility at Oragadam at an investment of Rs 4,400 crore, employing about 1,400 people.

The statement said the company would have 17 dealerships covering 42 locations across the country in the first phase. By 2013, it would be increased to 108 locations, it added.