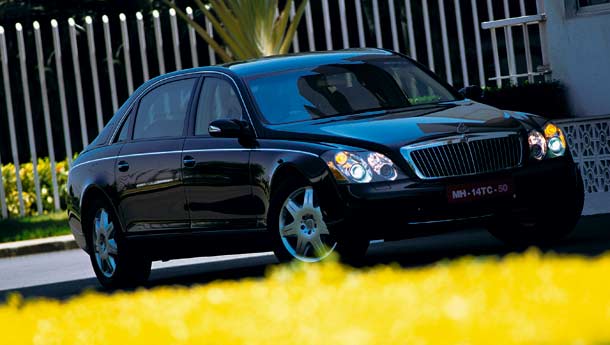 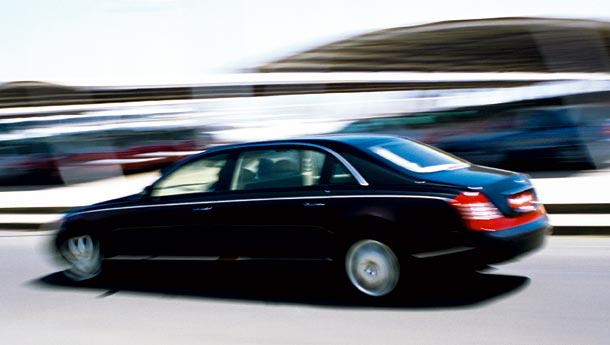 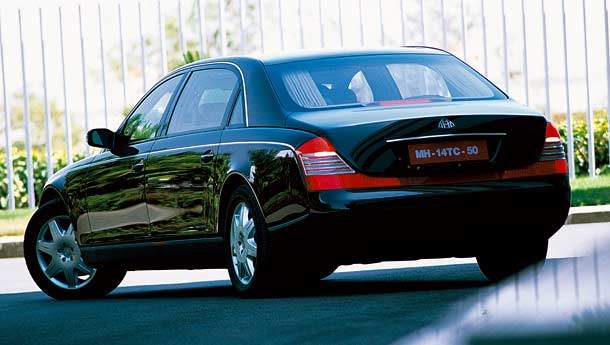 At Motoring, there is always an air of expectation that builds up every time a new car has to be driven or tested – whether it be the new Maini Reva or a priceless Jaguar XK150. It is not unusual for some of us to endure agonising nights before the photo session and drive. My routine involves psyching out everyone around me, at home, office, and if possible, the neighbourhood. On such mornings, I wake up pretty early, make my own coffee and leave before the sun is up. But the excitement was missing the night before the Maybach drive. Allow me to explain.

The only thing that was luring me to make the trip to the Pimpri factory of DaimlerChrysler was our mode of transport. We had a prospective Maybach customer – the son of a Maharaja to be precise – coming with us to Pune, and he had brought along a very powerful American sports car for the trip. Now that was reason enough to get excited and not the Maybach. Seriously, after all that hype and price shock, I was in no mood to drive the Maybach and I was pretty confident that the only real outcome of the drive would be to casually boast to various people that I have driven the Rs 5.5 crore car. More than that, I already knew how the drive would be – flawless. And I also knew the car needed to be ‘experienced’ from the back seat, making the ‘test-drive’ rather academic.

Seriously, there are times when a car maker decides the opinions of motoring journalists do not really count. Especially so, when they are re-inventing luxury automobiles and are busy reincarnating dead brands. Two years ago, I was at the Geneva Motor Show, trying to get the first peek of the Maybach 62, an ultra-luxury sedan that DaimlerChrysler decided to build for the stupendously rich and dangerously powerful people in this world. The car, sorry, automobile, was on display all right, but some smart-alec had decided to put it in a glass house, to give it that elusive-hence-exclusive aura. Not satisfied with just that, they gave an extremely dark tint to the glass walls, so that those who really wanted to see the car had to press their noses and cheeks to the glass and peep. Occasionally, they would let in a shimmer of light to allow poor scribes, ranging from Road & Track editors to the Pick-Up Magazine reporter from Lithuania, struggle hard to see its silhouette. It looked like a large car and I could just about make out the twin-tone colour scheme of it.   Around me, journalists were pleading to rather proud DaimlerChrysler employees to part with their Double-M coat-pin that signified the rebirth of the Maybach brand. And another group fought for the press kit in English, something that would fetch them a great deal, say ten years down the line. I fought off the stout challenge from a stubborn French journalist and managed to get a French edition. The kit was just short of a gilt-edged affair and had real pictures of the Maybach – making the above-mentioned dark-glass aquarium stunt quite a pointless exercise. In a way, DC was telling the world, ‘whatever you have to say, dear scribe, we really don’t care. This is the mightiest, most expensive automobile of them all and you will never be able to influence its prospective buyers with your comments – because they are too busy to read you.’ And there, I buried my hope of driving one in this lifetime and walked away to ogle at Alfa Romeos with beautiful women all over them at Giugiaro’s pavilion. At least the subjects were better lit.

Later I came to know that DaimlerChrysler India was homologating the Maybach for India and was seriously surprised to see a right-hand drive version on display at the Auto Expo in Delhi. A shocker price tag of Rs 5.5 crore meant the otherwise lukewarm Expo had a real star and people thronged to get a glimpse of the Maybach. Trust me, I really didn’t know how many zeroes were there in 5.5 crore and even then didn’t harbour any hopes of getting behind the wheel of one.

After showing off the only Maybach in the subcontinent at various golf tournaments (wrong people, DC, catch those who have 19 holes in their backyard instead), the firm called motoring journalists – yes! – to have a go.

That is why we were at Pimpri on this scorcher of a day when the merciless sun was in a mood to bake us inside out. The 430 bhp supercharged Chevrolet Camaro that we drove to Pune was amazing – and that topless red missile made sure that the journey was pretty short and incredible fun. Once at the DCI plant, we made the customary phone calls and waited at the reception.

It made me jump the same way a train would do when you are standing on the platform. The Maybach 62 pulled up outside the glass doors of the reception. I was seeing it outside a motor show atmosphere for the first time. It was really long. Never-ending, like a locomotive. May I repeat how long it was? Very. Suddenly, for the first time, I realised that I was going to drive it. But Param, our photographer, took an hour, a timeframe that felt like a leap year, to finish with the stills. He couldn’t be blamed, since there was a lot to photograph too. Starting from the illuminated double-M logo set inside the bi-xenon headlamps to the electro-transparent panoramic roof, there was plenty to shoot in this car.

Some, in a derogatory way, suggest the Maybach is a specced-up Mercedes-Benz S-Class. It is a very wrong thing to say, although a great deal of automotive innovations that you will find in the S-Class can also be found in the Maybach in a much more accomplished and developed format. Having the S-Class as a starting point has certainly helped, but then that is a very positive thing, right? So the Maybach gets Sensotronic Brake Control, Airmatic dual control air suspension that makes the ride really magic-carpet like, Linguatronic voice-controlled operations and so on. All perfected in the S-Class, and further evolved for use in the best automobile in the world.   Ditto the engine. Mercedes makes one of the best 12 cylinder engines on Earth and this 5513cc motor is massaged by two turbochargers and twin-spark ignition to produce a whopping 543 bhp for the Maybach application. Why so much power, you may ask? One Mr Pervez Musharaff will be in a better position to answer – he had two narrow escapes when his S-Class motorcade was ambushed and he will tell you that it is important to have an abundance of power even when you are in a limousine. The gross vehicle weight of the Maybach 62 is 3.3 tonnes and that above-mentioned mother of a V12 makes sure that all that mass accelerates to 100 kph in under 5.5 seconds flat! Only the best of Ferraris and Porsches will better that – and mind you, we are comparing a blue whale to butterflies here.

As expected, all the activity centres around the 2.68 metre-long living room, which can be customised using about two million equipment options. The DVD, TV, phone and refrigerator are taken for granted, but the Maybach line of optional accessories range to made-to-measure luggage, sterling silver champagne flutes, humidor, a golf bag and live human attendants. Alright, the last one, I made up. There is so much leather and wood on the inside that not just cows, but any self-respecting tree would run for cover at the sight of a Maybach. The reclining seat is a marvel and straight out of the best business jet you can imagine. It reclines to 47 degrees and makes you feel sleepy the moment you try it out. From there, you can operate almost everything in the car – the doors can be closed, the driver’s compartment can be separated, an electronic massage can be activated and you can even keep an eye on the speed of the car, thanks to a second set of dials meant just for the passengers. All this in the ambient lighting provided by strategically positioned and well-crafted light fixtures or by watching the blue sky through the panoramic roof. Snore.

Photography over, we got our chance to become the select few in the world who have driven a Maybach. I watched my colleague Srini slip behind the wheel with a grin plastered across his face – he was about to become the first Indian (other than the three DCI drivers who are allowed to drive) to pilot the car that has caught the attention of the whole world. Please note, it was not a prince, not a beer tycoon, not a stud farm owner and not even the President of the country, it was my dear friend Srini, who normally hunts down classic and vintage cars for a living, who got that privilege – and I was really not amused when he refused to get out of the car.

We were not allowed to drive the car outside the factory premises, which meant just about a 400-metre stretch where we could – oh, the dreaded word again – ‘experience’ it. So when Srini was finally hauled out of the car, I adjusted the seat and mirrors as I would with any new test car, slotted the automatic gear lever to D (for drive) and let the brake go. The Maybach 62 rolled forward in a truly majestic fashion – no lurches, no wheelspin, no hooligan behaviour and I could faintly feel, not hear, the massive 12 cylinder purring away somewhere in front of me. The driving position was good for my 5.9 figure but Michael Jordan, I am positive, would never buy it as a self-driven car. Despite the length, the car turned by instinct, almost as if those bi-xenons doubled as mechanical eyes. We had to watch out for DC employees ambling along to find lunch at the canteen and then we had a clear stretch where I could put that Maybach pedal to plush carpet.

And I did just that. I forgot the fact that the damn thing cost Rs 4 lakh to insure for a month and let those turbochargers work hard, in all probability, for the first time in their life. Still there was no lurch, no dive and nothing physical, except a whitewashed wall that was closing on us and looking more like a movie screen. I didn’t time it, and that would have been very silly in any case, but I am sure the Maybach claim of 100 kph in 5.5 seconds is a big lie. The Maybach I was driving would have done it in just about 5 seconds flat! Incredible. Soon, my two laps of fame was over. It was indeed the most luxurious car that I have ever driven and I think the Rolls-Royce Phantom needs to come with a Ms Universe contender as an optional extra to beat this experience. It is a politically incorrect mode of transport in most ways, but then, so are Boeing 747s.

I have driven the Maybach and I am not recommending it to anyone only because, I still think, its manufacturer does not really expect my clan to do that. I don’t even feel like advising the buyer to buy seven S-Class sedans in different colours for the price of a solitary Maybach. In the rarefied world of sheer wealth, all such trivial comparisons do not even make subject matter for bad jokes. It is hard, but true, some cars don’t need motoring journalists to attest them.