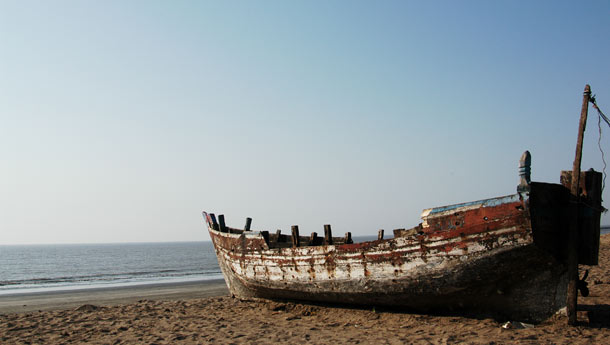 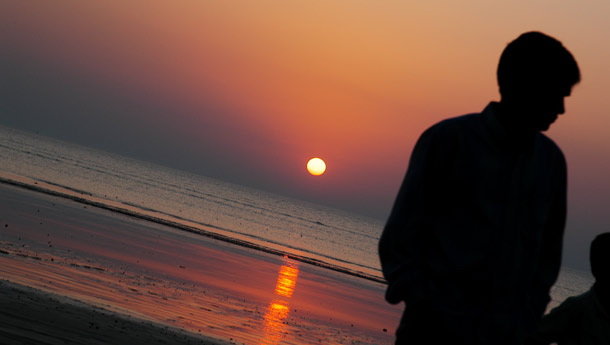 ‘Oye dikra, bring a stick quickly, we’ll finish the bh******d!’. I’m not sure what sort of alarm clock you’re used to, but I’d be willing to bet it isn’t one that bellows this at seven in the morning. Mind you, it’s remarkably effective as a wake-up call, because I leapt out of bed in one of those confused tizzies saying ‘What? Where?’ and stumbled to the balcony to see what the fuss was about. ‘Uncle’, the patriarch of the family I was staying with, was making his way in a determined fashion towards a tall tree in the back garden, rifle in hand. I couldn’t yet figure out who (or what) the bh******d in question was, but I realised that they/it were about to have a very bad day.

The concerned dikra had by now materialised with a big stick, followed by an assortment of dogs barking their collective heads off. They all gathered at the foot of the tree, looking upwards and getting very excited, and were soon joined by a few cackling geese. Uncle steadied himself, took careful aim and cracked one off in the general direction of the heavens. I still wasn’t sure what he was aiming at, unless his daily routine included gunning down trees first thing in the morning. He loosed off another round and I heard lots of rustling noises as an indistinguishable shape fell through the branches and onto the ground. The geese fled, the dogs pumped up the volume and dikra set upon whatever it was with alarming gusto, ensuring that if Uncle had missed, he certainly wouldn’t. Uncle, meanwhile, was yelling robust words of encouragement and after about two minutes, it was all over. Just to make sure (I haven’t a clue why; not even Dara Singh could have survived that massacre), a fire was lit and the mysterious corpse was cast into the flames. ‘Ah, you’re up early, son. Good habit, good habit,’ Uncle said, spotting me and giving me totally undue credit. ‘Shot a snake, you know. Dangerous things, bh******d snakes.’ I didn’t disagree with his judgement, incestuous or not, having just seen what he was capable of with a firearm.

I looked upon this literally explosive start to my Dahanu stay as a good omen of sorts. Surely anything that I experienced over the next few days would only be an added highlight. Mind you, I hadn’t expected anything resembling gunfire and early-morning hunting trips. Dahanu, on Maharashtra’s Konkan coast, had seemed like the sort of place where the local paper would have headlines like ‘Man has sneezing fit’. In fact, when Joshua had suggested we go there, I had raised a semi-incredulous eyebrow. ‘Dahanu? Firstly, where is it? More importantly, what does one do there?’ ‘Oh don’t worry, it’s only about three hours from Mumbai and it’s on the coast. Hardly anybody goes there, it’s very peaceful and we can stay with friends of my mother’s. That aunty’s a damn good cook also.’ His last line sold me, so before long we were pointing the business end of a Bolero down the Mumbai-Ahmedabad highway, Joshua stuffing his face with chips and me coming to terms with an overly-sprung suspension. The road all the way there was great, however, so it was after an entertaining drive that we pulled into the driveway of Mavais and Soli Irani’s lovely old bungalow.

It was clearly the residence of someone in the farming business - a tractor was parked by the porch, bags of manure and farm implements were piled in an open shed and a well-worn Bajaj M80 was leaned against a wall. It was an altogether agreeable place and gave off a relaxed, earthy vibe that made me feel instantly at home. We walked up the porch steps and almost leapt onto the roof in a single bound when what seemed like the Hound of the Baskervilles came snarling out from behind a chair and lunged at us, being held back at the last second by a fortuitously short chain. As we cowered, backs and hands pressed flat against the wall, Soli came out and greeted us. ‘Welcome, welcome, I hope you boys had a good journey.’ He either genuinely didn’t notice that we were shortly to be in need of fresh underwear, or this sort of thing was a common occurrence. ‘Oh don’t mind him, he’s a docile fellow with us but a bit snappy with others. He bit our doctor friend the other day, poor fellow.’ I wasn’t sure whether he was referring to the dog or the recently punctured doctor, but I let it pass.   Over an absolutely delicious lunch (Told you-Joshua) of prawn and mutton curry, I chatted with Soli about Dahanu and its relatively short but interesting history. ‘See, Dahanu’s a very small place, still like a little village. We have our modern amenities and all that, and we even have our own website, but at heart Dahanu is still a farming centre.’ The farming that he was talking about was, of course, chikoo. If there’s one thing that Dahanu and it’s immediate environs are famous for, it’s chikoos (and pudina too; no self-respecting Parsi makes their pudina chai with anything other than Dahanu pudina). Soli was himself a chikoo farmer, like his father before him, which explained his rugged, creased countenance, his sunburnt face and calloused hands.

‘After the Parsis first landed at Nargol beach north of here, they spread out and settled in places like Dahanu, Udvada and Bordi and most of us have been here ever since.’ His sprightly wife Mavais, who had been fussing around us and telling us growing boys should be eating more, said ‘Now of course there’s hardly anyone left. None of the youngsters want to continue farming, and who can blame them? They live in a different age and want different things.’ ‘What about the power plant? How has that affected life here?’ I knew that an action group had been formed in Dahanu against the nearby powerplant, because of environmental concerns. Her voice took on a steely edge. ‘That plant has really hurt the farming community here. It spews out so many poisons into the air that it’s difficult to grow anything any more. We used to send truckloads of chikoos to Bombay before it came up, but now it’s down to just a few.’ ‘She’s at the forefront of the campaign to force the plant to clean up its act,’ said Soli with barely disguised pride. I know that journalistic ethics dictate that one should be dispassionate about these things, but they simply didn’t apply here. These were good, solid, open-hearted people who had lived here all their lives, and they deserved a break. I told them I hoped they would succeed in shutting the plant down, and I really meant it.

I politely declined the suggestion of an afternoon siesta and decided to have a look around town (such as there was). Clearly, Dahanu had once been an idyllic little place, full of laid-back character and sprawling Parsi-style bungalows. Now, although there were still a few left, the sort of concrete ugliness much favoured by humankind was much more in evidence. Still, the closer I got to the beach the more old-world the place got, none more so than Dahanu fort. A remnant of the place’s Portuguese history, it was one of the smallest forts I had ever seen and was now in service as the local jail. How they kept anyone in (or out) was obviously a closely-guarded secret, because Joshua and I calmly strolled in and clambered up the battlement walls. There wasn’t much to the place apart from semi-dozing policemen (to be fair to them, Dahanu has that sort of relaxing effect on you), so we ventured further afield towards the beach - which turned out to be spectacular. It seemed endless, mile upon mile of soft sand and placid water stretching further than I could see (it’s 16 km long, for the trivia-minded) and it was virtually deserted. Across the road was an array of magnificent old houses (most falling to pieces, but still magnificent), and not for the first time I found myself wishing I had the money to buy and restore a place like that. I mean, what a location!

We tore ourselves away and drove along the coast, passing windmill farms and never-ending rows of suru trees, until we ended up in Bordi, a little hamlet that was even more sleepy than Dahanu. For such a small place, it had a surprisingly large number of mainly Parsi-funded schools along the beach (again, what a location!) and we seemed to have arrived after school had given out, because the whole place was awash with schoolkids playing on the beach. We took a stroll on to the beach, taking in lungfuls of the coastal finest and getting sand in our shoes. We found an abandoned fishing boat, complete with engine, and settled down beside it. Or at least I did, while Joshua attempted to dismantle and reassemble the engine with his bare hands (‘and no Josh, you can’t put that engine on your RD either’). Sure, there wasn’t much to ‘do’ in these parts, but with this sort of unspoilt beauty on offer, I certainly wasn’t complaining. Besides, there was dinner to look forward to at casa Irani...