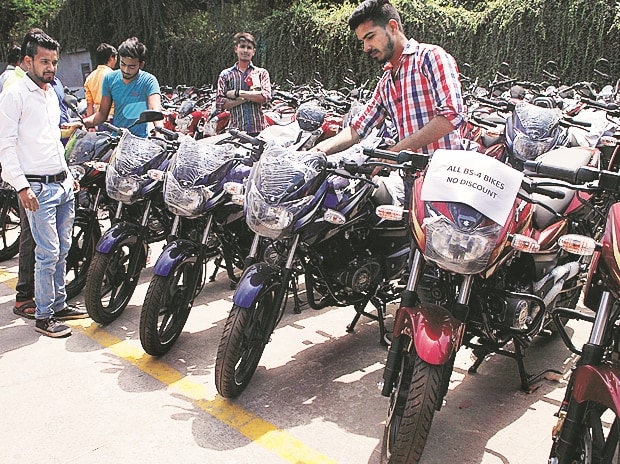 The Supreme Court's order restricting OEMs from selling BS-III vehicles has taken a toll on commercial vehicle sales in the country during the month of April, as all OEMs have reported a significant drop.


Tata Motors' domestic commercial vehicles sales in April 2017 stood at 16,017 units, lower by 36 per cent over April 2016. "This is an unusual decline, under exceptional circumstances," said the company.


Commercial vehicles were affected by the Supreme Court judgment announced on March 29, with the ban on BS-III vehicles, leading to the need for a higher quantity of BS-IV stock for April sales.


"The higher demand at short notice was not matched by production, especially in the MHCV segments. Moreover, after the strong pre-buying of BS-III vehicles in March, and the price increase of BS-IV vehicles (especially in MHCVs and buses, at 8-10 per cent), demand for BS-IV vehicles was also weak," said the company.


Ashok Leyland Ltd has reported a 30 per cent fall in its overall sales in April, the steepest in seven months.


The Hinduja Group's flagship company and country's second-largest commercial vehicle manufacturer sold 7,083 units in April 2017 as against 10,182 units, a year ago. Analysts had estimated Ashok Leyland would sell 7,500 -7,700 units in March.


Sales of medium and heavy commercial vehicles declined 43 per cent to 4,525 units compared with 7,873 units a year ago. Light commercial vehicle sales were up about 11 per cent in April to 2,558 units, from 2,309 units in the year-ago period.


The company's management said that it has an inventory of around 10,000 units and will retrofit its older BS-III vehicles with new technology to meet the Supreme Court directive.


VE Commercial Vehicles on Tuesday reported a 42.4 per cent decline in total sales at 3,089 units for April. The company, a joint venture between Sweden's Volvo Group and Eicher Motors, had sold 5,365 units in the same period last year.


Mahindra & Mahindra (M&M) sold 278 medium and heavy commercial vehicles units as against 472 units, a drop of 41 per cent.


Crisil Research estimates the impact of this on the standalone ebidta margins of listed truck makers such as Ashok Leyland and Tata Motors, equivalent to 2.5 per cent of their revenues. The impact would be staggered across fiscals 2017 and 2018 because the unsold inventory will have to be brought back from dealerships and then be dealt with.


It may be recalled that automakers, mainly in the two-wheeler and CV segments, offered huge discounts to clear stocks.


Earlier SIAM's President and Ashok Leyland MD Vinod K Dasari had estimated that impact for the industry would be in the range of around Rs 20,000 crore. While 90-95 per cent of two-wheelers stocks were sold before March 31, CV makers could sell only 10-15 per cent.


Rajan Wadhera, president, automotive sector, M&M said the company is hopeful that the new fiscal will bring in positive sentiments for the automotive industry, with key demand drivers in places.


The ongoing infrastructure development initiatives, the outlook for a normal monsoon and the expectation of a stable policy environment will fuel growth in the coming days, he added.