Domestic commercial vehicle (CV) sales dropped by over 17 per cent in November 2019, going by individual company-announced despatches, to 57,510 units from 69,666 units a year ago.

While the numbers are better for major players month-on-month, demand continues to remain under pressure led by the slow pace of industrial activity, extended rain delaying infrastructure projects, and higher operating costs, among other factors.

However companies expect a recovery in the second half of the financial year.

Domestic CV sales at the country’s largest commercial vehicle maker, Tata Motors, dropped nearly 17 per cent to 27,657 units in November 2019 from 33,488 units a year ago.

The country’s second largest CV maker Ashok Leyland’s domestic M&HCV and Light Commercial Vehicle (LCV) sales declined by 25 per cent to 9,377 units during November, from 12,570 units a year ago. Its M&HCV sales alone were down 36 per cent to 5,321 units from 8,260 units. 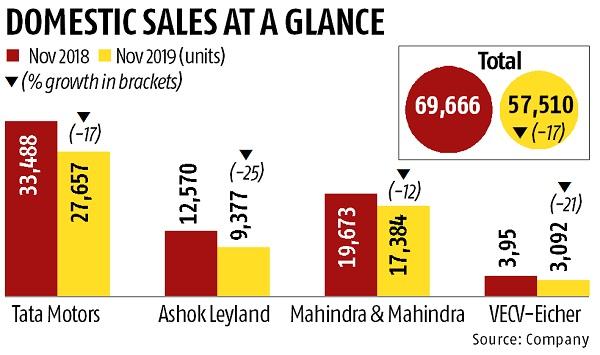 VE Commercial Vehicles Limited, an unlisted subsidiary of Eicher, Motors reported has reported a decline of 21.4 per cent in domestic CV sales at 3,092 units during November 2019. from 3,935 units in the same month last year.


Girish Wagh, president, Commercial Vehicles Business Unit, Tata Motors , said, “As we move closer towards BS-VI transition, focus continues to be gradual stock reduction, with retail sales in November being higher than wholesale by over 10 per cent”. He said M&HCV sales grew by 23.6 per cent over the previous month, as enquiries continued to rise gradually, with fleet owners realising the economic benefits of replacement of their older vehicles. With overall system stocks at a multi-quarter low, and increasing enquiries for replacement demand, the company sees volumes and realisations firming up over the next few months.


Over the past four or five months, Tata Motors’ CV business has cut its systemic inventory by around 29,000 units. The stocks are now at a six quarter-low and dealer inventory is at 35 days.


This sharp reduction in volumes/production resulted in high pressure on profitability, said Motilal Oswal Institutional Equities. “We do believe that the worst of the CV cycle is behind (barring any disruption during BS-VI transition), but a sustained recovery in volumes would be gradual,” said an update from the research analyst firm.


Dheeraj Hinduja Chairman, Ashok Leyland earlier said improvement of the finance sector is one factor that could bring growth back to the industry.


“Banks and NBFCs are showing a lot more appetite for financing vehicles, which is good for us. Second, if the government continues to invest in infrastructure, it will be a major incentive for the sector. Lastly the scrappage scheme, if announced, will boost sentiment.”


Hinduja is of the opinion that this is not a luxury product, and GST reduction will be good for the industry, he said in an interview last month.