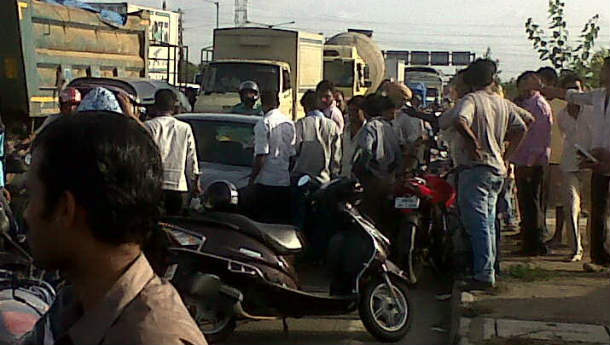 The above picture is that of a crash scene between a motorcycle and a car. The red Pulsar 135LS you see (extreme right) was knocked down at roughly 65 kph by a Hyundai Accent (you can see a little bit of it in the foreground, right behind the parked TVS Wego) on the eight-lane (plus a service lane on each side) Eastern Express Highway that connects Mumbai to Thane. Both were driving perfectly soberly, occupying the second slowest lane, and the Hyundai in question was diagonally to my left, a few car lengths away. I was cruising in top gear on my Duke, a few car lengths behind and in the second fastest lane. And then, the Hyundai's bonnet flipped open.

Understandably startled, the young lad reached for the brakes and veered left. This was a mistake, since by doing so, he had rear(-three-quarter)-ended the Pulsar riding gentleman (with a cheap lid) who got thrown off the bike and slid around a fair bit, his motorcycle following closely, until he came to a stop and just lay there. Worryingly, a dozen or so vehicles had come screeching to a halt at the sight and this nearly caused a massive pile-up. Within seconds, five motorcyclists had pulled over (including me) and four rushed to the motorcyclist. I walked to the young, 20-something chap at the wheel of the 'culprit' Hyundai and he was, very obviously, completely shaken and rather scared. “It's not exactly your fault...calm down...turn your hazards on. We've seen what happened, and it's not your mistake”, I said to him, assuringly. This seemed to have relieved him slightly as his immediate thought would have been 'now I'm going to be thrashed by an angry mob...'

The man on the Pulsar had a few bruises and a broken ankle (and perhaps a few internal injuries as well), but worst off all, and not surprisingly, he was in a state of shock. I'd requested the concerned souls to not lift him up forcefully until he gave them the approval. Then, a set of angry people ordered the car guy to take the man to the hospital. This was fair, since it was his car that had caused the accident and the car guy was absolutely uninjured, only dazed. No one thought the car was unfit to be driven and that it could flip open the bonnet again. Fortunately, nothing as such happened.

At the toll plaza 2 km down the road, I pulled over and informed two traffic constables stationed there about the accident and requested them to direct the car to the nearest hospital since the chap driving it could be unfamiliar with the area (assuming so, since it was a Delhi registered car). Both the parties would have made it home that night, there is no doubt about it. But can you tell me whose fault it was? If, let's say, the motorcyclist was killed, would the police charge the driver for 'death due to negligence' or the rider for 'suicide' since he was wearing a cheap lid and chappals?

For solutions, driver training in emergency panic situations is a good idea, but I can't imagine novice drivers pulling off cool J-turns, RTO instructor on-board, with the bonnet determined for freedom. Simulators are the next best idea, but just because I'm faster than Sebastian Loeb around the Alps on the PlayStation doesn't actually mean I am. Grand Theft Auto Vice City too has this kind of provision, but by the time the bonnet on the Ford Mustang lookalike rips off entirely, you've run into a water feature in the City Centre. This, I believe, can't be very pleasant. I hope you will help me find an answer to my question because this accident is something even following lane discipline and speed limits couldn't prevent.