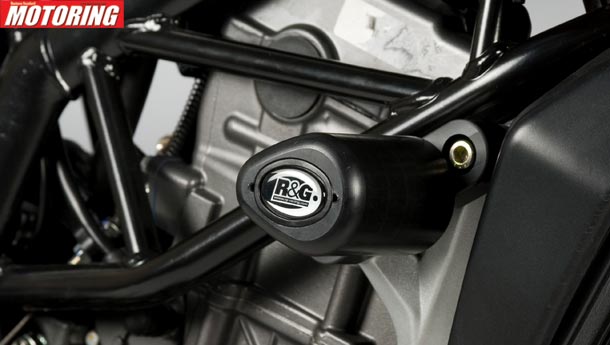 Now that you’ve splurged your savings on a spanking new KTM Duke 200, it makes sense to kit it out for the big bad world. No, we aren’t suggesting that you rig your ride with a Gatling gun for those imbeciles that sadly infest our roads, though if you do, we’d love to feature it. Anyway, merely tipping a bike off its stand could scuff the fairing and a minor spill is all that it takes to require you pinching cash out of your son’s college fund to pay for repairs. A leading manufacturer of motorcycle crash protection, British firm R & G has come to your rescue, thankfully. Engineered specifically for the Duke 200, the company’s Aero Crash Protectors are designed to bolt on to the main engine mounts of the bike and keep as much of the motorcycle’s flanks off the ground as possible during a crash. Constructed out of Polyethylene that scrubs rather than breaks during impact, the crash bobbins are held in place using steel bolts that will absorb the brunt of the force by bending rather than transmitting the shock to the bike itself.

Apart from crash bungs, the company also produces protection for the Duke 200’s engine cases, forks, radiator and exhaust. Oh, and the tail tidy kit will really lighten up your motorcycle’s rear end, so to speak. Check out www.performanceracing.in for more details.