India’s top automakers have decided to not resume production even as some of their manufacturing units that met the location-specific guidelines laid down by the Ministry of Home Affairs (MHA) could have started production on Monday, said top executives at various firms.

They cited issues related to supply chain, labour availability, and a stockpile of models at the factories and dealerships as reasons. Cumulatively, automakers, including Maruti Suzuki India, Hyundai Motor India, Tata Motors, Honda Cars, and Volkswagen Cars, have an unsold stock of close to 212,300 cars. This is equivalent to one month’s sales in the domestic market.

RC Bhargava, chairman at Maruti Suzuki India said the company has taken a call to not resume production though its unit got the permission. “We have decided not to start production as while we have been allowed to start production in Manesar it has not been permitted in Gurugram. As the two are integrated it is not possible to open one without the other,” Bhargava told Business Standard.

Toyota Kirloskar Auto Parts has also got the government’s nod to resume production, said Shekar Viswanathan, vice chairman at Toyota Kirloskar Motors. The unit makes gear boxes and exports it to Toyota’s plants across the world.

“It will take some time before it can start production as the TKAP’s human resources are scattered all over Karnataka,” ,” said Viswanathan.

Some of the other auto factories that have got the permission to resume production include auto manufacturing units in Pantnagar in Uttarakhand. It includes units of Bajaj Auto and Tata Motors among others. A Bajaj executive confirmed it has got the requisite approvals for the plant. However, the company was interested in completing its export orders which cannot happen unless production from Chakan, Maharashtra.

To be sure, none of the factories in the Chakan belt have been allowed to start production.In chakan no opening has happened at all.  Even for other auto hubs including, Rajangaon and Talagaon factory opening hasn’t been allowed due to rising number of Covid-19 cases in Pune. In Tamil Nadu, the State government has taken a decision not to allow any factories to open till May 3.

Referring to Toyota Kirloskar Motors, Viswanathan said Toyota is no hurry to start production. “All the dealers are shut. Unless you can sell, what’s the point in producing and stocking?”  Even our supplier partners are struggling to get the human resources in place. It’s a long haul on the road to recovery. Even after the lockdown is lifted on May 3, it will still take industry another 15 days to start production.  It will take Toyota almost 20 days to a month to sell the stock of BS-VI models — close to 8000 units will take us a month to get rid of the stock, he said.

“To the set wheel rolling, will be a daunting task for automotive industry,” said Puneet Gupta, associate director at IHS Markit. “No customers would be thinking of buying a car. So there are demand challenges and on the other side it’s a challenge to activate the entire supply chain.

Car manufacturing is too complex and it will be difficult to run these companies until the entire lockdown is over. Also running the factory with conditions laid down by government will further be too taxing for Car manufacturers/suppliers, added Gupta. 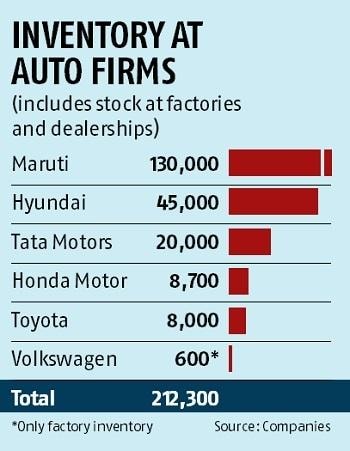