Corporate India is bracing for higher economic losses — as a result of the lockdown being extended till May 3 — with the figure estimated to rise to $26 billion a week, from $16.6 billion earlier.


“India may be losing close to Rs 40,000 crore daily ($5.25 billion) because of the lockdown, with an estimated loss of Rs 8 trillion during the past 21 days. It is also expected that close to 40 million jobs are at risk during during April-Sept 2020,” said Sangita Reddy, president of Ficci.


The economic loss has widened mainly due to higher-than-expected output loss in the agriculture, utilities, construction, wholesale and retail, as well as metals and mining sectors. Earlier estimates focused on losses incurred by the travel, tourism, airlines, and hotels sectors. Despite flush with additional liquidity, banks are reluctant to fund medium and small companies while focusing on the large corporates.

"There is fear among the banks to extend loans. It's time bank officials should be assured that they won't be harassed if they sanction loans to medium and small sector companies  — which employs the maximum number of people," said head of a mid-sized infrastructure company.


Pawan Munjal, chairman of Hero Motocorp, said a stimulus package was essential for the economy to rebound, and that a graded relaxation would help re-open factories.


“While continuing to play its role in supporting the government through various means and measures, India Inc looks forward to a suitable stimulus package that will give a boost to our economy,” said Munjal.

The chairman of a large diversified group said the extended lockdown would result in negative GDP growth, but corporate losses could not be quantified so early. “There are too many estimates of losses but one thing is for sure — India may not see positive economic growth for rest of the fiscal year, unless some relief package is announced,” he said.

In a meeting between business leaders, bankers, and government officials organised by Ficci on Tuesday, some chief executives (CEOs) sought interest-free loans, extension of the moratorium on loan repayments to six months, and relaxation in tax payments for few months. 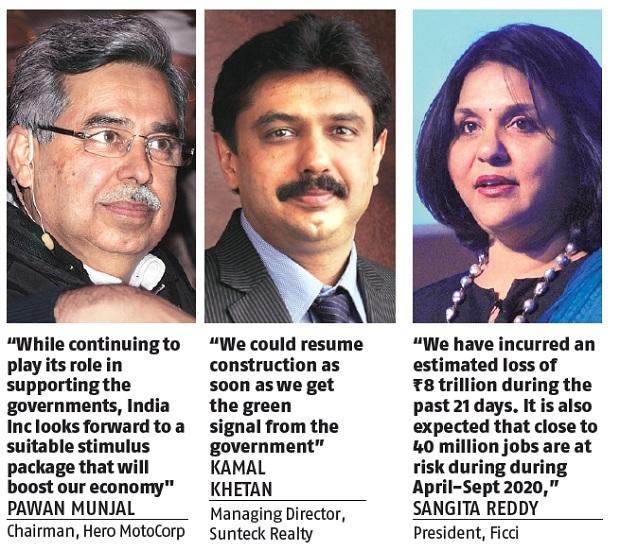 Rajneesh Kumar, chairman of SBI, however said the ball was in the Reserve Bank of India and government’s court, and that as a bank, it would also have to keep depositors’ interests in mind.

CEOs said that without a proper financial package, it would not be possible for them to pay their employees. “Salary cuts have already begun and lay-offs will follow, given there is zero cash flow,” said the head of a non-banking financial company.


Given the shortage of labour, CEOs said project sites are currently deserted and the government must decide on the gradual opening up of green zones — where no Covid-19 cases have been detected.


“It makes sense to operate with 20-30 per cent capacity, as it would ensure labour in the region, operation of plant and machinery, and some cash flow for contractors and clients,” said Ramesh Nair, managing director (MD) of real estate advisory firm JLL.


Nair said that the government could release raw material in a controlled manner. Various options of single and triple shifts are being discussed among industry groups, which may help solve the challenge of physical distancing.


Some CEOs said they could work with lower capacity and restricted shifts, as most of their workers are already residing at the project sites. “We could resume construction as soon as we get the green signal from the government,” said Kamal Khetan, MD of real estate firm Sunteck Realty.