Contest of the crossovers

Over a decade ago, Fiat launched what could possibly be defined as India's first crossover, the Adventure, which was based on the Palio station wagon. It had a bull bar in the front, ski rails on the roof and had side body cladding that made it look like Mike Tyson ready for his next bout. Unfortunately, the Adventure never did the numbers the Italian car maker was hoping for. I too must confess I thought it was a fabulous effort by Fiat to think outside the box. There wasn't any real problem with the Adventure. But the so-called crossover was killed by the company's rather inept servicing issues.

Flash forward to 2014, and we suddenly see a lot of choices in this growing segment. Volkswagen revived the crossover class with the Cross Polo in August last year. It was followed by the Toyota Etios Cross, and now Fiat has come out with the Avventure, whose name evokes the trail blazed by the Adventure. Before we get into all the details, let's put the record straight: none of these cars is a true sports utility vehicle and none of these is a 4x4. Only a minute fraction of buyers actually go off-roading, and so it is pointless to have all-wheel-drive crossovers. However, there are three good vehicles out there now. Which among them is the crossover king?

I have to be honest. Only one car stands out when it comes to looks: the Avventura. While the Etios is more of an eyesore, the Polo, well let's just say that it's a German car, and so it continues to have an understated yet distinctive presence on the road. The Fiat definitely stands apart and this has a lot to do with the huge mounted spare wheel at the back. The black side paddings and the chunky front bumper give the Italian crossover a rugged look. Its extended headlamps ensure the Mediterranean flair is very prominent, while the roof rails project a no-nonsense, can-do image. Though the Avventura is only the beefed-up version of the Punto, its suspension setup has been tightened to ensure it stays planted while taking fast curves. What is impressive is that the stiff suspensions do not affect the ride quality. With 205 mm of ground clearance, it rides high above the potholes and the bumps. This best-in-class clearance even matches that of some SUVs. The Avventura comes with additional under-body protection in the front and rear. 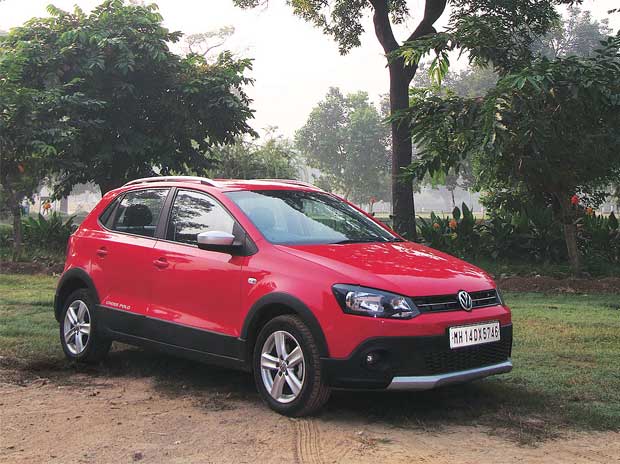 The Cross Polo, like the Fiat, has black matte body cladding, but though the ground clearance may look higher, it is actually the same as in the standard Polo. It's not all about macho looks only, because the crossover has under-body protective plates. It does come across as a brawny Polo, but unlike the Avventura's 16-inch alloy wheels, the Cross is fitted only with the standard, if skinny 15-inch rubber set. Like all Volkswagen cars, the Cross provides excellent ride quality and handling also remains razor sharp.

The dark horse, and might I add, the most successful of the three crossovers in terms of sales, is the Etios Cross. It may have been the butt of jokes for its ordinary fittings, but it is Toyota that is smiling all the way to bank. The Japanese car has, unexpectedly, become quite popular, and you get to see quite a few on the road. From the front, it looks bolder than its hatchback sibling, the Etios Liva, and like in its two rivals, a lot of black plastic cladding has been used to give it a sporty look. The ride quality is ideal for Indian roads as the car soaks up the potholes. Handling too is fairly good; I find that the Etios Cross does not understeer like the Etios Liva.

At this point of our review, we would have to concede that the Avventura is ahead of the other two. But let's look at the stuff that matters: the performance. 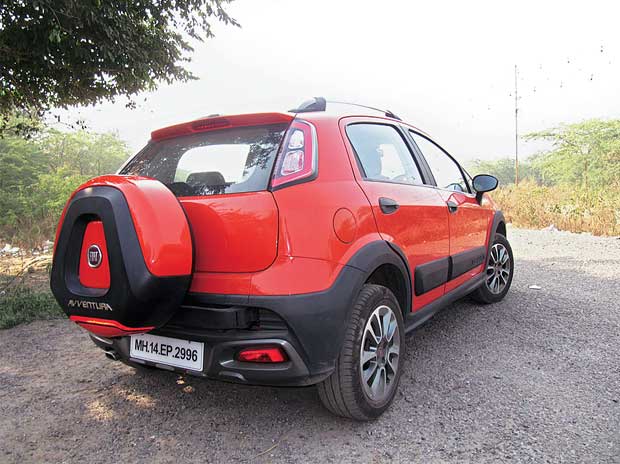 The Avventura is powered by the 1,248-cc mulitjet diesel engine that has a tendency to keep you waiting till the rev needle hits the 2000 rpm mark. This lag can get a bit annoying in slow city traffic. The mid-range is where the Fiat cruises at ease and it is then that you realise what a pleasure it is to drive. The interior is spacious and the dual black-grey cabin looks sporty, though the build quality could have been better. It is the only crossover that comes with a compass and clinometers that display the roll and pitch of the car. This cluster is neatly placed above the centre console. This is a nice touch.

The most notable change in the VW Cross from its hatchback version is the new 1.5-litre engine. You hardly notice any noise from under the hood and when you step on the pedal, you instantly realise just how much more refined this engine is than the one it has replaced, the 1.2 litre of the hatchback. While there's still a hint of turbo lag at revs below 1,800 rpm, the power delivery is now far more linear than earlier. The Polo Cross has a strong mid-range, which builds up without any fuss all the way to 5,000 rpm. This power plant is in another league altogether.

Comparably, the Toyota crossover's 1.4-litre engine has the least number of horses: 67 bhp. It has linear power and does not push you, which makes it a very good commuter vehicle but not an adventurer. The good thing is there is hardly any initial lag even if the engine is very noisy and it can get quite uncomfortable in the cabin. The all-black interiors are a huge improvement over the fare in the standard Liva. The Etios Cross now comes with a 2-Din audio system with USB, AUX-IN and Bluetooth. The steering wheel, which has audio controls mounted on it, is stylishly ensconsed in leather.

The Avventura led when it came to style and design. But a car is more than just its looks. Choosing the eventual winner among the three is not easy because each has a particularly important factor going in its favour. When it comes to driving dynamics and build quality, it is the Cross Polo that is ahead. The most stylish is the Avventura. It also has more features than the other two cars and gives the impression of being an off-roader. Toyota's Etios Cross offers value for money, is spacious, a smooth operator on the roads and has a great service network. So these are the pros and cons of the the contesting crossovers. I will let you be the jury and judge.