A sharp four per cent fall in the share price of Hero MotoCorp – the country’s largest two-wheeler maker – on Monday has rekindled fears of a further downslide in consumer stocks.

Consumer stocks, especially the makers of big-ticket goods such as two-wheelers, passenger car makers and home appliances have seen heavy selling in the last six months.


This is because investors are worried about demand slowdown amid liquidity crunch for non-bank lenders and a general slump in consumption.


The combined market capitalisation of companies, such as Hero MotoCorp, Maruti Suzuki, Bajaj Auto and Havells India, is down 17.2 per cent year-to-date in 2018 and 6.5 per cent in the last six months.


The benchmark BSE Sensex has risen 4 per cent during the year so far. The result has been a sharp de-rating in companies’ valuation with these stocks currently trading at 26 times their trailing 12-month earnings on an average, down from peak valuations of 34x at the end of last year.


The analysts see more downside for consumer discretionary stocks given a likely earnings slowdown in the sector, growing macro-economic headwinds and rich valuations.


“We prefer investments over consumption as most stocks remain over priced and with a risk of earnings per share (EPS) cuts. Consumption growth is starting to slow but misplaced expectations of pre-election handouts are keeping the price-to-earnings multiple elevated,” writes CLSA in its report. The brokerage house sees the highest risk in the food & personal care space (consumer staples) where most stocks continue to rally despite recent concerns about a slowdown in consumption growth. 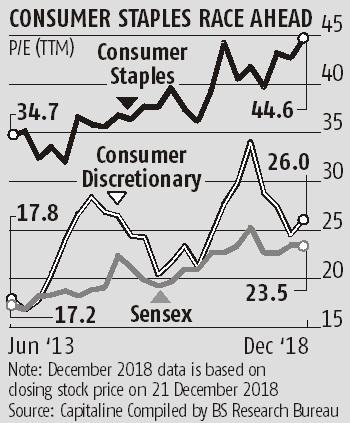 The combined market capitalisation of consumer staples companies such as Hindustan Unilever, ITC, Nestle, Dabur, Colgate-Palmolive and Godrej Consumer, among others, is up 20.8 per cent, year-to-date and eight per cent in the last six-months, beating the broader market by a large margin. These companies are currently trading at nearly 45x their trailing 12-month earnings, the highest in about five years and nearly 700 basis points higher than their five-year average P/E multiple of 38x. One basis point is one-hundredth of a per cent.

Others say that the downside risk largely comes from high valuations. “Our channel checks suggest that slowdown is largely in the auto and home appliances space, while consumer staples companies continue to grow in double digits. The growth is, however, not high enough to sustain the record high valuation in the sector,” said Dhananjay Sinha, head research Emkay Global Financial Services.


The combined net profit for consumer discretionary companies was down 4.6 per cent year-on-year during the September 2018 quarter, their worst show in the last six quarters. FMCG firms did better with 17.8 per cent yoy growth in their earnings in second quarter. This is lower than the growth recorded in the first quarters and is keeping investors on the edge.