Chevrolet Sail U-VA along with its sedan twin, the Sail, is getting a facelift to fight a better battle against its competition. was supposed to bring more sales to the bow tie brand along with the Sail U-VA hatchback twin. As a replacement for the Aveo twins, the Sail and Sail U-VA didn’t actually set the sales charts as expected. To try and inject more interest in the cars, Chevrolet is launching the facelifts of the Sail sedan and Sail U-VA hatchbacks. As the new Chevrolet Sail is ready to fight with renowned enthusiasm, we do a competition check on how its rivals are faring in the market. 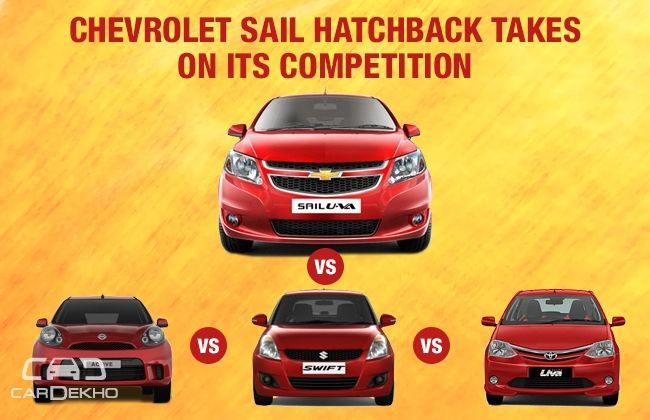 Along with the Swift Dzire, the Swift twins have been on top of their segment for quite some time and without any real competition.  The Swift gets the same engine lineup of the Dzire. The petrol is powered by a 1.2-litre engine pumping 86 hp at 6000 rpm of maximum power and 114 Nm at 4000 rpm of maximum torque. The diesel gets a 1.3-litre with a maximum power of 74 hp at 4000 rpm and maximum torque of 190 Nm at 2000 rpm. Both the engines are available with a 5-speed manual transmission while but there is no automatic transmission for the Swift, which the Dzire gets. Maruti Suzuki Swift is a peppy driving car with good looks and better brand value but rear seat space is still a sore point. Toyota Etios Liva

Again, Etios Liva is to Toyota what Sail U-VA is to Chevrolet. The Toyota Etios Liva also gets a petrol and a diesel engine lineup. The petrol is a smaller 1.2-litre engine putting out 79 hp at 5600 rpm and 104 Nm of torque at 3100 rpm, while the diesel is the same 1.4-litre engine that powers the Etios sedan making 67 hp at 3800 rpm and a peak torque of 170 Nm at 1800-2400 rpm. Both engines are fitted with a 5-speed manual transmission. Here again, the cheap interior build and finish are against it but the new Etios Cross may balance things to some extent.  Nissan Micra

Though being a good car with great space and nice peppy engines, Nissan Micra failed to find many takers. The Micra facelift that came a while ago tried to liven up the styling with reworked grille, new bumpers, new headlamps and tail lamps and some interior upgrades as well. The petrol Micra gets a 1.2-litre unit with a 75 hp output at 6000 rpm with a maximum torque of 104 Nm at 4000 rpm while the diesel Micra is powered by a 1.5-litre unit making 63 hp at 4000 rpm and 160 Nm of maximum torque at 2000 rpm. Both engines are mated to a 5-speed manual transmission while automatic transmission is available with the petrol version.