Competition Check: Maruti Suzuki Celerio Diesel vs Beat vs Grand i10 vs Figo

Suzuki has made global debut of its first ever in-house developed diesel engine today and Celerio being the first car to get this engine in the portfolio - which puts it into the territory of its rivals oil burner counterparts. Let’s see how it fairs on spec-comparison with its puny 793 cc diesel! 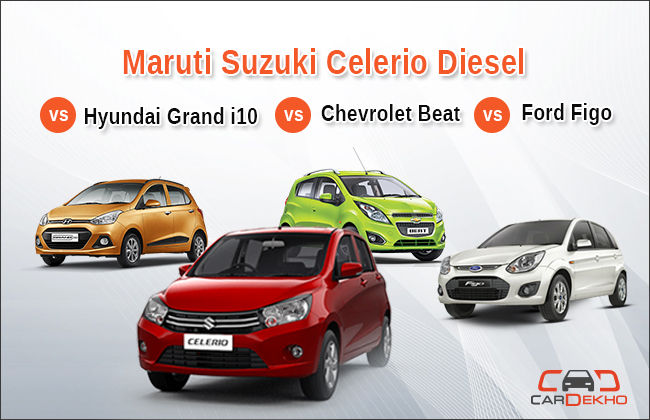 Maruti has embarked on yet another diesel story, first it was the Swift back in 2007 with a Fiat sourced 1.3-liter Multi-Jet motor. Now, Suzuki has developed from scratch their first-ever diesel engine and it's a small 2-cylinder turbocharged unit. We have put the Celerio DDiS125 against its rivals - Chevrolet Beat, Hyundai Grand i10, and Ford Figo. Spec-Sheet Comparison - Celerio vs Beat vs Grand i10 vs Figo 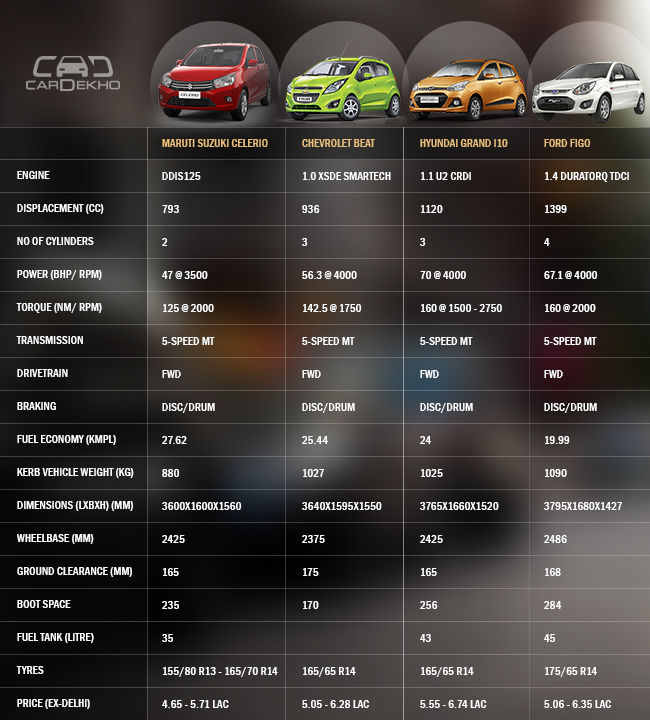 Celerio no doubt is the least powerful here but is also the most lightest of the lot and that too by a whopping 140+ kilos when compared to Grand i10 and Beat and 200+ kilos lighter than the Figo.   Comfort and Convenience

Hyundai Grand i10 is the most feature loaded car here, indeed, justifying itself as the costlier one out here. To start with, it trumps with features like passive keyless entry with engine push button start-stop system, rear AC vents, audio system with built-in 1 gigabyte of storage, cooled glove box and electronically foldable outside rear view mirrors.

Except Chevrolet Beat, all the three cars offer Bluetooth phone connectivity and audio streaming with steering mounted controls. Apart from the Bluetooth, Celerio does not offer anything surprising. Adding on the Beat, it gets first-in-segment digital+analog instrumentation cluster and one the nicest looking cabin.     Safety

All the four in this comparison offer same safety features - Dual front airbags along with ABS (Anti-Lock Braking System) and EBD (Electronic Brake-Force Distribution). This said it's only the Ford Figo and Maruti Suzuki Celerio that offer driver side airbags from the second last variant, however, ABS+EBD is added only in the top ends. The Grand i10, Beat offers dual airbags and ABS+EBD only in their top end trims.   Prices

Celerio undercuts its closest rival Chevrolet Beat considerably with a little over Rs 40,000, same with Figo too. While when compared to Grand i10, Celerio starts close to 90,000 less! Speaking of the top-end, Celerio is the only car in that close under 6 lac bracket, top-end trims of the rest three are over 6 lac bracket with Grand i10 being the costliest one.