German luxury car manufacturer Audi has finally brought its updated compact SUV Q3 to the Indian shores. The current Q3 is doing good in its element till now but the competition is catching up quick, especially the Merc’s GLA-Class. While BMW X1 and Volvo V40 Cross-Country are maintaining their own niche. Let’s take a look at what makes the Q3 rise up from the rest of its counterparts. 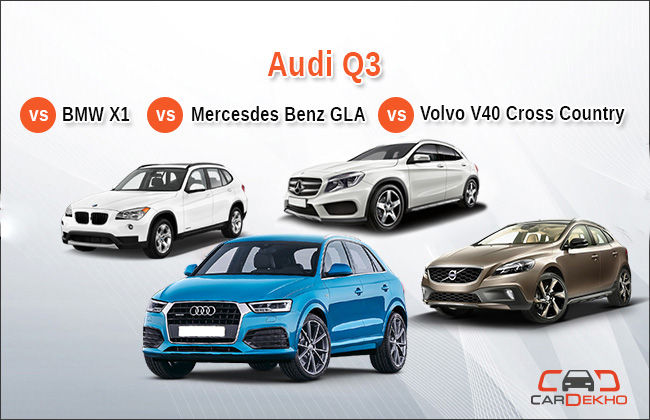 This is one place where the Q3 has received considerable amount of change. The most prominent is the single frame satin chrome grill, a refreshed set of headlamps with new daytime-running-LEDs. The sides get new set of alloy wheels while the rear get minor updates to the bumper and taillights. These aren’t anything over the top but yes, they are better than before, still the GLA matches its look if not the X1 and the V40 Cross Country. 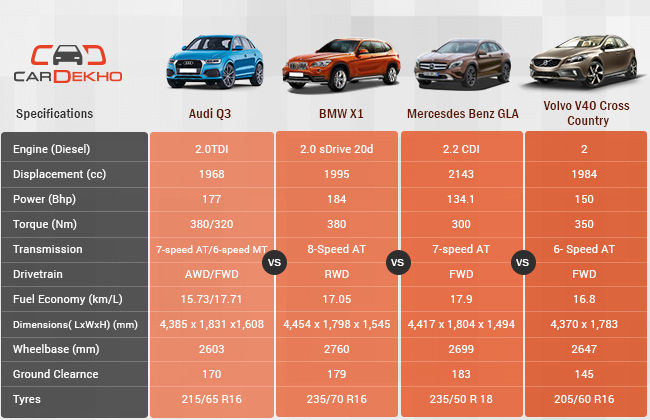 When comparing the insides, Q3 loses a bit when compared to GLA, as interiors in the former are the same as before except for the satin chrome trims, paddle shifters and a new MMI infotainment system that are added to make the car look fresher. The GLA appears great on the insides as well and many times more against Q3. While BMW’s interior too are waiting for an update but they still match up with what Q3 is offering on the inside. V40 Cross Country is a different story altogether and offers tad simple interior, though they are quite contemporary. Engine:

Q3 retains the same 2.0 litre TDI motor mated to the 7-speed S-tronic that sends power to the Quattro AWD system and a 6-Speed manual transmission in the S variant. This is the only vehicle in the segment that gets an AWD system. V40 and GLA-Class are forward wheel drive while the bimmer is rear wheel driven.  Price:

Q3 has been priced at Rs. 28.99 lacs while Mercedes has priced GLA-Class at a base price of Rs. 32.8 lacs. BMW X1 price starts at 30.8 lacs while the V40 Cross Country is tagged at Rs. 27.0 lacs (all prices ex-showroom, New Delhi) for the bottom-most variant. Looking at these figures, the Volvo car is the cheapest of the lot but the sales and service network pushes it on a backfoot. Furthermore, the X1 is awaiting a facelift too - the current low sales reflect that. All this makes the Q3 a better choice to go for when considering the base variant. However, for top end trims, GLA is still the favourite.