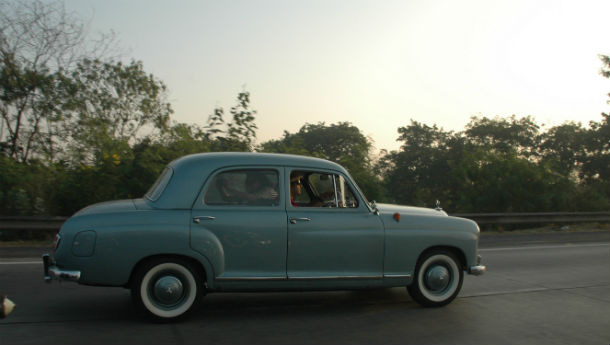 This time the list consisted of mainly classics - the Rolls Royce of Mr Dhondy which kept up with all of us without a hitch. We had three Buicks from 1948, 1949 and 1953. A pair of Mercedes SLs, a beautiful Mercedes 180 B diesel,  three VW Beetles of which two were convertibles and one sedan, a 1946 Packard coupe, a 1947 Plymouth from Pune, a 1954 Dodge Kingsway convertible, a 1957 Fiat, a lovely 1957 Bel Air convertible and a very  unique Dodge Custom Royale, a Ferrari and a tow truck

The plan this time was to meet up at two places – near the Sea Link in Bandra and also at Sion. Though there were some delays in reaching, we departed Bombay at 7am approximately. We had a smooth drive, just our convoy of classic cars with a whole host of onlookers and other road-goers admiring our cars and taking photographs too. Although it was scary when people driving decided to try and take photographs – god save them!

Mr Dhondy and family joined us from Lonavala as we headed to our destination of Sayaji at Pune for a much-needed breakfast. It was a smooth drive with no glitches except for traffic at all toll booths in the morning . The 1949 Buick  did however suffer a flat tyre, which was quickly fixed and off we went. The weather was our greatest friend as it allowed a very comfortable drive for some of us including me rolling up the windows or getting the tops of our convertibles up to feel a little warmer.

We left the Sayaji Hotel around  10am in different groups and after a poolside breakfast.  This was followed by a mandatory stop at a sugarcane juice vendor just before Wai. Both man and machine were topped up and checked before we went p the ghats. The drive up was comfortable, with some of us tailing the pros. Everyone reached in time to have lunch and a much desired afternoon rest. Eventually some of us got back into the cars for basic mandatory brake checks but things were all clear.

The Mahabaleshwar Club and its ambience was just so pristine and perfect with so much history behind it. The rest of the evening was spent talking about cars and exchanging of notes.

The next morning went in underhood inspections and checks, a screw and spanner here and there, but all mostly well. But we had to send the Plymouth back to Pune as it was analysed and checked and we decided it would be best to load it and send it back. The rest of the day went by pretty fast.

The next morning we set about to the town of Wai for refuelling and headed straight for lunch to Holiday Inn where the spread of the buffet was so large it was thoroughly worth it.

The return trip on the Expressway saw only motorists and their companions admiring the beautiful classics as they gracefully glided over the road. Everyone was home without a hitch by evening and thus came the end to another wonderful run. Another one has been planned for the 25th to the 27th of January to the Sula Vineyards. We can’t wait!