City's got a rival

Maruti Suzuki has always ruled the roost when it comes to the small car segment in the market. And it is this perception that the company has set out to change with its latest offering, the Ciaz. The consumer response to the Baleno (discontinued in 2007), SX4 and Kizashi had been lukewarm, to say the least. In fact, the Kizashi was discontinued within less than two years of launch in India.

An added concern the company has to address in the mid-size sedan space is the serious and well-established contenders: Honda's City and Hyundai's Verna. Market leader City has been Honda's flagship car for over a decade and has grown volumes by 210 per cent at 30,447 units in the first five months of this financial year. The Verna, with its sporty fluidic styling, has a fair share of buyers in the category.

The significance of a product intervention from Maruti Suzuki in the mid-size sedan space can perhaps be gauged from the fact that the model is being commercially launched within nine months of the concept being unveiled by the car maker at the Auto Expo in February. The car has been designed not only to stretch Maruti Suzuki's presence in a segment it has previously not been comfortable in, but it is also the first of many more products the company plans to launch in the premium category. For starters, the company is scheduled to drive in the S-Cross and a larger sports utility vehicle in 2015, followed by a compact SUV (based on the XA Alpha) in 2016. 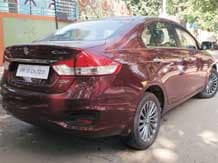 I took a spin in the diesel-powered Ciaz ahead of its launch in October to find out what you can expect if you decide to buy the car.

Built on an all-new platform, the Ciaz is sleeker and more well-equipped, compared with the SX4. It can proudly claim the longest wheelbase in the segment and clearly looks bigger than counterparts the City and Verna. The chrome finish on the door handles gives the car a premium touch. Overall, the styling is clean and uncluttered, if unadventurous - a draw away from both City and Verna which sport bolder design lines. In the Ciaz, the idea is to keep the design conservative, particularly when you view the vehicle from its sides, to appeal to a larger spectrum of consumers. The projector headlights are finely detailed and add a bit of sportiness. The rear cluster, however, does remind one of the new City.

The interiors are generously spacious. Three adults can comfortably spread out in the rear seats, which are snug and comfortable, especially for the back. There is impressive leg space. The adjustable rear AC vents add to the comfort of the passengers. At 510 litres, the Ciaz also has the largest boot in its class.

The dashboard is neat. The wood accents and the chrome detailing around some of the knobs impart a touch of the premium. The power window switches and the door locks do bear a resemblance to the fittings in other Suzuki cars. The plastic quality is good and the design features of the interiors look well executed. The central console is dominated by a 7-inch touchscreen infotaintment system that is available only in the top Z+ variant (other variants are called V, V+ and Z). The touchscreen has a simple user interface, the screen is divided into four quadrants, two dedicated to phone functions and the others to navigation and audio. The Z+ version also comes loaded with twin airbags and 16-inch alloy wheels.

The Ciaz comes strapped with Maruti Suzuki's 91-bhp, 1.4-litre K-Series petrol and the 89-bhp, 1.3-litre DDiS diesel engine. The engineers have worked on the diesel engine that the company sources from Fiat to improve the driveability of the sedan. The diesel version that I drove was energetic, though a tad lethargic at lower speeds, at least till the turbo kicks in. In city traffic, the car delivered a fuel efficiency of around 19 kmpl, and this will probably prove to be attractive to potential buyers.

However, where you will have reservations is the gear shift, which I found to be somewhat stiff- and it did not respond smoothly. However, the Ciaz scores on ride comfort. The suspension system is well-developed and the car easily manipulates bumps, the bane of Indian roads. At higher speeds on highways, the car feels stable and well-secured.

The Ciaz appears to be a well-rounded product. Though conservative in styling, the car is spacious and easy to drive. It has neither a bold design line, nor the peppiness that enthusiasts may be looking for in a product in the segment, but the car suitably addresses the needs for comfortable and affordable commuting. The Ciaz has high fuel efficiency, and given that it is a Maruti Suzuki product, service will definitely not be one of its disadvantages. What the company has to do now is to price it competitively. The Honda City is currently tagged between Rs 7.19 lakh and Rs 10.96 lakh for the petrol versions and between Rs 8.37 lakh and Rs 11.05 lakh for the diesel powered options. Will the Ciaz come for less and thus trump its rivals? Let's wait and see.