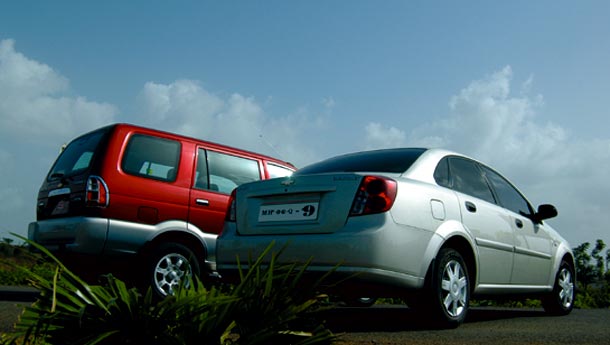 Let us accept it, both these machines are capable of spinning one Mr Louis Chevrolet in his grave – both are as American as sushi and all Corvettes of this world will get together at a cliff and jump off it if someone dare call any of these vehicles its distant cousin. GM got the first as a result of a timely takeover of a debt-ridden Korean giant and the other came out of one of the many strategic alliances they have in the Asian region. One burns petrol and the other likes the sticky fuel. One can seat five and the other can squeeze in double that. One, dear readers, is a proper car while the other, an aspiring SUV. Our road test editor who goes by performance numbers for everything from pressure cookers to bathroom fittings took the side of the Optra while the editor, the eternal under-dog lover, landed himself the task of defending the Tavera. Gentlemen, tighten your bow-ties.

Back to basics
All right, if I have to pick one of these, then it will be the Tavera. Now that I have said it, let me get on with the job. Call me utilitarian or any other bad word if you want but I like the idea of a lot of sheet metal for my money and the Tavera has as much as the international space station and has something which even NASA forgot to add – a quartet of wheels. C’mon Sameer, think of it – when I buy a Tavera, I am being absolutely honest about my intentions – that of ferrying my family, friends, relatives, sworn enemies, total strangers and Jumbo, the two year old African Elephant that I recently gifted my children. Okay, ignore the last one, but as you would say – it is not that ‘I would,’ but that ‘I could.’

I really don’t care about the Chevy badging but I have been a motoring journalist long enough to know that under the skin of the Tavera lies an Isuzu. Do you know what Isuzu stands for? Reliable in English, fuel efficient in Japanese and capable in Lucknowi. Accepted, I was a bit worried about the engine being built by HM (despite the reassuring fact that they make sophisticated cars such as the Ambassador) but General Motors India has comforted not just me, but my neighbour’s aunt too with a 1,50,000 km powertrain warranty. That means, I can travel all the way to moon* without losing any peace of mind.

It’s got enough ground clearance to travel on our roads, if not the lunar surface. Good luck to you mate, as your Optra grinds to a halt at the third speed-breaker it encounters.   The Tavera is not a performance car and when I want to travel really quick with my family, I will trust a plane and when I want real good handling... er, I will take a train (did someone say ‘as if on rails?’). But this is an honest machine that manages to look decent and do its job of ferrying people admirably.

Living delights
Remember, it’s I who tested the Octavia, Corolla, Elantra, Optra and the Tavera, so I should know. The thing is, Daewoo underpinnings or not, the Optra is a very capable car that’s also great fun to drive. Especially the 1.8, though the 1.6 isn’t too far behind either. As for the sheetmetal, are you kidding me? What would you rather drive – a Lotus Elise or a Chevy Suburban? I want my cars light and lithe, lean and swift. And the Optra’s 115 bhp, 1799cc engine has enough grunt to make sure I don’t die of boredom while driving. And as for visiting friends and relatives, the Optra does have enough space for five people. The rest can take a cab...

The Optra doesn’t come with a warranty as comprehensive as the Tavera’s, but I seriously doubt if it’ll have any major problems for the first 50,000 km at least. After which I should be looking for a replacement anyway. The Optra will certainly be at least as reliable, fuel-efficient and capable as the Tavera and in a crash, the monocoque Optra will also be much safer than the body-on-chassis Tavera. I’d certainly feel happier if my family were travelling in an Optra, rather than a Tavera.

Bottomline is, the Tavera is a dated UV, one that’s best left to tour/taxi operators, whose only mission in life is to squeeze in as many people as possible in one car. The Tavera’s interiors are dated and it bounces its occupants around on bad roads. Its brakes too, aren’t confidence-inspiring at all. The Optra is built to contemporary passenger-car standards, has a very plush and comfortable ride quality and I’d be proud to own one. Certainly wouldn’t want to drive down from Mumbai to Goa in a Tavera, would you? Trust me, the Optra is the Chevy to buy!