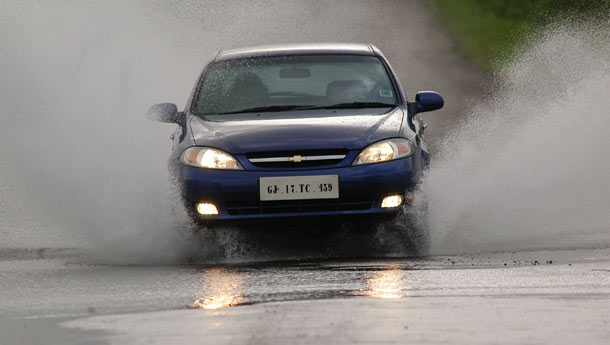 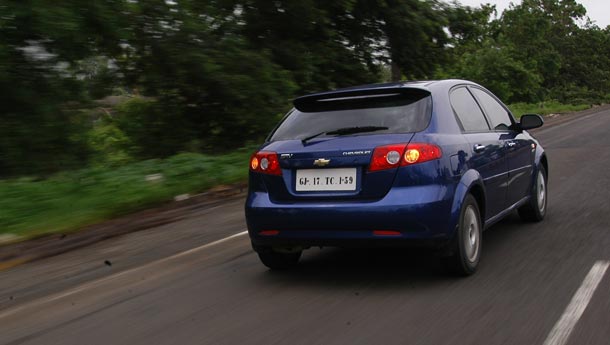 The Chevy SRV is coming to us like the perfect but late birthday gift. You are surprised to get one after you have ripped through the wrappers of everything else, yet it is sad because you know someone forgot your birthday in the first place. Still you love it because it is exactly what you’ve always wanted. Let me explain.

There was a time not so long ago when the enthusiast driver in India longed for a car with a modicum of performance. No, that breed was not looking for hyper exotics that they would never be able to afford, but a well built, sporty looking car that developed a minimum of 100 bhp (hello, 100 bhp on Indian roads is equivalent to 150 on European roads, trust me) is what they wanted. Some solace came in the form of the Honda City VTEC – it had the engine and the go but lacked looks and everything else. The Fiat Palio 1.6 GTX promised a lot and satisfied those who committed – but then Fiat had its share of worries in India.  Sure there were more powerful cars, but they weighed an additional tonne and had far too many zeroes in their price tags.

Right when this breed decided to bury their hopes and buy another Honda City VTEC (again 100 bhp, you see) or worse still, settle for a red Swift (it is kind of er... sporty), comes the Chevy SRV. Alright, it is a fastback based on the Optra, but who cares – it looks right. Just right.

It actually looks like a design study submitted by Italdesign to Alfa Romeo and rejected by the Milanese firm because it smiled too much. The front end treatment is very ‘90s Chevrolet, but the rear-three quarters and even the profile owe it to sporty front-wheel driven Alfas of late. Especially the tapering rear taillamps.

So you may argue that it is the hatchback version of the Optra. But it is a ‘proper car’ in the traditional definition of things. The new generation Daewoo Nubira which resides under its skin was designed and developed with European customers in mind. And it feels like a loosely built Opel rather than a tightly built Suzuki.

Inside, the familiar Optra settings have been made better by the use of faux aluminium accents and a sportier overall theme. Open the door, sit inside, run your fingers over the steering and dash, and the SRV feels robust and ready. In other words, it is not the silky and refined perception of the Honda City nor the oh-so-functional and clinical approach of the Swift that you get. Instead what you get is a car that you want to thrash from the word go. And yes, though I am not the most talented to comment on music systems, I can tell you that the SRV is the ideal car for you to chuck the rear seats and load it to the brim with sub-woofers. And when you play Led Zep loud, its panels won’t join the chorus with vibrations for sure.   Unfortunately, General Motors India has decided to launch the SRV only with the fuel efficient and refined 1.6 litre motor instead of the spunkier 1.8. But new injection mapping ensures that the 1598cc 16-valver develops a neat 100 bhp at 5800 rpm and 14 kgm of turning force at 4500 revs. The problem is this motor uses a rather down-to-earth five-speed manual box to transmit its power. To begin with, there is a great deal of gearbox whine that intrudes into the cabin (on occasions, it even sounds good!) and makes you think that you are about to drive a full-blooded Camaro rather than a Daewoo-derived Chevy.

But then, as I said before, the SRV is thrash-ready and dropping the clutch closer to the redline gets the car to sprint to 60 kph  in 5.13 seconds and to 100 kph in 12.05 seconds. Not exactly the numbers that would trouble someone who is used to the old Honda City VTEC, but the story has just begun. The car feels absolutely surefooted through the gears and you really want to exploit that motor for whatever it is worth without unduly worrying about valves being sent through the bonnet. Given the space, our test SRV managed 160 kph easily and the car felt safe while at it. Relatively short gearing, while good for fuel economy, is not exactly rewarding for the driver. But manage to engage third as quickly as possible and you will be biting the fleshier part of the power band and loving it.

The ride on offer is nothing short of brilliant for a car of its class (move over Palio, we have a really grown-up hatch that rides better) and handling is neutral till you start pushing the performance envelope. It understeers like most front-wheel drivers ought to, but extremely good hands will be able to get the SRV to carry three digit speeds around reducing radius corners with ease. But I can tell you that it is even more fun to push the SRV into tight corners at lower speeds with a bit of help from the handbrake for induced oversteer behaviour – I managed a neat 180-degree number without any effort, but with more tuition, one can get to go tail-wagging.

Heck, why am I talking about silly stunts with a car that has a fully grown sister in the Optra? Because, dear reader, with the SRV, you can. And more than that, you would ‘want’ to when your SRV is painted a tantalising Subaru rally blue.

The Chevy SRV is not for those who want maximum car for their money, nor is it, as we found out, the quickest car you can buy. But for approximately Rs 8 lakh on-road, you get a car with a certain degree of character and one that is surprisingly fun to drive. We also found out that, despite all the antics, the SRV returned 11-12 kpl on a regular basis – which is phenomenal for a car that is on the heavy side. And then, it is more practical than the proper three-box sedans to live with – at least inside our congested towns.
The SRV is a car that has doors that ‘thunk’ shut while other cars today ‘click’ shut. In the SRV you ride through potholes while you drive around them in other modern cars. With the SRV you may wake up one fine morning with the intent of going for a long drive with your music for your company while with other modern cars, you commute. It is traditionally individualistic than stand-out-modern-chic. If only we got cars like the SRV some ten years back.