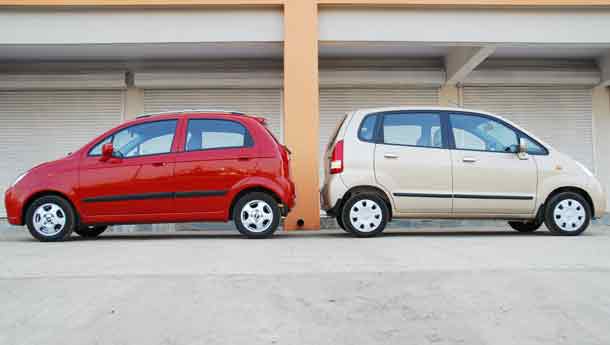 I absolutely abhor remixes, most of them add absolutely no value to the original song. So when General Motors got their hands on one of the best small cars on the planet when they acquired Daewoo and decided to relaunch it, I was a bit worried. You see, the Matiz was a great example of money well spent by the profligate chairman of Daewoo (I swear it was someone called Kim). It was a brilliantly engineered product, well put together and looked cute without trying. Now, GM-DAT could have made a mess of things when they remixed the Matiz and relaunched it as the Spark. So ladies and gentlemen, I am happy to say that the Spark is actually an improvement over the original. One, more cubes and an extra cylinder means it doesn’t run out of breath. Two, a new gearbox means the Matiz’s weakest aspect of being painful to shift has been given the heave ho. Three, it is still quite funky to look at. And four, even the ride and handling – which was quite good in the Matiz – is also better sorted. The General claims that barely 10 per cent of the Matiz is left in the Spark. But do all these make it better than the other, er, cute (for some, at least) hatchback from the Maruti Suzuki stable? Read on.

The Zen Estilo has a few things going for it. It has a drivetrain that’s proven –hundreds of thousands of Wagon R customers cannot be wrong. And Maruti’s parts engineering means it has little bits here and there that have done sterling duty in other cars wearing the Suzuki badge. And Suzuki’s mastery in making tiny hatches which are roomy on the inside is also seen in the Estilo. But is it good enough to beat the new car from Chevrolet? Let’s put them to the test.

The Spark’s 995cc four-cylinder motor produces 62.13 bhp at 5400 rpm, while it develops 9.02 kgm of turning force at 4200 rpm. Compare this to the Estilo’s 1061cc inline-four, which puts out 64 bhp at 6200 revs and 8.56 kgm at 3500 rpm. The Estilo motor is high-strung and revs freely like that of a motorcycle thanks to that four-valve per cylinder layout, while the Spark’s engine feels much more European in nature it’s calm and collected. But in our 0 to 60 kph and 0 to 100 kph timings, the Spark is anything but that, by easily beating the Estilo in being quick. That extra kgm and less kilos work in its favour. But there’s more to the Spark than meets the eye.

For one, it’s faster too. It was actually surprising to see the Spark’s speedo go well above the 140 kph mark and still go strong – it was an eye-opener. And the best part is that even while speeding at 150 kph and more, never did it feel dicey. It stayed well planted, as if cruising at three-digit speeds is something that it does every day – not something you’ll expect in a car with such diminutive dimensions. Not just that. Even when we conducted our 0 to 100 kph to 0 runs, the Spark came through as being well in control. Compare this to the Estilo, which runs out of breath beyond 140 kph quite easily. Just as well, because the Estilo feels a little out of its depth at those speeds.The car does not like to be pushed beyond a point, and is at its best only while doing those city commutes with short bursts of speed.

But that’s not to say the Spark is any less of an ideal city commuter. Both machines are in their element on tightly packed city roads, but the difference is that the Spark is much more relaxed and the gearing is spot-on, while in the Estilo, you end up having to be a little heavy on the throttle while spotting empty gaps in traffic. And the other important bit is that the Spark’s gearshift quality is way better than the Estilo’s vague lever – it’s so bad, sometimes that I had to fumble around to find out which gear I was in!

The real difference between both cars comes through when it comes to handling. The combination of the Estilo’s steering and suspension setup (comprising McPherson struts at front and trailing arm at rear) i  s not exactly confidence inspiring. It is way too vague in the way it handles corners – in fact, for a small car, it’s surprising how the rear end feels as if it is in its own trajectory compared to the front wheels. The steering also is a little too over-servoed, with the net effect that the Estilo feels toy-like rather than a real automobile. The Estilo can learn a thing or two on how to handle curves from its boxy twin, the Wagon R. That the Spark has spent quality time with Lotus shows in the way it behaves in corners. Its sparkling engine performance and the rest of its underpinnings (the suspension setup comprises McPherson struts at front and torsion beam axle at the rear) come through as a well-put together whole. It is well-planted and does as much a good job of corner-carving as a tallish small car will allow you to do. Even bad roads don’t upset the Spark’s poise. Again, the Estilo loses out when it comes to ride quality compared to the Spark. Though damping is decent, it does bounce around a little bit – overall, the car’s underbody setup is not as sorted as the Wagon R’s.So if you have read till here, you know exactly which is the better car of the two. Leave alone driving dynamics, the Spark is better built and more solid than the tinny Estilo. It is pretty cheerful on the inside too (a little too cheerful perhaps), and is pleasing to the eye as seen against the Suzuki. And surprisingly, that central display is not that difficult to get used to – it’s only sometimes in the night when you see none of the lights lit up behind the steering wheel that it is unnerving. Externally, the Spark has already won the battle. Most people’s opinion on the Estilo varies between both extremes, but with the Spark, it is just a matter of details and not the overall appearance and proportions. The little Chevy could do with a few improvements: it does not have a tachometer even in the top-end LT version, the angle of the front seats slopes downwards and don’t offer adequate thigh support, and if the steering can be allowed to give slightly more feedback at lower speeds, it would be just perfect. Otherwise, there’s nothing much to crib about, it’s a winner all right.

The difference between these two machines, which have a virtually identical footprint (check out their length and width!) is that the Spark feels bigger than it actually is, while the Estilo has no shame in saying that it’s a small car. This, despite the fact that the rear seats of the Suzuki are more accommodative to three passengers. As we are keying this, GM India has yet to announce the price of the Spark and its range of variants, but the ball park figure is estimated to be Rs 3.5 lakh, and it will have a three-year warranty as well – a first for a small car in India. So even if I assume that the Spark will be priced slightly more than the Estilo, it is worth it? It is a benchmark small car, just like the Matiz was, once upon a time. Funny, I never thought I would say something complimentary about a remix compared to the original, but this time, I am willing to make an exception.