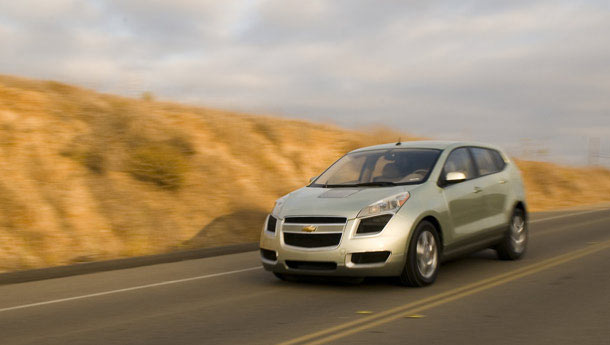 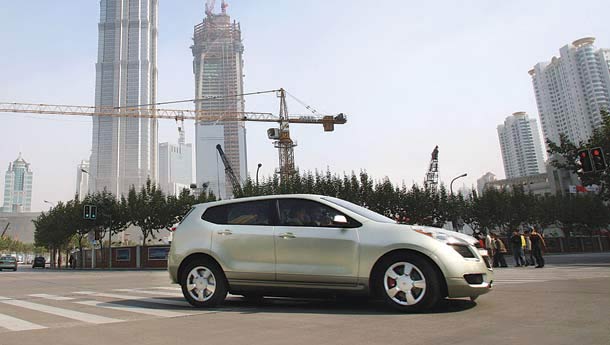 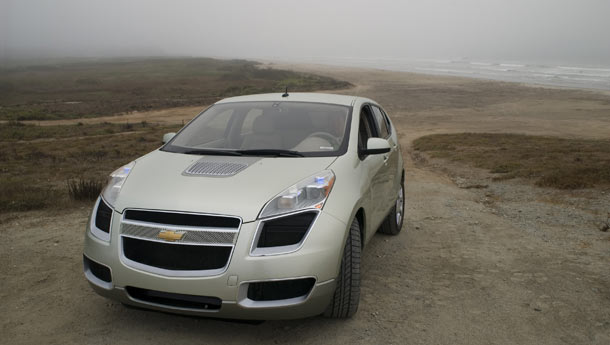 Bright, prosperous  future beckons — China Daily, November 6, 2006
That was the headline of an English newspaper on my first full day in Shanghai. No, it had nothing to do with General Motors being the number one carmaker in the ever-growing Chinese car market and it had nothing to do with the Chevrolet Sequel, GM’s hydrogen fuel cell car that I would soon be driving, along with many other journalists, and of course, the mayor of Shanghai. Actually, the headline lauded the just-concluded Beijing summit of the China-Africa cooperation forum and it was just one of the many wonderful things the newspaper painted about China on that particular day.

Shanghai can stun you if it is your first visit to  Panda-land. I knew for sure that our large neighbour had arrived in life thanks to stories told to me by those who visited it. But I had visions of a city larger than Mumbai with its share of concrete structures and some wide open roads. And for some strange reason I thought there would be lots of people wearing conical hats and cycling their way around. Needless to say, I was stunned the moment the Airbus A310-300 touched down at Pudong international airport. Exceptionally well laid-out roads, massive buildings that formed an imposing skyline, huge traffic jams made up of shiny new cars and a population that seemed bent on scrubbing the place clean was my first impression of China and it is going to last for ever. I was mildly disappointed to note that the conical hats were missing and most cycles had electric power assistance. Motorcycles are banned in Shanghai — but you have a special lane for small electric scooters and cycles.

Industrial corridor plays  pivotal role in rejuvenation — China Daily, November 6, 2006
That was the screamer of a headline announcing the Heilongjiang Week Opening that said lots of rosy things about the North East Chinese province. But I had a very busy day attending some important functions including a special meeting with Rick Wagoner, chairman and CEO of GM. Sure, GM has its share of problems to deal with back home in the US, but the fact remains that the huge investments made by the American company have started paying off in the Chinese auto market. Last year, GM and its joint venture partners together overtook Volkswagen to become the largest carmaker in China. Creditable, since VW was the first automaker to start assembly line production in the country way back in 1983. The Chinese auto market is already almost half that of the American market and it is growing at more than 30 per cent per annum. No wonder then that Wagoner wanted the attention of the global media to focus on the strides GM is taking in the fastest growing market in the world. Add to that the icing called Chevrolet Sequel, arguably the most expensive and technologically advanced car on planet earth today, and you get a nice tech-party.   Children to benefit from partnership — China Daily, November 6, 2006
The Chinese have built something called the Auto City. Essentially a huge suburb of Shanghai meant for automotive activities that includes exhibition centres, an F1 track and some massive showrooms. Of course, apart from the annual F1 circus and a museum that is almost  ready, nothing is officially open. The Chinese have perfected this art it seems — for example, they built the roads first and the cars are now following, in large numbers. I couldn’t help but spare a thought for a certain Hitler who did the same thing. Guess he got slightly more ambitious than populating his roads with cars.

The thorough executives of GM had taken over the huge exhibition hall and had organised a tour of the museum for us. Housed in a magnificent modern building, the museum had a variety of cars, from the “curved dash” Oldsmobile and Ford Model T to extravagant Ferrari Testarossas and some very special Rolls-Royces with unique body styles. Actually it housed cars from all parts of the automotive world, except Japan. Not a single car from Japan? Strange, but true. ‘The Chinese like to remember and pay respect to the contributions made by car firms that helped form the automotive history of China,’ said the GM executive who was giving us a guided tour since he was the only one around who could speak English. Things are changing on the road though and I spotted Honda Accords in police colours and huge hoardings for the newest Toyota Camry. So it is a good thing GM has taken the lead early on in China — the Japanese who rule the US streets today are not too far behind.

Tourism to get a boost — China Daily, November 6, 2006
Ten years back, Chinese civilian airspace had 250 aircraft. Today, the figure is over 1,000. So travel is booming and the Chinese are inventing events and discovering new destinations other than the Great Wall to take people to – like the Beijing Olympics in 2008. While Beijing is getting a makeover, Shanghai is struggling to cope with the huge development that it has seen in recent decades. To begin with, they have an issue with fog and the local party representatives are ready to do anything to clear it. Come 2008, GM will start rolling out a hybrid vehicle from a Chinese car plant. And if the city of Shanghai cooperates, GM will ensure that the next generation of traffic jams (since the numbers are not going to come down) will constitute hydrogen-fed fuel-cell vehicles. Like the Sequel.

A bit of history before we get on with the drive. Four years back, Wagoner realised that sooner or later the automobile will need to be reinvented. As in, cars of the future will not rely on hydrocarbon reserves and therefore will not use internal-combustion engines. Clearly electricity was the way to go and it had to be generated in the car itself. He challenged his technical team headed by Dr Larry Burns to do just that — reinvent the automobile. What in all probability he didn’t say (and was too obvious to Dr Burns and his team) is that it presented an opportunity to do it  before the others did it. Come to think of it, there are bio-fuel cars already running, ditto hybrids and whoever decides the DNA of the automobile of the future may get to dominate the automotive world in the near future too. As we all know, Honda, Toyota, BMW, DaimlerChrysler all have their very own fuel cell programmes running. In short the message to Burns was that ‘the race is on’.Burns (ironical name indeed, for a man plotting the doom of the IC engine) and his 200-strong team set out to work and came up first with a skateboard chassis, then the Hy-wire running prototype, followed by the Autonomy concept and now, the Sequel. And the Sequel, as the name suggests, is the second coming of cars as we know them. Apart from the fact that it has four wheels and a steering column, the Sequel has more to do with spacecraft than cars. I should know, since I actually drove a million dollar example (one of only two that exist in the world) around a carefully charted out track. So what if I had a computer wielding pro in the back seat who could make it drive like a golf cart if he sensed any intention from my side to crash it and thereby make a genuine Chapter 11 case for GM.   The Sequel uses hydrogen fuel to generate water and in the process creates enough electricity to charge a lithium-ion battery pack. It has got motors fitted to the wheels that power it and it is not slow. Actually it will do the 100 kph run in 10 seconds flat, which is brilliant for an SUV that a Hummer will be proud to adopt as its kin. And it can do 300 miles before asking for more hydrogen. On the move, the Sequel drove like a sorted-out car rather than a prototype made with lots of aluminium and plastic. Though it had a rather traditional looking steering, I was controlling the car through electronic impulses and braking similarly. Yes, now I will believe someone if they tell me that mechanical links are passé, since it all seems to work very well in the Sequel. As soon as you floor the throttle, all the available torque comes into play — like an electric locomotive, and hence the phenomenal acceleration. The drive was brief, but it was a genuine peek into the future. Sure it didn’t have the throb of an American V8, but as a GM engineer told us, that can be created using a set of nice speakers. Just like digital cameras that produce a fake “click” noise just to satisfy you.

Huggers arrested — China Daily, November 6, 2006
Just when I was becoming a big fan of China came the wake-up call — with a thud. You cannot hug someone in public? Imagine someone telling that to the people of Ludhiana. Apparently hugging in public is not encouraged and those who protested peacefully against the ban (of course, by hugging) were taken to a police station and remanded for a while (and left with a warning). But then that might change, like the rest of China and especially Shanghai. Change, as they say, is the only constant. And GM understands it better than ever before. For fuel cell cars to become the norm, the big cities of the world and whole countries need to cooperate and build an hydrogen infrastructure. They will need to fend off rich oil companies whose interests will be questioned. The Sequel is just a curtain-raiser in the quest for the brighter tomorrow that we all hope for. Most Shanghaians would agree with me, I guess.

I didn’t read the newspapers the next day, but I can give you the headline: Hybrids in 2008, fuel-cell cars to follow in the next decade — China Daily November 7, 2006.