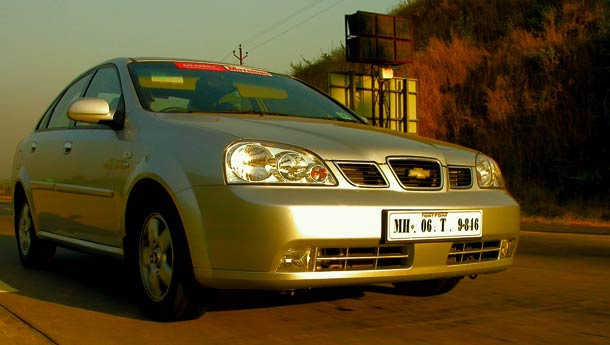 I have been using personal computers for about a decade now. Some eight years ago, I used to own a Pentium 100, with 32 megs of memory and a 1.2GB hard drive. Now, I run an Athlon XP 2400+ with 512MB of RAM and an 80GB hard drive. In automotive terms, this would be the equivalent of upgrading from a Maruti Zen to a Porsche Carrera GT. And yet, come to think about it, I used to get more or less the same things done with my old PC as I do with the new one.

Sure, the XP 2400+ is about a zillion times faster than the old P100, but more often than not, it only gets used for logging on to the Internet, writing emails and other documents, and messing around a bit with images shot on a digital camera. Sometimes, I think it’s just one big conspiracy, hatched to make us keep maxing our credit cards and keep PC manufacturers minting money. We end up buying bazookas when all we need, perhaps, is a shotgun. Which is where the new Chevrolet Optra 1.6 comes in – it gives you just enough.

The C and C+ segments in India saw a fair amount of action this year. The C segment got new contenders like the Tata Indigo (petrol and diesel), Fiat Palio Adventure 1.9D, and the new Honda City. And though they haven’t been launched yet, a Mitsubishi Lancer 1.8 and Fiat Siena diesel (probably to be badged ‘Maestro’) are lurking around in the very near future. In the C+ segment, the Toyota Corolla and Chevrolet Optra 1.8 were launched early on, and now an Optra 1.6 has joined the battle.

If that wasn’t enough, there have been numerous price corrections and revisions across the board in almost all segments and various kinds of package deals are being struck by manufacturers and dealers alike. The car market in India still has a long way to go before it can be called mature (by Western standards of course), but we are at least steadily on our way.

So, why a 1.6 Optra? Why not stick with the 1.8, which is already doing fairly well. Well, it comes down to simple math. With the Optra 1.6, General Motors hopes to take advantage of the blurring line between high-end C segment and base model C+ segment cars. While the bigger Chevrolet, the Optra 1.8, goes head-to-head against cars like the Corolla and the Skoda Octavia, the smaller-engined Optra 1.6 is pitted directly against the new Honda City, which is its most likely competitor.

With the new City, Honda decided to field refinement, sophistication and cabin space in place of the previous version’s power and FTD (fun-to-drive) factors. And GM realise they stand a chance of making a killing here. Compared with the City, the Optra 1.6 is significantly bigger (dimensions are, of course, the same as the 1.8’s), has much more cabin space, feels plusher, is considerably more powerful, and also competes very well on price. Ex-showroom Mumbai, the base model Optra 1.6 costs Rs 7.61 lakh. While the absolute base model City goes for about Rs 7.03 lakh, the model comparable to the Optra 1.6 costs Rs 7.47 lakh. For top end models too, the difference in price is not much – the City is pegged at Rs 8.07 lakh, while the Optra 1.6 stands at Rs 8.24 lakh. A full road test will confirm things, but on the face of it, the Optra 1.6 seems to be in a good position to win the battle of the spec sheets.

But let’s take a break from spec sheets, numbers and math, and get down to the car itself. Initially, I approached the 1.6 with some trepidation – the baby Optra’s 1599cc engine boasts of all the right bits (E-Tec, DOHC, 16-valve, MPFi, 32-bit ECM...), but its 103 horsepower is 12 down on the 1.8’s number. Now, I wouldn’t call the Optra 1.8 sluggish, but it isn’t exactly bursting with verve either, so the idea of a smaller-engined Optra didn’t seem extremely appealing to me. Then again, the Honda City makes do with all of 77 horses, so how bad could the Optra 1.6 be? As it turned out, not bad at all. In fact, the 1.6 has no driveability issues whatsoever – it can hold its own in traffic or on the highway, and is as happy chugging along at 50 kph as it is at 140.

If you are a devoted City VTEC fiend, you won’t find happiness here, but others shouldn’t be disappointed. Though this was not a full-on test, we pitted the Optra 1.6 against our trusty stopwatch anyway, and the car didn’t do too badly at all. 0 to 60 kph comes up in 5.1 seconds (4.31 sec for the Optra 1.8, 5.5 sec for the City), which is not so bad. Wait for our full road test for the complete picture, but I do think the Optra 1.6 will acquit itself with grace when the moment comes.

More than engine performance, the Optra’s main strength is cabin space and ride comfort, and like the 1.8, the 1.6 does very well at that. Sitting in this car feels good – the cabin is nice and plush (though I don’t particularly care for some of the ‘elephant hide’ textured plastic used on the dash), and most controls are laid out in a logical and ergonomic manner. On our test car, there was no chrome-plated plastic to be seen anywhere, and cloth trim used was fairly basic, but there were still smatterings of wood-effect plastic, and nothing seemed offensive. Styling continues as before, with only missing 1.8 badges to distinguish this car from its bigger-engined sibling. Everything on the car seems to belong there, in a nice, wholesome, value-for-money family-saloon which the Optra 1.6 is. Gripes? None, really. The gearshift isn’t as supremely smooth as the Honda City’s, and the brakes (ventilated discs at front, drums at back) felt a tad soggy, but maybe I’m just nit-picking.

Again, final verdict on these aspects will have to wait... Adequate power, generous amounts of cabin and boot space, nice fit and finish and fair price – undeniably, the Optra 1.6 seems to be a sensible deal. GM are also throwing in a two-year or 40,000 km (whichever is earlier) warranty, and for two years or 20,000 km (whichever is earlier) owners won’t have to pay anything for scheduled service expenses, which include consumables and labour.

Yes, GM seem to have a potential best-seller on their hands,and the car is well worth a look.And now, let’s see if I can make that 512MB of RAM on my PC work for a living...