The upcoming Trailblazer is now showcased on the Chevrolet India’s website. The SUV is bound to launch this month on 21st of October. The vehicle's arch rival will be the top-seller Toyota Fortuner along with Mitsubishi Pajero Sport and the upcoming new Ford Endeavour (https://www.cardekho.com/india-car-news/endeavour-now-featured-on-ford-india-website-16388.htm). The Trailblazer is said to be a CBU import and will be available solely with a single variant, expect the ex-showroom price to be around 29 lacs.

Also Read: Chevrolet Trailblazer To be Launched on October 21

The highlight of it is the 2.8-liter Duramax diesel motor with class leading figures. The 2.8-liter 4-cylinder oil burner pumps out 200 PS @ 3600 rpm and segment-best 500 Nm of twist at 2000 rpm. As of now, it will be only available in 4x2 layout mated to a 6-speed automatic transmission. Moreover, Trailblazer will also debut Chevrolet’s MyLink touchscreen infotainment system in the country, the unit on it is a 7-inch one. The infotainment system offers satellite navigation, reverse parking camera with sensors along with a host of connectivity options. 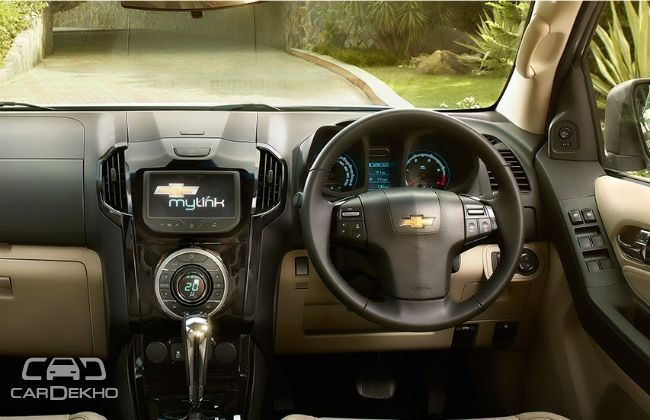 In terms of safety, it will be offered with dual-front airbags, electronic stability control, traction control and ABS+EBD. It is expected that Chevrolet will offer 4x4 version along with manual transmission variants on later stages.