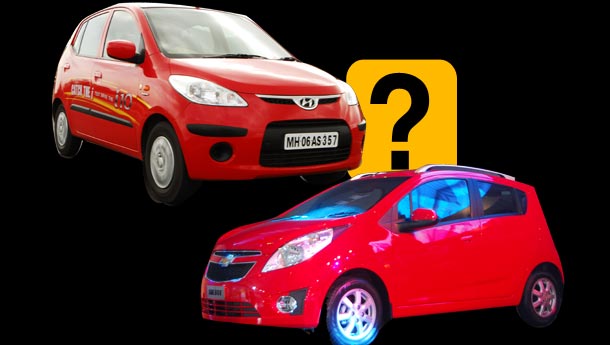 There are two ways of looking at this comparison. One is based on engines, and the other on price. If you purely consider the 1.2 variants of both cars, then the competition is pretty stiff. Both the engines are rev happy and seem to sing as the revs go up. The Chevrolet Beat has a slight rough edge to it while the Hyundai i10 only gets more throaty. In the performance stakes, the i10 seems to have the edge, getting to 100 kph nearly two seconds quicker (12.92 secs vs 14.89). Even passing speeds are better for the i10, which in turn is also better than the Suzuki Ritz. The only place the Beat makes a comeback is in the fuel efficiency stakes, but the difference is only marginal.

If price is the consideration, the Beat seems to be better value. The 1.2 versions of the i10 are not competition then - it is the 1.1 version that seems to have to deal with the Beat. The 1.1 feels a bit lethargic on the highway but has a nice torque spread for the city. It also feels more refined than the Beat and is also more efficient. But the Beat has other things up its sleeve.

For one, the Beat has its love-it or hate-it looks, but from what we gather most seem to like it. It's more new-age on the inside too, especially with that centre console and instrument cluster, though Hyundai have the edge in terms of build quality. Overall interior space and ride quality see the Beat increase its lead, with the Beat also the most settled out of the two on well paved stretches of road. Both cars are great fun to throw around, though we think the i10 is just a bit more fun than the Beat.

So it brings us to the big question - has the Beat beaten the i10? On the price front, yes it has. The performance and build quality don't bring it on the same page, but on other counts it has the measure of the i10. At the end, the Beat comes across as great package at a fantastic price. And that, somehow nudges it ahead of the i10.