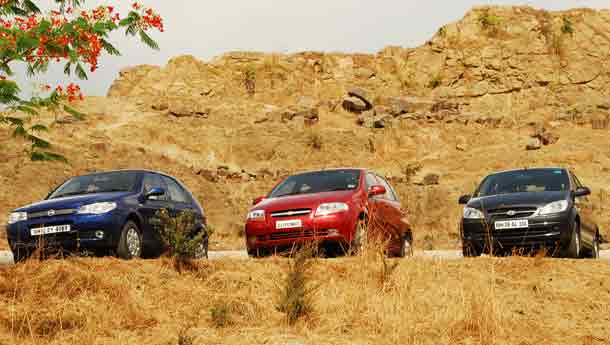 I wonder if small turbocharged Japanese cars were in our finance minister's mind when he gave his budget speech last year... you know, machines like the turbocharged Wagon R, which has been quite a hit in the Japanese drift scene. These cars gained from cuts in duties from the Japanese government, provided they did not exceed certain dimensions and their engines were not bigger than 660cc. But the sheer beauty of the thing is that the Japanese government didn't exactly specify the maximum output. Before you could say domo arrigato gosaimasu, you got puny machines that got boosted power outputs which could run rings around bigger, more powerful cars.

Similarly, when P Chidambaram famously reduced the excise duty down to 16 per cent on cars not longer than 4,000 mm and engine capacities not exceeding 1200cc for petrol cars and 1500cc for diesels, I had visions of hot, turbocharged small cars and the beginning of drifting madness in India.

No such luck, however. Between now and that fateful last day of February 2006, several small cars have made inroads into our market, and none of them the kind of machines I dreamt of – the Maruti Suzuki Swift diesel, Maruti Suzuki Zen Estilo, Chevrolet Spark, Tata Indica Xeta 1.2 and the three cars that you see on these pages. And more are on their way!

But for the moment, we have lined up these three for an evaluation. The Chevrolet Aveo U-VA has an all-new engine, created to fit in comfortably within the stipulations. Similarly, Hyundai re-worked the Santro Xing engine to produce three more horses and 1.3 kgm of additional torque in the Getz Prime 1.1, while Fiat dug into their vast small engine line-up and plonked the 1108cc FIRE engine into the Palio Stile's bay. But is the idea of a B-segment engine in a B+ hatch going to work wonders? To put things into perspective, we put the cars through BSM's comprehensive Performance Evaluation Track test, where we started off using a 200 metre long strip, changing the car on the redline before braking hard to a complete stop, completing a U-turn and driving through a set of six cones, and finally going through a 360 degree skid-pad maneouvre and back to the start-finish point. Oh, not just that, we even drove them in Mumbai's traffic jams and on highways to tell you, what we think, is the best large hatch commuter amongst these three. Let the games commence!

Tres
The Fiat Palio 1.2 missed the 1200cc mark by 42cc, so Fiat opted for an existing engine to help out in the interim, before the Linea and the Grande Punto mark the Italian firm’s big push. The 1108cc FIRE engine might have served Fiat well in its developing market onslaught, but with only 56 bhp at its disposal, the Palio now feels like one hand has been tied behind its back. It is the most frugal of the trio and even has decent low-end torque, but the Palio's power-to-weight ratio and tall gearing brought it down on the PET track. Recording a time of 01.00.29 seconds, the Palio Stile lacked the urgency that has come to be expected not only in this segment, but with a car that wears the proud Fiat badge as well. With peak power arriving at 5250 rpm and the redline a further 1850 rpm away, the Palio lost a lot of time on the straights. Unlike the old Honda City VTEC, the high redline doesn’t translate into improved numbers and maybe Fiat could do something to cut the rev-limiter earlier to allow the car to stay in the power band.

Around the cones, the Palio’s high-profile tyres spoilt the chassis’ inherent balance that once made it a joy to drive. There was considerable dive, roll and pitch too, but if handling compromises can make way for excellent ride quality, then the Palio might seem like an enticing alternative. Still built like it were from a single rock, the Palio rides over road irregularities like they didn’t exist in the first place. Nary a squeak from any panel, the Palio might be a few years older than its competition, but the A178 platform still sets ride and tautness benchmarks. Wish the same were also for interior trim. While it is livelier than the drab black Palio NV, the over-use of different textures and colours don’t make it very eye-pleasing. Neither does the finish, with edges that could have been better rounded off.

Features and price-wise, the Palio Stile 1.1 has a lot to offer. But as a complete product that defines it as a spacious commuter, it falls short of its more modern competitors. We hope Fiat doesn’t make similar compromises with the Linea or the Grande Punto when they hit our roads early next year.

Dos
The danger of being the first entrant in a segment is that if you fail to get it right, others will nullify the advantage by learning from your mistakes. That is exactly what the Swift did and forced Hyundai to change tack. Now, Hyundai has introduced the Getz Prime 1.1 and let me say, this one ran the U-VA close. Very close. It looks the best among the trio given its Euro chic design, has the best interiors of the lot and has a short throw gearbox that feels as good as the one on the Embera, if not better. It even has the tried-and-tested 1.1-litre Santro Xing engine that never feels out of breath nor does it see a southward dip in fuel efficiency figures. Add Hyundai's wide service backup that is renowned for its near-consistent quality and you might just stop reading any further and let your right brain direct you straight to a Hyundai showroom.

However, it's here you should stop any attempt to tie your shoe laces and read further instead. Acceleration figures aren't the best here. Around the PET track, it didn't feel slow on the straights, though the gearing is a bit short once you commit to mid and high revs. But enter the cones and the car needed to be yanked to change lanes. It has nothing to do with the steering at all. While all this was going on, there was considerable roll for company too, the high profile tyres probably adding salt to the party. Still, its PET timing of 00.58.05 is not bad considering it's the heaviest of the lot here, and has a power-to-weight ratio disadvantage. However, around town, it's fairly peppy – but do remember, it feels and is slower than a comparable B-segment hatch. If you can live with these flaws and count on Hyundai's peace of mind factor, this is where the buck stops for you.

Un
We didn't give the U-VA our Car Of The Year award for nothing and in this battle of the 1.1s, the U-VA has come at the head of the class. But only just. Try to look at this car as a complete product and it has all bases covered. The engine is so refined that we won't hesitate to say that it is one of the smoothest small cars in the market today. Try working through the gears and you would be hard pressed to believe that the gearbox is a GM product. Though it's a bit vague and the throws are long, it still slots into place with a nice snick. The U-VA's peppy too and our long-termer, which now has a new ECM due to a small recall, has resulted in a growling engine note. Through the PET course, the Aveo recorded the fastest time of 00.55.34 secs, nearly 2.8 seconds faster than the Getz and a full five seconds over the Palio. On the straights the near-perfect gearing allowed for fairly good momentum to be built. Around cones, there was understeer as my breakfast splashed around in the small intestine and a small hint of body roll too, but nothing too disconcerting. The performance is 'energetic' as Josh puts it, good enough to scythe through the hustle and bustle of city traffic, yet is rapid enough for highway stints.

Where the U-VA loses out is on fuel efficiency and interiors. While the centre console has a nice black rubber lining and the power window shrouds have a neat faux carbon fibre look, the grey slab on the rest of the dashboard makes it feel cheap, even though the controls and knobs have a nice feel to it. Neither does the grey seat trim reduce drabness, a far cry from the rather rich interiors of its larger sedan sibling. While fuel efficiency is marginally lower than the Getz, the near 600 km driving range still is decent when driven with a sensible head. Factor the 3-year/100,000-km warranty and GM's improving service quality and network and we don't think you will go wrong with it.

However, I am still wistful about a hot, turbocharged hatch to go drifting in.