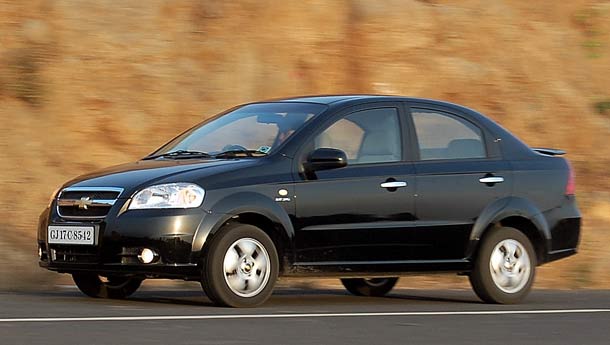 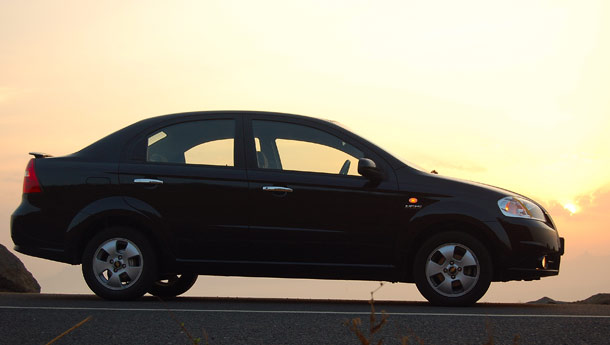 Relief. That’s what you look forward to after a long day at the office, don’t you? It isn’t easy being a management type, is it? It can be pretty tiring working late into the night to come up with buzzwords to confuse your colleagues with. After which all you want to do is unwind by doing something stimulating. Mind you, I am not referring to any of the activities that are advertised with the use of a red light or a phone line. There are alternative environments to relieve oneself you know, and one of them is called an executive saloon. And the Chevrolet Aveo here is the latest of the lot.

Now, General Motors has been going through a lean patch over the past few years. In fact, the best thing that has happened to them in the recent past is the Daewoo acquisition. Five years ago, if you told someone that the Korean will hugely help to keep the General alive, they would have dismissed you as someone who fought the war on the winning side. Sometimes fact is stranger than fiction. Even we, as a country, have really taken a liking to the Koreans er… I mean the Chevys, and one does get to see
a lot of new bow-tied Optras around.

As far as executive saloons go, we already have a lot of those too. And enough variants to fill up our ‘Which Car?’ mailbox for months on end. From sedans that are old enough to vote in the form of the Maruti Esteem to the new-age Honda City VTEC at the top-end of the scale, choosing a car can be as confusing as finding out the parabolic equation for the circumference of the earth. Told you it was confusing. Does the Aveo’s launch help matters then?

Take a look
No two ways about this, the Aveo looks good. Sure, it isn’t flamboyant, but what it successfully does is make your neighbour’s Esteem look staid while impressing your secretary. Front-on, if you ignore the proud and large bowtie, the Aveo does look rather run-of-the-mill, but things improve drastically from there on. I love the slightly bulged fenders while the twin taillamps are rather neat too. In fact there is a certain amount of big car feel in its proportions and it does look more special than let’s say, the Fiesta, something that’s further enhanced by the chrome bits all around in this LT trim. The fact that it resembles an Optra at a glance helps its cause on the image front as well.   If the outsides impressed you, opening the Aveo’s rather heavy door will help keep things that way. Words like luxurious and premium which executives like to use pretty often fit the Aveo rather well. But if you’ve had more than your share of, ahem, corporate lunches, this car might be a little too small for you. Meanwhile, extensive pulling and prodding reveals that the build quality is first rate while tapping around reveals that the quality of plastics isn’t. But it isn’t something that’s apparent to the eye, so we’ll leave it at that. And apart from the curved dash intruding into limbs of taller testers, it’s all good ergonomically as well.
Styling & Build quality: ****

Run of the mill
Unless you aren’t already aware, the Aveo does come with two engine options. And the one here is the bigger 1599cc petrol unit. The engine per se is rather similar to the Optra - the Ecotec series with VGIS puts out 102 bhp@5800 rpm while torque is rated at 14.98 kgm@3500 rpm. Not exactly ‘Brilliant!’, as you would say in your boardroom meetings. But it is enough for the car to get from nothing to 60 kph in 5.3 secs and on to a top speed of 175 kph.

What you don’t feel though is the sudden step of accelerative energy. Nor will you be struck by the engine’s refinement. It’s a busy blaring thing, quite hard edged actually, as the revs rise. Unless you are in a real hurry to get somewhere, this is one motor you wouldn’t want to push too hard. The other thing is that its smaller sibling, the 1.4, does the same jig in 5.57 secs and tops out at 170 kph. A difference that isn’t life changing. The point I am trying to make here is that the 1.4 is actually all what you would really need.
Performance: ***

Feedback
The Aveo gets an independent McPherson suspension at the front and a semi-independent torsion beam setup at the rear. Now here’s a car that was never built to have fun in. However, the likes of the Fiesta have taught me that everyday sedans can be involving. Sadly, the Aveo doesn’t follow that line of path. What it does follow though is the rather straightforward task of going into a corner and coming out of it. Push it harder and the tyres start to squeal, but apart from that it is predictable front-wheel drive stuff all through.

As far as ride is concerned, the Aveo isn’t spectacular in this respect either. In fact it isn’t even close to being spectacular and it is the one thing that conflicts with the big car feel that it offers. While it does ride well on good roads, surfaces that resemble lunar surfaces will shake you up, especially if you are in the rear seat.
Ride & Handling: **

Status report
Let’s face it. This isn’t a car you would want to have to shout your arrival at the middle rung of the corporate ladder. But if you want everyone to think you’ve arrived, the Aveo does make sense. It looks special - well, at least a lot more than the others in its class - and is well put together too. On the other hand driver involvement isn’t high, so it’s better off with a chauffeur doing the honours!

So then, does this Aveo make any sense at all? Of course it does, but not as much as its 1.4 variant. The 1.4 looks equally good, is equally fast and consumes less fuel too. Okay, so it doesn’t have ABS or the other goodies, but it is much more value for money. And somehow that would make a good executive decision.