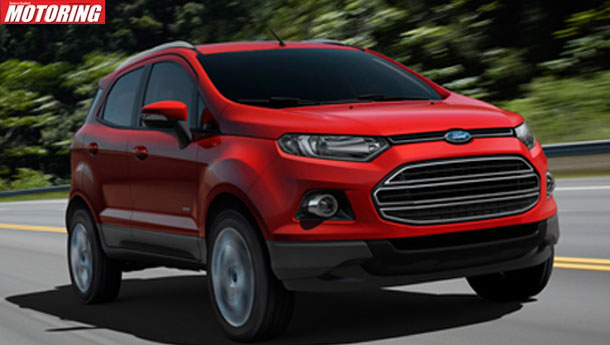 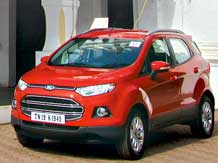 Ford had promised to launch a compact SUV that would change the face of the automobile market. Now, after a year, the EcoSport happily basks in the fact that it has retained more than 90 per cent of the looks sported by the concept vehicle showcased at the Auto Expo in New Delhi in 2012. Since Ford's announcement, we have seen Renault and Mahindra hurry to cash in on this new segment of low-priced compact SUVs. While the Duster was a runaway success, the Quanto came and disappeared without a whimper. The EcoSport, to hit the dealerships in June, needed time to enable localisation of its parts so that the sale invoice did not scare buyers. Also, Ford's new vehicle comes with contemporary features, quite unlike the Duster and Quanto, which essentially were re-wrapped packages of tested models.

Pleasing to the eye
Keep in mind that all three - EcoSport, Duster and Quanto - are made to tackle the urban jungle, and are not meant for dune buggying or marshland adventures.

The EcoSport is a sub-4 metre vehicle that revels in being refreshing. The imposing, high-mounted front hexagonal grille delights the senses, crafted not just to please the eye but to improve the vehicle's aerodynamics as well. From the rear, the Ford looks like the Mercedes-Benz M-Class because of the similar wrapped-around windshield. The spare-wheel mount on the tailgate adds to its rugged looks. An impressive 200 mm ground clearance allows the EcoSport to sail through potholes and over speed breakers.

If you want your vehicle to have a traditional SUV look, then it is the Duster. Its front chrome grille and the flared wheel arches give it a muscular image. The Renault has a shade better ground clearance at 205mm too and is just over the 4-metre mark, 4.3 mm to be precise. It has bash plates under the front and rear bumpers as well as roof rails. Mahindra's Quanto, on its part, is a traditional multi-utility vehicle, the compressed version of the Xylo. This sub 4-metre vehicle's boxy looks might not enchant the beholder but its USP is space. Mahindra has tried to infuse some off-roading looks with the spare wheel placed on the tailgate.

Personal space
The EcoSport will look familiar from the inside with the Fiesta's space-age protruding dashboard. Ford is known for solidly-built interiors but with the EcoSport, you have to admit these are average. The cost-cutting is evident in the visible panel gaps. But, contrary to popular belief, the EcoSport feels spacious. The front seats are easily the best in the segment as they are supportive and snug, even if they lack thigh support (a problem if on a long drive). I asked a 6-feet-tall person weighing around 115 kg to sit in the driver's seat and adjust it according to his comfort. When I sat in the rear seat, I measured an impressive two-finger distance between the front seat and my knees. But for utmost comfort, it would be best for two to sit behind the driver. The reclinable rear seats split 60:40, thus increasing the boot space.

In contrast, the Duster's interior build-quality feels below par. But yes, it has loads of space both in front and rear. Its superior width space ensures that three passengers can comfortably park themselves in the rear seats. The front bucket seats will give you no reasons to complain but they are slightly low in height. The Duster's luggage space of 475 litres can expand to 1,064 litres when the rear seats are folded down.

The Quanto uses the same 2769mm wheelbase of the Xylo, which ensures that it has a spacious cabin. As it is a seven-seater, the middle room feels like acres of space but the seats are too upright for comfort.

Loaded with goodies
The EcoSport comes in four variants - 1.5-litre diesel, 1.5-litre petrol which also comes in six-speed dual-clutch automatic gearbox and the 1-litre EcoBoost petrol (the one we drove in Goa was fitted with the EcoBoost engine). Debunking beliefs that SUVs are powered by diesel-guzzling engines, the EcoSport is propelled by a compact petrol engine that churns out a healthy 123 BHP power. Turn on the ignition, and the silent 3-cylinder heart barely hums, something which we hadn't expected. Step on the pedal and the EcoSport cheerfully accelerates amid city traffic. The 5-speed gear complements the engine with its precise gear ratio. As long as you're in the city, the vehicle doesn't lack power.

However, when you get on the highway or in the hills, the vehicle starts to huff and puff. The power lag is so evident that overtaking is only possible in third gear. If you want to step on the gas you need to wait for the needle to cross 1500 rpm. Well, Ford has always claimed that the EcoSport is an urban SUV and meant for city driving, but this does disappoint.

The "Pull Drift Compensation" technology adapts the steering wheel to changing road conditions and prevents the driver from causing the car to drift. The suspensions allow you to take the corners with ease without compromising on the ride quality. The EcoSport comes with voice command technology called SYNC, powered by Microsoft, which lets you make calls, choose music and manage the system's features. The EcoSport is the first vehicle in the segment which comes with an all-India 108 Emergency Services. Through SYNC, the computer sends voice SOS messages to 108 operators if the airbags are deployed or the fuel pump is shut off.

The fuel question
The vehicle we drove had the petrol EcoBoost engine, which according to ARAI, returns a mileage of an amazing 18.9 kmpl. The diesel Duster and Quanto run 20.4 km and 17.2 km on a litre of fuel, respectively. With the difference between petrol and diesel rates reducing every month, the Ford SUV asks a realistic question: Is it still worth paying Rs 1-2 lakh more for a diesel SUV?

Verdict
Admittedly, the Duster and Quanto lose out to the EcoSport when it comes to the gizmos and safety features. The Ford vehicle is far more appealing in its looks too. But the Duster is formidable competition as it comes with a fuel-efficient 1.5 litre diesel engine with two options - 85 bhp and 110 bhp. Of the three, the Duster is also the most spacious. The Quanto is a utilitarian vehicle and comes with space, comfort and basic safety features but in terms of driving experience it disappoints. The EcoSport has adequate space for four adults, has a fuel-efficient engine, innovative features and is a driver's car. If space is not your main criteria, then go for the Ford. Else, the Duster is your car. From the experience with the Fiesta, Ford will probably price its new SUV competitively. We expect it to range from Rs 6.5 lakh to Rs 11 lakh.