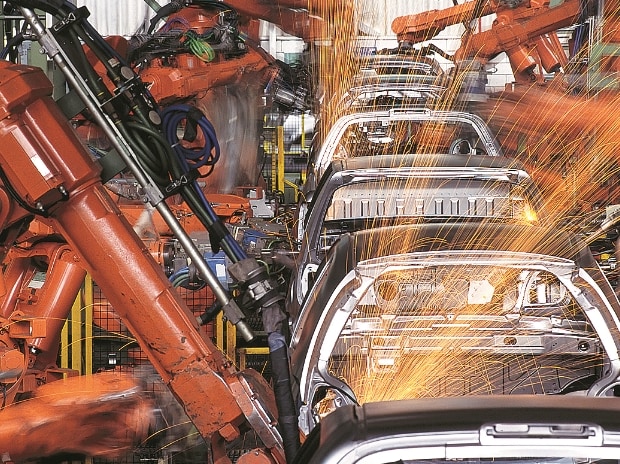 Ajay Kumar Jain, the chairman of the Rs 300 crore-auto component manufacturing company PPAP, opted to source 20 robots when it commenced operations at its Bhiwadi plant three years ago. That did away with the need to hire 60 additional workers.

“One robot can do three-crew shifts of eight hours daily without a break. The upfront investment of Rs 20 lakh for such a robot can be recovered in three-four years,” says Jain, who supplies car parts to companies, including Maruti Suzuki and Honda Cars. The life of a robot is at least 10 years and one can run them for months without a stop, he adds.

Jain’s company has 1,700 workers and might have needed additional 150 had he not decided to get 50 robots for his four units.

But cost is not the sole motivation behind automation. “If you want to reduce dependence on labour and eliminate variability in quality to serve the evolving needs of vehicle manufacturers, you will have to automate,” says Jain.

Automobile, a key manufacturing industry, is among the leading job creators in the economy. But the pace and nature of job creation is changing as manufacturing units of both component and vehicle makers move to automate. The newer plants that have come up in the last couple of years and those that are being set up will absorb less number of people than the older ones.

American carmaker Ford’s second Indian plant in Sanand, Gujarat (inaugurated in 2015), has more than 500 robots, most of which operate in the body shop area. By comparison, its first plant at Chennai has just about a 100 robots.

Car manufacturers say the number of jobs created in actual production process is significantly lower than the jobs created outside the plant in transportation, financing, insurance, sales, service, maintenance, petrol pumps, spare parts and workshops and driving of vehicles.

“Creation of jobs inside factories should not be seen in isolation. It is important to create cars that are affordable. A growing car population will continue to create jobs outside,” says R C Bhargava, chairman at Maruti Suzuki.

Bhargava says manufacturers are under pressure to enhance productivity and use lesser people to get more output. “A higher productivity will not lead to lower jobs if you look at it holistically. Look at the economy of Japan. It is highly automated and yet there is a shortage of manpower”.

At Maruti Suzuki, the country’s largest carmaker with a 47 per cent share, 2,000 jobs were added at the two manufacturing units last year (total count about 22,000) as it produced more number of cars. However, its dealerships (including Nexa) hired about 4,800 sales staff last year, taking the headcount to now 40,000. The service workshops of Maruti hired about 8,000 technicians last year and the total strength now stands at about 80,000.Sudhir Rao, chairman & managing director at Škoda Auto India, says the trend of automation is going to gain pace. “It gets more feasible when your scale and volumes go up, which is happening in India. Newer plants will create relatively fewer jobs but they will still employ substantial number of people,” says Rao.

Rao explains earlier a plant meant to produce 100,000 cars a year would typically employ 2,000-2,500 people. But the new automated plans may hire 10-15 per cent lower numbers. “I don’t see automation as a strong threat to employment, but it will be foolish to deny that it is not a threat at all,” says Rao. Indian companies produced a record 3.79 million passenger vehicles and also a record near 20 million two-wheelers in FY17. India is the largest two-wheeler market and fifth biggest car market globally.

Auto component maker Sona Group plans to automate and install robots on all forging presses by 2018. “We now have 17 robots on forging lines and we plan to install and use another 15 robots in next two years. We are shifting all machining lines with automated loading and unloading technology,” says Vikram Verma, executive director, Sona BLW Precision Forgings. The company will spend Rs 8 crore in further automation. In most cases, automation also creates certain jobs, as automated manufacturing needs a certain degree of manual supervision and therefore, a need for skilled operators.

A series of unrest and strikes in the automobile industry at small and big companies, rising wages year after year and the lack of skilled workforce are also being seen as triggers to rising automation. But entry of new multinational players like Kia Motors, SAIC and PSA among others will continue to create several thousands of jobs at the plants of vehicle makers and their component suppliers. However, their sales service network will lead to an addition in employment.

Next: Banking is the new IT for jobs