That apart, the company has posted its best annual profit for the year ended March 2017. There was a 16 per cent jump in net profit for the fourth quarter, to Rs 1,709 crore. The growth in the first, second and third quarters had been 23, 60 and 47 per cent, respectively. The FY17 profit surged 37 per cent to Rs 7,337 crore, with volume growth and a better product mix.

Sales revenue for the fourth quarter rose a little over 20 per cent to Rs 18,005 crore. Maruti sold 414,439 vehicles in the quarter, growing 15 per cent over the same period a year before. Revenue for the year grew 18 per cent to Rs 66,909 crore. Annual volume growth was 9.8 per cent, to 1.56 million units. The company paid royalty to Japanese parent Suzuki at 5.8 per cent of the revenue, against 5.7 per cent in FY16.

The stock price hit a new high of Rs 6,444 during intra-day trade at the BSE exchange and closed at Rs 6,371, marginally lower to Wednesday. The company, also procuring land for dealerships, said it had allocated Rs 4,500 crore for capital expenditure in FY18.

R C Bhargava, chairman, said FY17 was a 'challenging' year in some sense. "There has been a hit on account of adverse currency movement, which also resulted in commodity prices moving up beyond our expectations. However, the annual Ebitda (earnings before interest, taxes, depreciation and amortisation) has been maintained at 15.5 per cent (15.7 per cent in FY16)."

The Ebitda margin for Q4 came down significantly to 14.2 per cent, from 15.6 per cent in the comparable period of FY16. Ajay Seth, chief financial officer, said if commodity prices and forex rates do not fluctuate, it will be possible for the company to hold the margin at the same level in FY18. 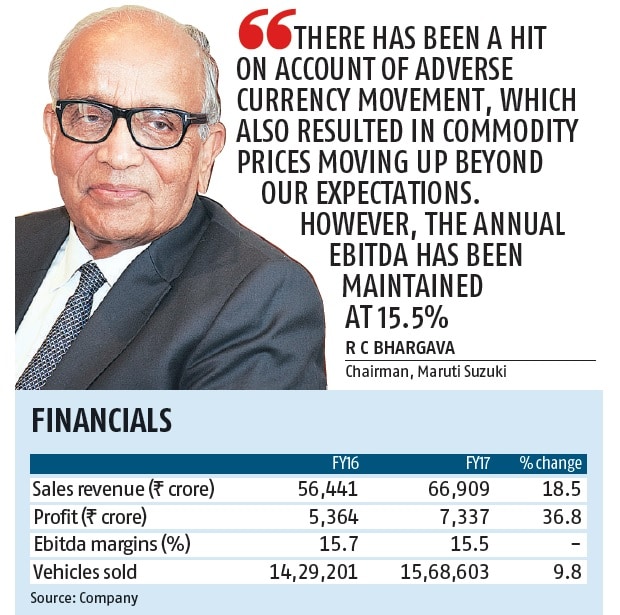