Demand issues in China continue to weigh on Tata Motors forcing the company to cut costs, curtail capital expenditure and improve its cash flow at its UK-based subsidiary Jaguar Land Rover. The company, which reported a consolidated loss of Rs 10 billion in the September quarter, seeks to improve its performance in the second half largely on the back of a turnaround plan for JLR with gains pegged at 2.5 billion pounds over the next 18 months. While a large part of it will come cut in capex (1 billion pounds), the street will focus on whether the company can improve volumes in the second half of the fiscal even as it seeks to improve operational efficiencies.

The first challenge for JLR will be to improve its show in the Chinese market, its most profitable and largest market in FY18. The geography, however, has slipped to the fourth position among its key markets with sales in Q2 down over 40 per cent year on year on account of import duty changes and escalating trade uncertainty. The volume woes for the company were compounded as other key markets of Europe and UK too are witnessing weak demand for diesel vehicles (account for over 85 per cent sales in the two markets), regulations and uncertainty on Brexit. The company, however, expects overall JLR volumes to improve in the second half on the back of seasonal uptick, new model launches and improvement in China volumes. 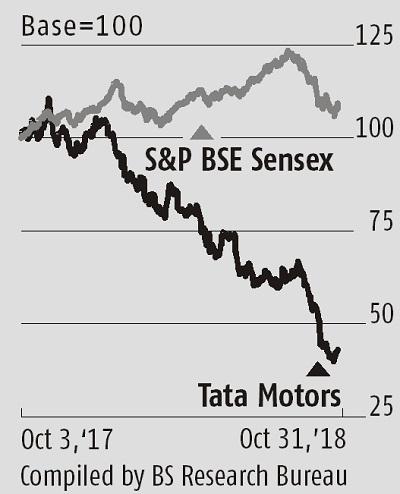 While JLR has indicated a turnaround in financial and volume performance, analysts believe it will be a tough task given that larger peers (BMW, Audi, Daimler) with a deeper franchise are struggling given the muted overall luxury auto sales. The positive in the quarter has been the 9.1 per cent operating profit margin at JLR which is better than expected. The street though will look for volume growth to back up the operational improvements.


As expected on the domestic front, the company on the back of robust sales in commercial and passenger vehicles posted a 33 per cent growth in revenues. This coupled with higher realisations and operating leverage helped improve its margins to 8.7 per cent. While this is positive, it was lower than analyst expectations. While the company has highlighted the need to improve its market share and profitability, the street will look at the margin graph improving to the double-digit mark.