The sedan segment in India has regaining the grounds and the year 2014 has been revolutionary for the segment. There have been launches in each and every segment and sub-segment of sedans, be it compact, mid-sized, D-Segment or premium sedans, all were well received. Some of the new ones in the category were sedans like Honda City, Hyundai Xcent, Maruti Suzuki Ciaz, Toyota Corolla Altis and Audi A3. The year 2015 will also see a range of new sedans, which will take the segment on a new level. So, let’s check out which will be the new contenders in the sedan segment in 2015. 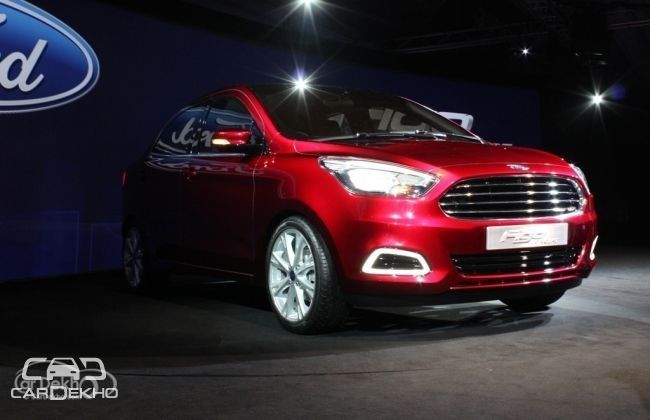 Well we'll be getting the new hatch and the compact sedan early next year which will be the first product from the company's upcoming plant in Sanand, Gujarat. In Brazil, the upcoming Ford-Figo-duo are known as KA (hatch) and KA+(sedan).

The sedan version is likely to share the diesel engine with the Fiesta which is the 1.5L TDCI producing 89bhp and 205Nm of torque. It will also be powered by a new 1.0L naturally aspirated petrol engine. The powertrain features latest double variable command on intake and exhaust i.e. the TiVCT technology. The motor belts out maximum power of 85bhp and a peak torque of 105Nm. This will make it the most powerful 1.0L naturally aspirated engine in India. We can expect high efficiency figures from this small engine. It will come with the Ford's SYNC connectivity co-developed with Microsoft, the one that is in Fiesta. The SYNC connects your smart-phone with the car's audio unit and with the Ford's smart-phone app – AppLink (available on IOS and Android). You can also control several features of your phone by command of your voice!

Ford’s debutante compact sedan will be battling it out with the likes of Maruti Swift Dzire, Honda Amaze, Hyundai Xcent and Tata Zest. Therefore, we are expecting a competitive pricing around Rs. 4.5-5 lacs. 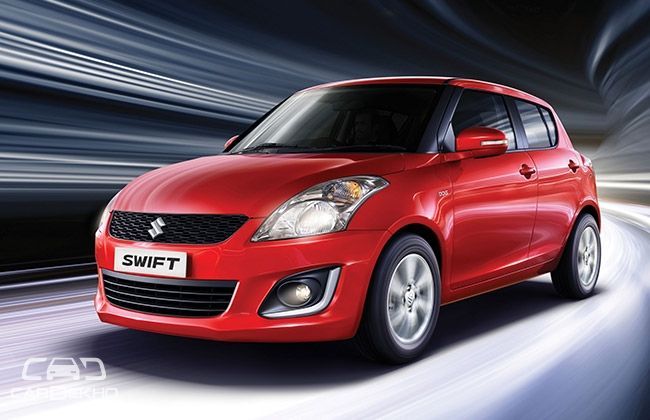 The Swift has recently got an update and it’s time for its sedan sibling to have the same treatment. Just like the hatch, we are expecting push start button, reverse parking assistant, new front profile, premium interiors and higher fuel efficiency as well. The same 1.3-litre DDiS diesel engine that churns max power of 74bhp and peak torque of 190Nm will power the sedan. The diesel model will  deliver a fuel economy of 25.2kmpl, which is 10 per cent more than the older version. The petrol model will also house the same 1.2-litre K-Series VVT engine that gives an output of 83.2bhp and max torque of 115Nm. The mileage of petrol model has been improved by 9.67 per cent. At the exteriors, the sedan will get a new distinctive bumper, stylish grille, bezel fog lamps and new trendy alloys. The base price will remain the same but the top-end variant will see a price hike due to inclusion of new features. 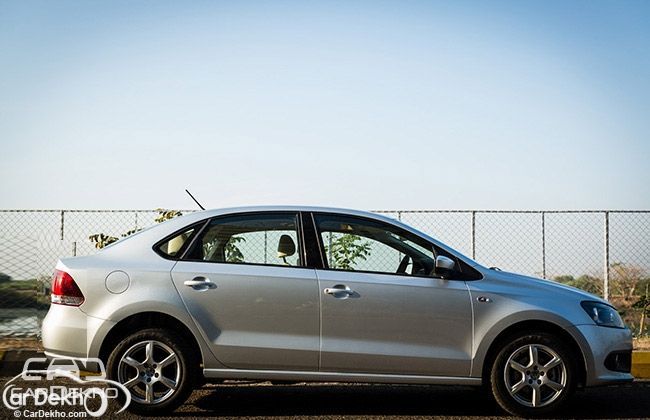 Reportedly, the German manufacturer Volkswagen is considering filling the gap between the Polo and Vento with a sub-4 meter sedan version of the Polo. Based on the same platform, the new compact sedan will have the same cabin space as the hatchback. There is no information on the design available yet, however, it will be a challenge for VW as it’s not going to be easy to tack on a boot on the 3,971mm long Polo. It is expected that the vehicle will be powered by Polo's powertrains to keep it competitive. Polo's 1.2 liter petrol gathers 73.9bhp and 110Nm of torque while the 1.2 liter diesel churns out 73.9bhp and 180Nm of torque. If VW offers this car with the 1.2 liter turbo petrol, which also powers the Polo GT, then this vehicle can certainly shake up the petrol arena if priced right. 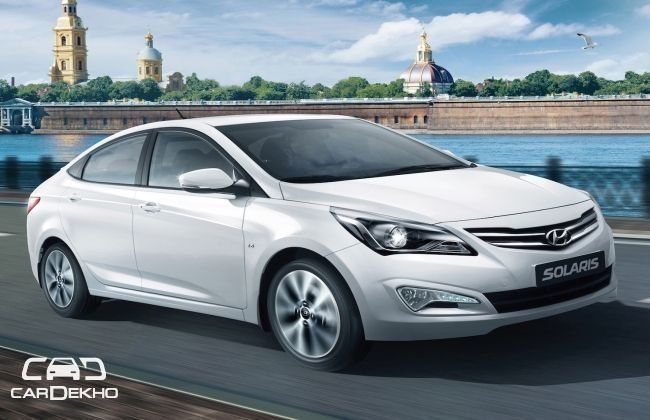 Hyundai India is prepping-up for the Verna facelift. The refreshed sedan is likely to launch early 2015. Verna received a serious blow from the new Honda City lately, which dethroned it from segment leader position while Maruti Suzuki Ciaz has added fuel to the fire. Moreover, the segment is also crowded with refreshed rivals. On the design front, Verna facelift gets a new face - featuring twin-slat chrome grille, new swept-back projector headlamps and the refreshed bumper. It is likely to be offered with fog lamps and daytime-running-LEDs just like the Solaris. The changes to the rear profile are limited compared to the front, it could feature LED taillamps like its Russian twin while bumper gets twin fogs. On the inside, Verna facelift offers elusive changes to the overall design, expect few additions to the already high list of features.

Mechanically, the refreshed Verna is borrowing the outgoing models engine lineup. So the engine on offer will be 1.4L/1.6L petrol and diesel. Speaking of the transmission, Hyundai India currently offers Verna with 5-Speed MT and 4-Speed AT while diesel is offered with 6-Speed MT and 4-Speed AT. Now like its Russian counterpart, a more efficient and modern 6-speed AT is likely to chip-in to replace the ancient 4-Speed AT, while manual is expected to remain unaltered both in petrol and diesel guise. Moreover, seeing the fuel efficiency war that’s going on in the segment, expect the new Verna to extract more per km! 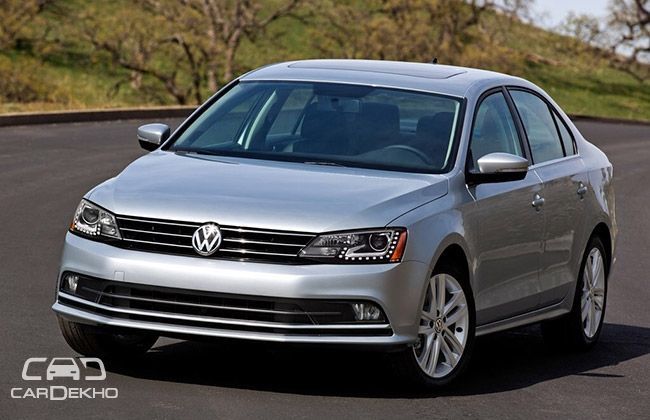 The Jetta was one of the first two launched vehicles in India by Volkswagen. The car has been a success for the brand, however, the new Skoda Octavia has given a dent to sales. To recover, VW is giving a revamp to the D-segment sedan. It will get a restyled front and rear with improved aerodynamic properties. At the front, the latest generation car can be recognized by its redesigned radiator grille with three cross fins, daytime running LEDs and a new bumper. Each daytime running light is formed by 15 LEDs arranged in an L-shaped string. The new visual band formed by the radiator grille and the headlights, as well as the now larger lower air inlet, give the Jetta a wider and more substantial look. Re-sculpted foglights mounted in the outer areas of the bumper reinforce this effect. The boot lid, taillights, rear logos and bumper of the Jetta have also been updated for 2015. The new bumper underneath it all completes the new rear look of the Jetta.

The 2015 Jetta will sport several optional new features based on trim: a new multifunction steering wheel; redesigned air vent controls; piano black accents on the center console and around the gear shift lever; new chrome accents around the dual-zone Climate control; ambient lighting; and new fabric colors and designs for the seats.

The engine is ideally to remain the same, however, we can expect a bump in power ratings to 150bhp on the 2.0-litre. Also, expect Volkswagen to introduce the 1.8-litre TSI but this won’t make a major difference to the sales, as their major chunk of sales comes from the 1.4-litre petrol and the 2.0-litre diesel. We can expect the new Jetta to be launched early next year, while the US market will get it sometime in the third quarter of 2014. 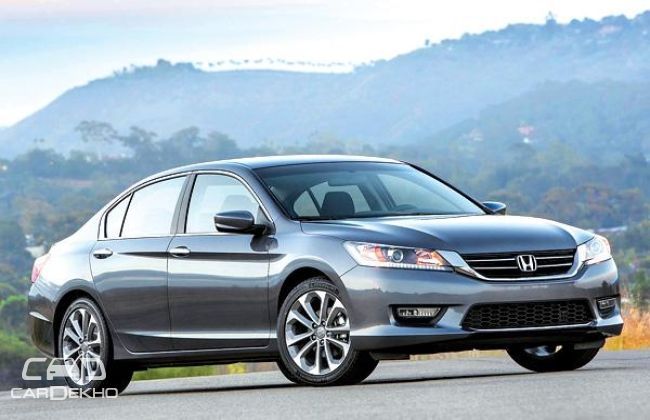 The Japanese Automaker Honda is known for its premium offerings and the Accord have always been its flagship product. The company discontinued Accord in India, however, we have learnt that the Accord will make a comeback in India in a new form in 2015. The new Accord will get mature styling, a more spacious cabin and more features than any Accord before. It will be offered with a 2.4-litre petrol engine with a choice of manual and CVT gearboxes. Sadly, there won’t be any high-performance V6 petrol version on offer this time but Honda is likely to introduce a hybrid variant. There will also be no diesel option, at least initially, but a 1.6 diesel motor could be introduced at a later stage.