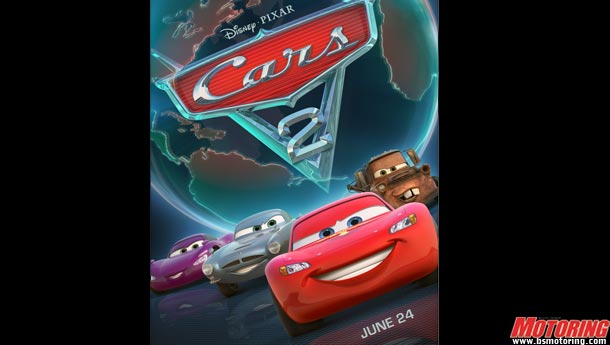 It might be an animated movie that children will enjoy, but it certainly isn’t a children’s film. This here is a movie that every automotive fan, and every racecar fan will thoroughly enjoy.

Finn McMissile. I’ve never been a big Michael Caine fan, but after watching the movie, I cannot think of a better actor to voice the sleek British secret intelligence agent. Perfect, is what it is.

Francesco Bernoulli - the Formula Racecar who is Lightning McQueen’s main rival at the World Grand Prix. He’s cocky, he’s got an inflated ego, and he’s funny as hell. Watch out for the scene with Francesco’s mother in it. The sheer attention to detail is superb. (Also, does Francesco, even though he is Italian, remind anyone else of Alain Prost? I think it’s the long nose cone that does it.)

Luigi and Guido. If Luigi scornfully telling Lightning that he followed ‘only the Ferrari’ was the line in Cars. This time his line is ‘Guido no believe you’. You have to hear the thick Italian accent in which it’s spoken to get the full impact. And do not miss the scene where Luigi and Guido tango with two pretty Fiats.

Them Lemons! They are mean, rusty, unhappy with the automotive slice of the pie that life has dealt them, and have some funny lines too. Imagine a bunch of disgruntled Pacers, Gremlins and Zundapps taking on the world. That’s exactly what happens here.

Cars sure knows how to make you choke up. There are a few rather emotional scenes. Doc Hudson is shown to have passed on already. And there’s the scene where the Brazilian racecar has a horrific crash on a long lefthander. Needless to say what it reminds one of.

The animation. Every little detail is thought out and executed so beautifully. For example, Luigi’s number-plate – it isn’t any random number. It is the exact co-ordinates of the Ferrari factory at Modena. How can you not love them for being so brilliant?

Mater. Well, he’s the actual star of the movie. And there are times when he might become a little too much to handle. But, how can you not like a rusty old tow truck that always means well?

Finally, there are plenty of sequences that feature aircraft in this film. A little teaser for Pixar’s upcoming flick – Planes?