Car manufacturers launched more than a dozen new vehicles in last five quarters in an effort to grow sales. But not everyone was able to get the pricing right. The result: price corrections to push sales and remain in the market. Pricing strategy and its execution is getting trickier for players as the market gets crowded with more products.

The first major pricing error came about a year ago from market leader Maruti Suzuki after it launched its first crossover, S Cross, in August last year. This was also one of the most expensive products from the company. But within a couple of months of the launch, there was a sizeable discount of up to Rs 90,000 on the S-Cross. Maruti Suzuki admits it went wrong on the pricing of the 1.6 litre variant. In January this year it slashed prices by Rs 2 lakh on an average.


R S Kalsi, executive director (marketing and sales) at Maruti Suzuki said sometimes customer does not perceive value at a particular price point. “In case of S Cross, the 1.6 litre variant had an imported power train and hence was expensive. But customers did not see a value in 1.6 litre variant (priced at a premium of Rs 3 lakh) vis a vis the 1.3 litre model. Today, pricing has to be market driven as the market is highly competitive,” he said.


American car maker Ford cut prices of its two products- Figo and Figo Aspire- by up to 7 per cent and 13 per cent last month. The steep cuts came within one year of their launches. "With the realignment of prices, Figo and Aspire are even more compelling for customers," said Anurag Mehrotra, executive director (Marketing, Sales and Service) at Ford India. The corrections came at a time when market leaders- Maruti Suzuki and Hyundai- announced price increases of up to Rs 20,000 on their vehicles.


Players are responding to changes in market scenario with price cuts. In March this year, the company had cut prices of its sports utility vehicle EcoSport by up to Rs 112,300, three days after Maruti Suzuki launched its first compact SUV, Brezza.


In July, French car maker Renault cut prices of its multi purpose vehicle Lodgy by almost Rs 1 lakh to compete with Maruti’s Ertiga. Rafael Treguer, vice-president (sales and marketing) at Renault said, “The MPV segment is on a decline. As a marketing strategy you need to correct prices sometime”. 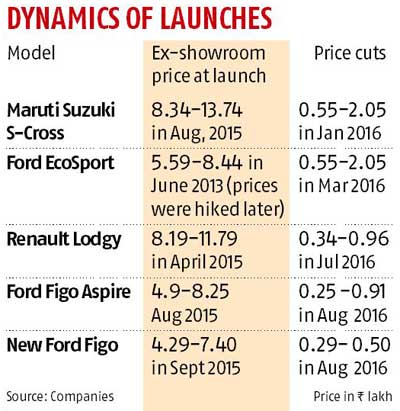 Not all such price cuts serve the purpose. Maruti Suzuki was able to support volumes of S Cross to some extent after the cuts. But Ford EcoSport’s volumes dropped from 4,454 units in March to 3,779 units in April and further to 3,043 units in May.

It is worrying that some of these companies taking such price cuts were already not making money in the Indian market. "Many products fail to clock volumes as the price does not justify the value proposition to the customers. Pricing of a car is strategic commercial decision targeting projected volumes over various stages of product life cycle. With changes in market scenario, many times the volume does not happen, creating an inward pressure to discount and alter the price value proposition. But such a step leads to reduced margins and affects the sustainability of the product,” said Rakesh Srivastava, senior vice-president (sales and marketing) at Hyundai.
Why players go wrong on pricing? “I think the problem stems from a short-termism," said B V R Subbu, former president of Hyundai Motor India, who now runs a strategy consulting company. "I may be entirely wrong, but it often appears to me that OEM executives are working with a ‘creaming’ strategy to try and show rosy performance numbers in pursuit of short term personal rather than long term corporate goals. It takes much more strategy effort to start with realistic sustainable pricing, and use that as the first lever to build long term market dominance.”