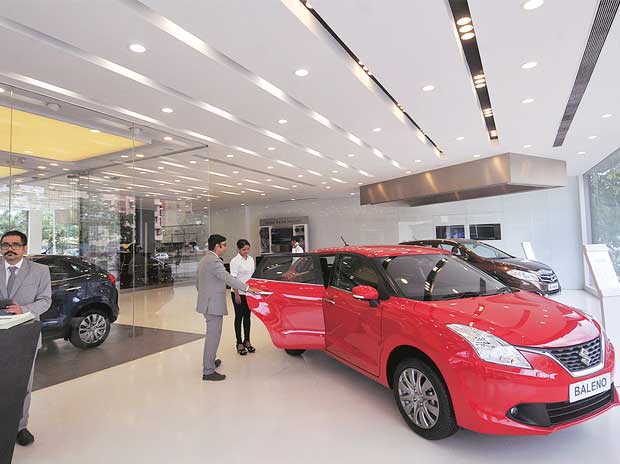 Carmakers recorded a speedy volume growth of 21 per cent (approximately) in September sales, thanks to the stock building exercise at dealerships ahead of the festive season. While the top three passenger vehicle (cars, utility vehicles and vans) players reported  growth, competitors didn’t come even halfway close to Maruti Suzuki, which clocked a 30 per cent sales growth.

The company, which enjoys a 47 per cent share in the Indian market, sold 137,277 vehicles last month against 106,083 units in the same period last year. The highest monthly volume for the company also implied that almost half of the industry’s sales came from Maruti last month.

While all segments of the company saw double-digit growth, the bulk of it came from utility vehicle segment, including Vitara Brezza, its latest model. The compact segment (Baleno, Swift and Dzire) and mini segment (Alto and WagonR) grew 12 and 25 per cent, respectively. Ciaz sales grew 52 per cent to 6,544 units.

“New products like Baleno, Brezza and Ciaz are doing well and we have emerged as segment leaders. October is going to be a month of bumper retail demand, thanks to festive season and we are ready for it,” said R S Kalsi, executive director (marketing and sales) at Maruti Suzuki.

Maruti’s domestic volume growth in H1 (April-September) stood at 12.1 per cent. The industry looks set to post a double-digit growth for full year after a gap of five years. Second biggest player, Hyundai did not announce its sales numbers on Saturday but is estimated to have grown about 5 per cent to 42,600 units. Utility vehicle major M&M, the third biggest player, grew 5 per cent to 20,537 units. Pravin Shah, president and chief executive (automotive), M&M said a good and near normal spread of monsoon as well as new launches have helped the auto industry perform positively. “We hope the upcoming festive season brings in better demand due to improved sentiments. We are happy to have achieved an 11 per cent growth during the H1,” he said.

Tata Motors has grown 24 per cent with the help of its new hatchback, Tiago. Toyota, which launched a new Innova Crysta in May this year and petrol variant of Innova in July, has grown sales by six per cent. Toyota’s growth also comes as it resumed sales of diesel Toyota and Fortuner in NCR after Supreme Court lifted the eight-month old ban on hi-end diesel vehicles on August 12. N Raja, director & senior vice president (sales & marketing) at Toyota said Crysta remains on waiting list even after five months of launch and is clocking monthly volume of 8,000 units.

Renault continued to see a strong three-digit growth on the back of its small car Kwid, launched in September last year. Its alliance partner, Nissan, is also estimated to have grown over 100 per cent with the help of its new vehicle Redi-GO. Volkswagen and Ford saw a growth of 22 and nine per cent, respectively. Honda and GM remained in the negative.

Amit Kaushik, managing director at consulting firm Urban Science said improved sentiments and festive demand will drive traffic to dealerships in October and set the pace for a double-digit growth in whole of the year.