The star segment for the country’s biggest carmaker has been the compact and utility vehicles. The compact segment with models like Baleno, Swift and Dzire grew 13% in the month and 28% during the year. Utility vehicle segment with models like Brezza grew 24% in the month and 29% for the year. Brezza has helped Maruti establish its leadership position in the domestic utility vehicle segment for the full year, overtaking M&M. The company’s mid-size sedan Ciaz saw a decline of 8% in the year due to launch of Hyundai’s new Verna and higher taxes on mild hybrid variants under GST.


It was one of the best years in recent times for Tata Motors’ passenger vehicle division. Tata Motors has established itself as the fourth biggest player overtaking Honda. The company closed the year with a growth of 22% to sell 187,321 vehicles in domestic market. March was a robust month when the company clocked a growth of 31% to sell 20,266 units. Its growth is helped by new models like Nexon and Tigor. Mayank Pareek, president of the company’s passenger vehicles business unit said Tata Motors is making good progress in the utility vehicle segment. “We look forward to sustaining this growth rate and continue this momentum in FY19.”


Players like Hyundai, M&M and Honda did not announce sales data on Sunday. However, the industry is expected to show a good growth in March on the back on performance of companies like Maruti Suzuki and Tata Motors.


Tata Motors’ commercial vehicles division clocked domestic sales of 49,174 units in March, an increase of 37% in annual terms. This growth was on the back of government’s push towards infrastructure development, restriction on overloading, road construction and mining activities along with increasing demand from e-commerce & FMCG applications, the company said. The cumulative sales of commercial vehicles for the year stood at 399,318 units, expanding 23% over the previous year. 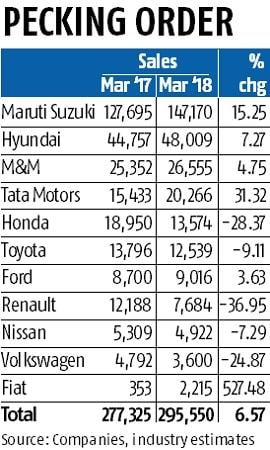