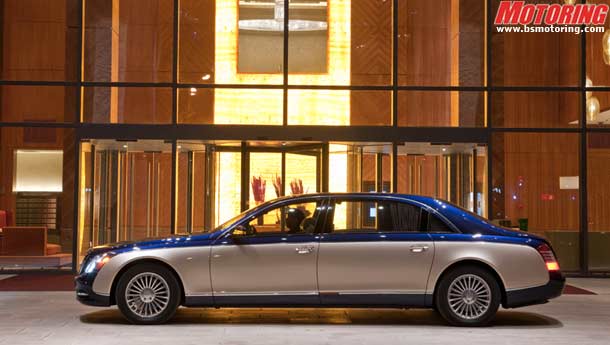 Mercedes-Benz recently unveiled two new variants of the Maybach — Maybach 57S and Maybach 62 — sporting price tags of Rs 4.85 crore and Rs 5.1 crore (ex-showroom Delhi) respectively. Though the German luxury brand has sold five units since launch in 2004-05, the automaker believes the time is right for a renewed push.

Even though the super luxury segment of the auto market continues to be small, the opportunity is immense. Says Vice-President (corporate affairs) General Motors, P Balendran, “The demand for luxury cars in India has clearly outstripped supply as many such brands have a waiting period of several months.”

And the target audience for such cars is growing at a steady clip. According to the 2010 Merrill Lynch-Capgemini World Wealth Report, the number of high net worth individuals (HNWI) in the country with minimum investable assets of $1 million or around Rs 5 crore touched 1.3 lakh by end 2009 compared to 84,000 in 2008. In fact, with a growth of 51 per cent in the HNWI population in 2009, India promises to be a key driver of growth of HNWI wealth in Asia-Pacific region.

Automakers also believe the target audience for the car will eventually go beyond the millionaires in the major metro cities. “There is potential in tier-2 cities in Punjab, Maharashtra and Gujarat where there is increasing affluence and new millionaires emerging,” avers Satya Bagla, managing director, Exclusive Motors, which sells the Bentley, Bugatti and Lamborghini brands in India.

Maybach’s global facelift incorporates changes in both internal styling and external façade. “We have made changes to body styling to make it look sporty and elegant. Also, the car is equipped with three televisions, as opposed to two in the previous variant,” says Suhas Kadlaskar, director (corporate affairs and HR), Mercedez-Benz India. The Maybach also offers a partition between the driver’s compartment and the rear compartment, which can be opaque or transparent depending on customer preference. “People seated in the rear seat have the option to talk to the driver via an internal phone, in case the partition is closed,” says Kadlaskar.

The car will be completely imported in India, and will not be showcased in any of the company showrooms to maintain exclusivity. “Prospective buyers can contact the parent company and we will send the car for a preview,” says Kadlaskar. The company will organise customer-focused events in cities like Jodhpur, where potential customers are invited to experience the car. “Owners of the high-end variants of the Mercedes feature in the guest list for such events,” adds Kadlaskar.

In the super-luxury segment, Maybach competes with the likes of Bentley, Bugatti, Porsche and Rolls Royce that record combined sales of a few hundred cars every year. PricewaterhouseCoopers India leader (automotive practice) Abdul Majeed believes the market will continue to be niche and Maybach will serve the role of “a brand image enhancer” rather than a profit maker for the company. “While the product will not see immediate volumes, it will help the company build momentum for the long haul.”

Majeed believes this move is in line with the long-term strategy of auto makers across the globe that are shifting focus from saturated Western markets to emerging markets and looking at them as growth hubs of the future. “Within emerging markets, India and China are priority and, therefore, the two markets where the new Maybach has been introduced,” says Kadlaskar.