Buying Kwid? Here's what you need to know

Details of the much-anticipated Renault’s Kwid have been revealed and they don’t disappoint. It is obvious that the car features SUV-like styling and so flaunts a high ground clearance. This is particularly handy when it comes to in city driving and tackling those pesky potholes and speedbumps. The SUV stance also helps the driver maintain greater visibility. 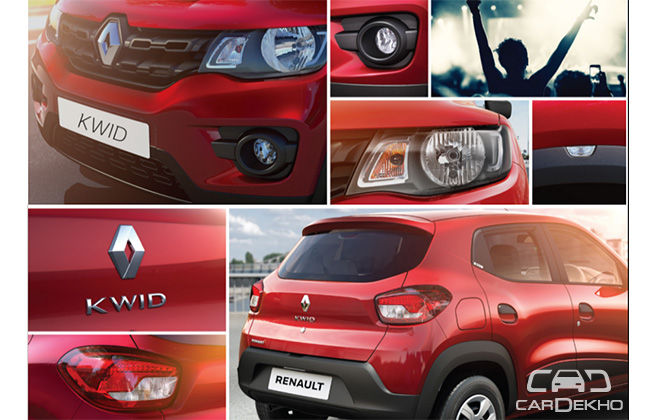 You can’t help but notice the C- shaped chrome signature lighting cluster in the front and the short boot overhang at the rear, which adds to Kwid’s strong, robust and striking appearance.

The elegant use of cladding flaunts the French design flair. The combination of Kwid’s sculpted muscular sides, minimalistically raked windscreen and the integrated roof spoiler helps the car maintain a sense of fluidity and movement. 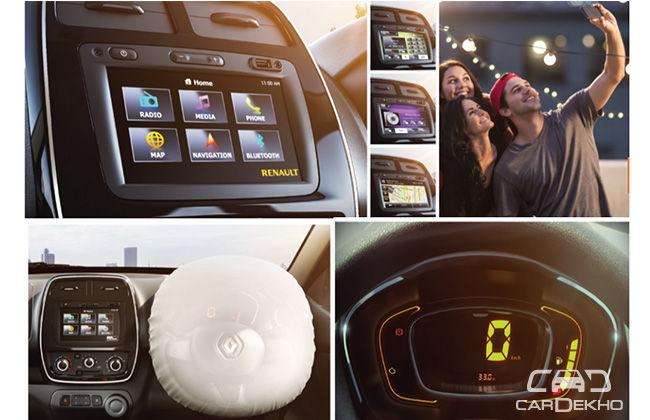 Renault Kwid features a very simple yet youthful style. The dashboard of the RXT variant features the segment-first touchscreen infotainment system and chrome accents can be observed sprinkled all over the instrument clusters. This seven-inch touchscreen display features MediaNAV that comes with a range of functions such as navigation with turn by turn voice guidance. The entertainment system of RXE optional and above variants facilitate various input features such as voice guidance, Bluetooth Audio Streaming & Hands-Free telephony, USB & AUX-input ports . The media system also features speed sensing volume controls. 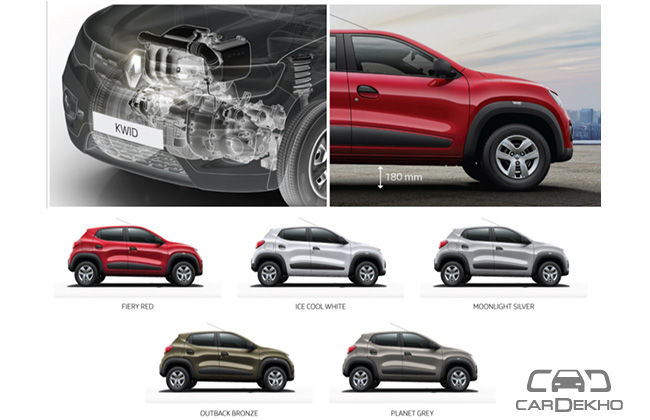 The RXL and RXT variant seats are draped in a grey, black and red sporty upholstery. RXL gets what Renault calls “Intense Red” and RXT gets what is known as the “Champion Red”. Renault’s “ergo smart cabin” bestows a feeling of sophistication and one can’t help but be impressed by the interior build quality. In addition, Kwid also comes with a 4-way adjustable driver seat that helps you find the ideal driving position. 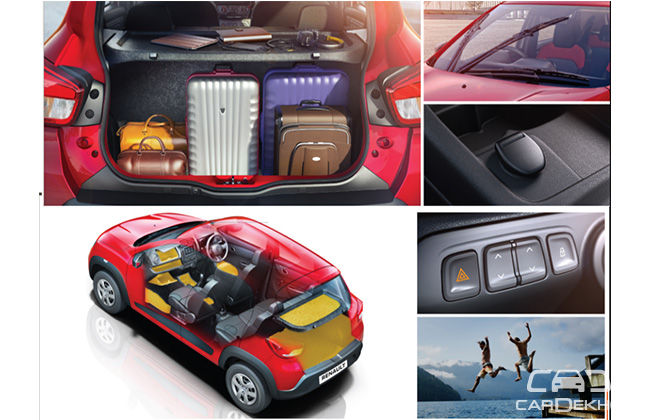 The Kwid features many nifty little storage spaces that include three sets of glove compartments. The car is an ideal choice for those long journeys, courtesy of it’s impressive 300-litre boot space that can be extended up to 1,115 litres. To make sure that you are always connected, Kwid has a very well concealed power socket.

Kwid is powered by a 799cc, 54 bhp 3-cylinder engine, which produces 72Nm of torque. The car offers an impressive 180mm of ground clearance. The driver’s bay gets an optional airbag, while the digital instrument cluster comes as standard for all variants but the trims vary. Other safety and security features include a central locking system, front disc brakes, high mount stop lamp and an audible parking brake warning.