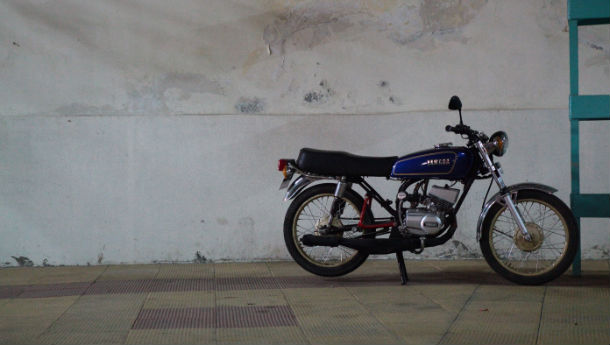 What exactly is a man supposed to do with a motorcycle? Riding it is an absolute must, and so is regular cleaning and maintenance. But what if you can't find the time to do it? Should one simply pass it on, for monetary gains or not, to a keen motorcyclist? And what if, like everything else you love, you've given it a name? What if, in a case of sheer misfortune, a tree falls on it and it's rendered utterly useless?

The hopeless romantic that I am, I have names for and emotional bonds with just about everything I own. Socks, digital point-and-shoot cameras, sofa cushions, bits of riding kit...and my motorcycles. The KTM is Arancia, the Bajaj Super is Azzurra, the good-for-nothing Eliminator, Adolf, and the Yamaha RX-G, Valentina. I never got around to naming the Karizma, a bike I never intended on parting with. And a few weeks earlier, it was sold. I had imaginative plans for that bike, but what happened instead was more rust, more rattles and just about nil usage thanks to the Hero Impulse long term test bike I acquired earlier this year.

I look at pictures of the bike often and am sure of the fact that its new owner is as thrilled about owning it as I was, back in 2010, when I acquired it, second-hand, off an enthusiastic college goer. It's a mildy depressing feeling, not owning it any more. And now, I have decided to part with one more. I love it to bits, but the last time I gave it the full-throttle treatment was about six months ago. Now, I simply start it once in a couple of weeks, or a month, something it plays along to. And there are bits on the bike that could do with cellotape and some screws.

Having decided, half-heartedly, to part with it, I set about writing a classified listing for it, so fourteen year olds with no money or educational prowess could contemplate buying it in between whatever it is that they do on the Internet. It was a typically well-detailed listing, with lots of enthusiastic exclamations and insightful bits of trivia on my personal history with it. But most important of all was the asking price. I knew the base price I had in mind, which is about half the current (bonkers) market value. And I was never going to extort money anyway. So I settled on a reasonably good price, fighting greed for as much as I could. Selected a clean set of photos (nothing too arty) to be uploaded and then, as I would have expected of myself, I failed to actually publish the ad. I felt terrible, cruel even. I remembered, instantly, the late night runs to the workshop when I was putting it together. I remebered feeling uncontrollably restless when I was about to ride it for the first time after the re-build. I knew it as a wheelie God. And now, for sheer lack of time and patience, I was going to let it go.

Two weeks of restless contemplation later, I still find it hard to digest that it must go. Holding on to it is a good option, for two decades later it will certainly be a bit rare. But, I have read and believed, a motorcycle is a motorcycle only if you go somewhere with it. Else, it's just furniture with an engine and plumbing. I've dropped the idea of a classified ad, though - it hurts too much. But friends have been kind in spreading the word, most considerately. It's Valentina, the Yamaha, who has to go. A stonker of a 135cc two-stroke motor, good bodywork, and awful tyres. If you want it...