Mahindra and Mahindra reported a muted performance in the March quarter, pegged back by declining volumes, lower realisations, and higher costs.

Falling volumes, especially in the tractor segment, as well as sluggish growth in the auto business and pressure on pricing, led to revenue growth coming in at under 5 per cent.

Margins were down 160 bps to 13.5 per cent, compared to the year-ago quarter, on account of higher product launch costs and lower realisations due to introductory prices.

The sharp increase in commodity cost, which, as a percentage of revenue, was up 200 bps year-on-year during a time of falling volumes, also impacted profitability of the company.

Despite the pressure on profitability, margins were ahead of Street estimates, which had pegged the same at around 12 per cent.

In fact, margins rose 32 bps on a sequential basis. The company was able to pass on rising costs to customers in the tractor segment, and improved efficiencies to counter the cost inflation. 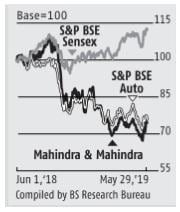 Given the pressure on volumes and expectation of a pick-up only in the second half of FY20, brokerages expect margins to be under pressure in coming quarters.


While costs related to new launches will be absent and the slight easing of commodity costs coming as a relief, pressure on realisations, coupled with lower tractor volume estimates, will impact margins. Tractors fetch better margins than the auto segment for the company.


While a timely monsoon is important for the tractor business, the firm is hoping for steps from the government to boost consumption, reduce GST rates, and ease the liquidity pressure.


However, as things stand, volume growth is unlikely to pick up till the second half of the year, with pre-buying — especially in the commercial vehicle segment — ahead of the implementation of the BS VI norms from April 1, 2020.


While the company is looking at protecting its market share of 41 per cent in the tractor segment at the end of the March quarter, for the passenger vehicle segment, the goal would be to increase it from 27.9 per cent on the back of three new launches.


Given the multiple challenges for the sector as well as margin pressures, investors should avoid auto names including M&M at these levels.