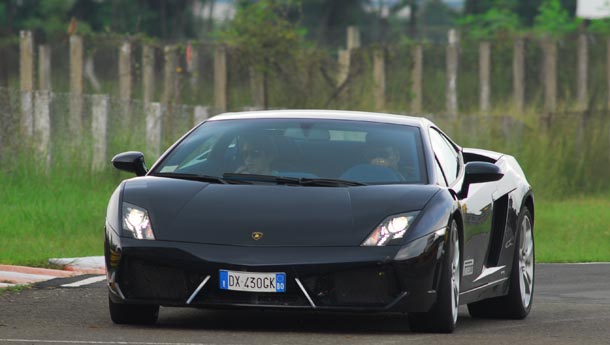 IN MY MIND
Could there be a better start to a week? Gladly took a very early morning flight to Chennai on Monday and headed straight to the Sriperumbudur track. The occasion? The Lamborghini track day! The Italians from Sant’Agata decided to run a “driving experience” programme in India for prospective buyers and, ahem, select media. Cars? Lamborghini Gallardo LP560-4s — two coupes and a spyder (convertible) all shod with Pirelli P Zero Corsa racing tyres. Sure enough, there were test drivers who controlled the proceedings while the braking markers were meant for drama-free apex-hunting. But none of that took anything off from the magic of driving Lamborghinis flat-out. The sound, that glorious engine note alone, is reason enough to drive one of these monsters. By the end of the day I was pushing the 560 horsepower mid-engined monsters in the sport-auto mode, which allowed me to concentrate on where I was going rather than wrestle with the car. All-wheel drive and those sticky Corsas meant the Lambos behaved — except when the instructors were not looking. Thank you, Lamborghini!

IN MY GARAGE
It is easy to dismiss anything that you drive after you start your week with Italian exotics. But the Skoda Laura that replaced the Skoda Superb in our long-term fleet demanded respect (let me remind you that Lamborghini and Skoda are cars from the same VW Group!). Sure, the performance from the diesel will not trouble anything with a bull on its nose, but the Laura has its strengths. There are two diesel-powered Lauras on sale — a 1.9-litre TDi and a 2.0 TDi (from the Superb rated at 140 bhp) with the excellent DSG gearbox. There is virtually no turbo-lag and this is one diesel that can be considered engaging to drive. But yes, I am already missing the tremendous room that the Superb offered.

CAR OF THE WEEK
A new Mercedes-Benz is in town — the E350 CDI. After offering the V6 petrol to those patiently waiting for the new E-Class, Mercedes-Benz India has unleashed the all-important diesel version — this time under the ‘Blue Efficiency’ banner. It may have efficient aerodynamics and low-resistance rubber that stretch the litre, but that does not mean there is not enough power. Floor the throttle and the 2987cc V6 summons all of 228 horses and 55 kgm of near-locomotive torque. The latest flavour for the Page 3 crowd? You bet.

BIKE OF THE WEEK
There I was, trying to figure my way into the innards of the Mumbai suburb of Ghatkopar. My lead came from a classified ad that offered a mint-condition Yamaha RD350 for sale. The RD was launched too early for its time through a joint venture between Yamaha and Escorts. Two-strokes were being banned across the world and the tooling came cheap and one of the first Indo-Jap JVs for motorcycles was born. Appalling fuel consumption killed the RD but performance seekers still swear by it. A decade back, BS Motoring launched the first ever RD350 club in India and ignited a chain of similar clubs across the country. All that took the price of the collectible-classic to the stratosphere. Fast forward to the bike in question — the seller wanted Rs 1,35,000 for a 25-year-old, near mint example. Sense prevailed; I ran.

QUESTION OF THE WEEK
What is the on-road price difference between a Skoda Laura 2.0 diesel and the Superb 1.8 Turbo petrol?

Less than Rs 2 lakh, at Rs 20.38 and 22.26 lakh on-road Mumbai respectively — which makes the Laura far too expensive rather than making the Superb far too cheap.