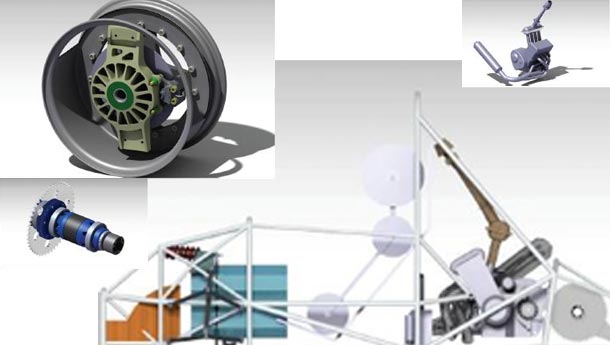 This is where all your work starts off. Start off from the very basics and move on to more difficult things as you go forward. When you've just started designing, it's very difficult to know what's the way ahead. But keep chipping away and things will become clearer. While designing a particular piece of equipment, it's very important to be able to visualise what exactly the component does in the larger scheme of things, how it is linked to other components and how a system works in tandem to accomplish a task. During this phase, read up as much as you can about your system, about engineering design.

Cars are complex machines, but like all things engineering, they ultimately boil down to playing with numbers and dimensions. There are software like CATIA, ANSYS, Solidworks available on the market today, which should simplify the designing process and make manufacturing easier. CATIA and Solidworks are Design softwares while ANSYS can be used for design as well as simulation. Look up FSAE Forums for questions that you might have. In all probability, they've already been answered there. Please note that the Forums are official in nature and use of slangs or demeaning language is not appreciated. In essence, your design phase is a make or break phase. If your design is well thought over, manufacturing and testing become easier and less error prone. Design light and it'll do you a lot of good when you get to driving the car. A few general design tips: Aim for a car that weighs around 200-250 kg. Mount the engine and associate components, the drivers seat, differential as low in the frame as possible to have a lower centre of gravity which aids handling.

One more thing that one should keep in mind while designing any component is whether it would be possible to manufacture it using the technology available at hand. There's no point designing something that can't be manufactured. Complex sweeping, curved profiles are difficult to manufacture unless you have access to technologies such as Rapid Prototyping or Dielectric Machining.

It helps at all stages of development to have a timeline in place, a schedule of sorts which one can follow. Allot at the very least, the first 2-3 weeks just for reading up on the basics of a system and eventually go into the details. While designing the intake system of the car, start from how the engine works (select an engine up first - a 600cc CBR RR engine is a good bet and available on eBay easily), going on to the role of the intake system, its various types, different parts that together make it up, and eventually the design of each individual part.

Also consider the fact that the intake and exhaust work in tandem to give the car its needed performance. The intake as such consists of the throttle body, plenum, runners, intake valves. If you're designing a car for FSAE, it also consists of  a 20 mm restrictor before the plenum. The 20 mm restrictor is the reason you cannot use the engine in its stock configuration. It changes the amount of air coming in which means you need to redesign everything around the engine and retune the engine itself.

Once you're done with the basic design of the intake, you might want to simulate the engines working with the given intake system. A company called Ricardo hands out student licenses to FSAE teams free of cost for development pupose. Ricardo's software can be used to simulate the working of the intake system. In order that the simulation gives you close to real world results, it's important to make sure your system is configured correctly ie. engine bore, stroke, intake geometry is properly defined. Once the system is ready, one can vary runner lengths, plenum sizes, intake diameters, restrictor angles, intake valve dimensions and various other engine parameters to study their effect on the engines power/torque output. Ricardo will infact go one step further and plot power and torque curves for you which can be later verified on a dynamometer. A 3D simulation of the air flow throw the intake can be done using a software called FLUENT. Through this software, it is possible to know the amount of air flowing through the plenum to each individual cylinder for the given intake geometry. Under ideal conditions, the air flowing to each cyclinder must be equal. The exhaust can be modeled in a similar way using CAD and simulation software.

I can frankly go on and on about the design of each individual subsystem, but I'll leave you with a few references which should help you out with the process. To know more about engine Design, refer to a book called Internal Combustion Engines by Richard Stone and then the one by John. B. Heywood. In order to know more about Chassis and Vehicle Dynamics, read up on Racing Suspension and Chassis Design by Carrol Smith. Also look up this book called 'How to build a Motorcycle-Engined Racing Car' published by Veloce. If you have doubts about anything at all during the design process, whether it's what books to refer to or making an important design decision, refer to FSAE forums on www.fsae.com.

Always remember, the devil is in the detail but it's important to get them right.