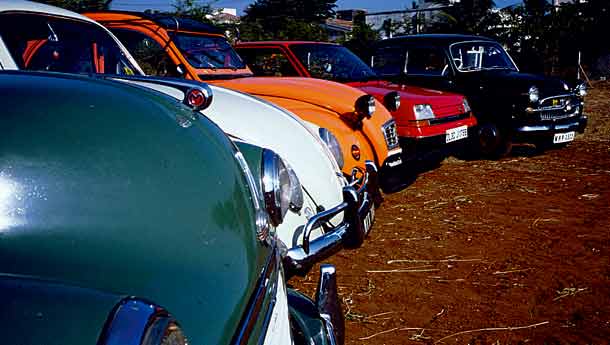 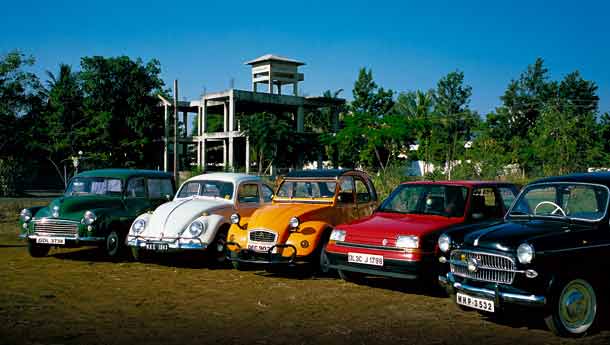 Cootchie-cootchie coo! Cheeky, cheeky, cheeky! Aagh, we can’t handle all this cuteness in one frame! Okay, maybe not that red Renault, even then we are down with a saccharine overload.The idea was to bring together five bug cars for our fifth anniversary special. Some of the cars were obvious, like the VW Beetle, the Morris Minor and the 2CV. As for the other two cars, we could have done with a Fiat 500 or a 600 instead of the 1100-103 E and an Austin/Rover Mini in place of the Renault 5. But what the hell, even then, a line-up of these five machines is no less beautiful a sight.

The Morris Minor was the creation of Alec Issigonis, yes, the same legend who would go on to pen the mighty Mini. In fact, he penned it at a time when the British Motor Corporation was the fourth-largest car maker in the world, behind GM, Ford and Chrysler and Morris was the top brand in BMC’s portfolio. Devised as a people’s car, the Minor was available in several body styles, including two- and four-door sedan, a two-door convertible, a wagon (the one you see here), a van and even a pick-up. The Minor boasted unibody construction and an independent front suspension. And the 1100cc engine was the biggest powerplant it would get. What was special about this endearing car was its ability to give some astounding miles to the gallon, a ride that rivalled the best from Detroit at that time and handling like a sports car. The only thing we noticed while driving this wagon version was that with the curtains drawn, you can’t reverse to save your life!

Everybody knows the Bug. The dream of Adolf Hitler to make his people mobile, the Beetle was created to some exacting specifications. At that time, no one knew it would become one of the longest running cars on planet earth, with a record 21 million units being produced (production of the Bug ended this year, when a teary-eyed worker in VW’s Mexico plant drove the last one out). The classic Beetle feature is the air-cooled boxer engine placed aft the rear axle. While the engine grew in displacement, it was one of the most simple and reliable units around. No wonder then that the Beetle could be seen from the frigid areas close to the North Pole to the heated extremes of the Sahara. But we are sure that its immense popularity was not merely because of its legendary reliability but because it doesn’t give anybody in the world a reason to dislike it.   It’s a similar case with the Citroen 2CV. Each and every detail of the 2CV was well thought-out, though people criticised it when it was unveiled in 1948. But what they would later learn was that Pierre Boulanger, the head of Citroen was clear as to what he wanted from the Deux Chevaux – it had to beat the farmer’s horsecart. Which means it had to ride through a ploughed field without breaking the eggs the farmer was carrying in it, offer enough loading space to carry bales of hay, and run cheaply. Again the classic hallmark of the 2CV is its two-cylinder boxer engine and an ‘umbrella handle’ gear lever. Its uninterrupted 40-year run was a tribute to the engineering brilliance of Citroen, and it suitably silenced its critics by its vigorous performance and versatility. As somebody said of the 2CV, ‘You either love them or you don’t understand them.’

You may say that the Renault 5 does not belong here, in this realm of bugs. But look at it this way, it’s a modern interpretation of the bug concept. We can call it angular bug, if a concept like this exists (perhaps the designers at Renault had only a ruler to pen the 5’s lines). The 5, or the Cinq as it was popularly known in France, was written-off even before it landed on the streets – ‘no one wants a compact, two-door car’, but then fortune turned in Renault’s favour. A year after it was introduced, the oil crisis erupted, taking fuel prices skyrocketing. Conveniently, the 5 was there, stretching the litre to the maximum without compromising on performance or driving pleasure. It became a raging success, and its humorous communication only made it even more popular. The 5 also made an ambitious attempt to woo American buyers as ‘Le Car’, but Renault’s hurried strategy could never back up the product promise. The 5 furthered Renault’s reputation by transforming into a cult car,the Renault 5 Turbo, which had several international motorsport wins to its credit. It may not be cute, but its attributes definitely are.

Lastly, the ever popular Fiat 1100 in 103 E guise. The 1100-103 first made a showing at the Geneva Motor Show in 1953, and in 1957, received its first facelift badged the E. It may be no iconic 500 or 600, even then this series in its various guises was Fiat’s mainstay. Available in as a saloon and station wagon, the Fiat is a neat little runabout that became a very popular model in our own country. With its characteristic idiot doors and rounded boot, the 1100-103 E is a neat looker, and the centrally-mounted fog lamp is a beautiful touch. However, the critical aspect of the car is its unbreakable 1098cc engine, a rorty little powerplant that’s cheerful even today, after 46 years it rolled out of the plant in Italy. Though the 1100-103 would come in various guises in the future, this remains the favourite for most Fiat watchers in the country.

Motoring thanks Pune-based vintage/classic car restorer Prakash Kunthe for assembling these cars in record time for this memorable story.