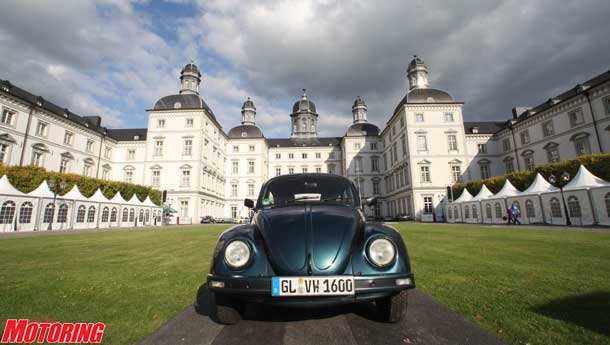 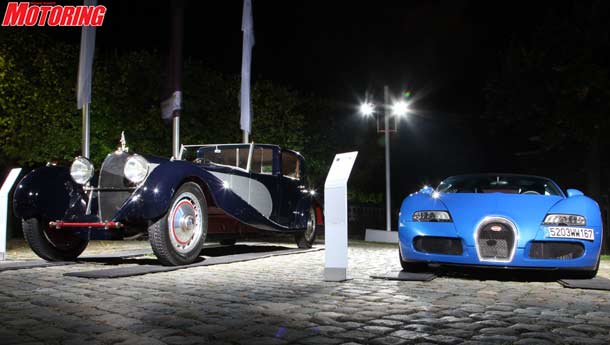 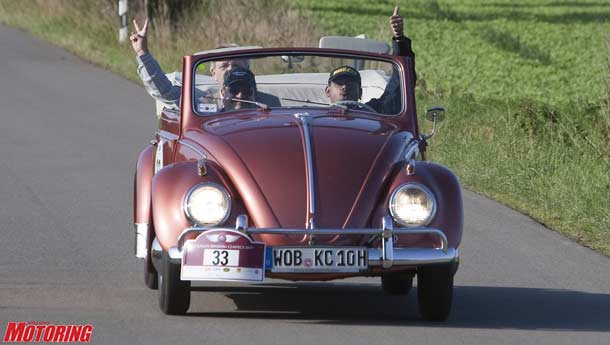 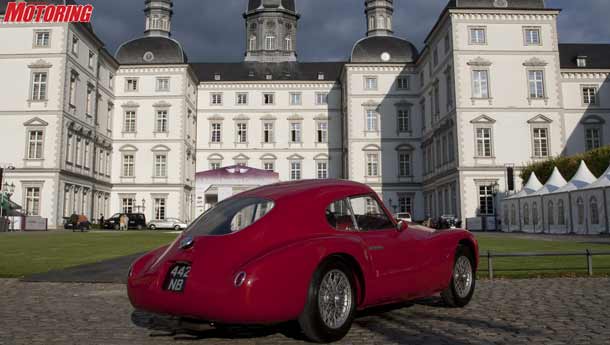 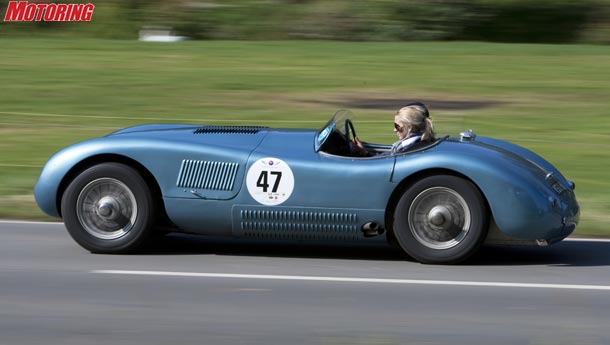 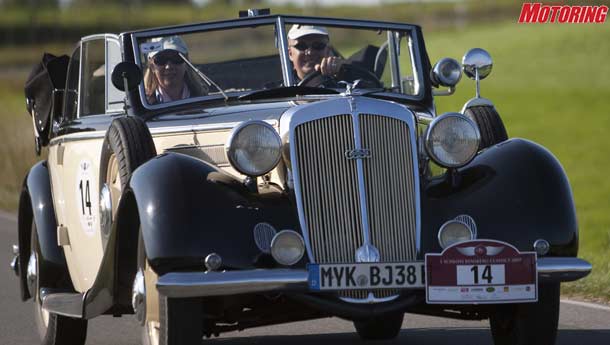 Poor Jackie Ickx didn’t have a chance. We were leading and he just couldn’t pass us on those narrow roads. He made a couple of brave attempts I admit, but how could he know that it’s not easy to overtake seasoned motoring journalists, that too from India? But a racing driver is always a racing driver. One narrow gap, and Jackie downshifted. With a strong exhaust note and the wind tousling his hair, his silver Denzel passed us. Anyway, we had made history. We delayed a Le Mans-Formula 1-Dakar champ for, er, three whole seconds. The point is, we were ahead of a motorsport legend for a brief while, and that’s one for the history books. I would like to add here that it was a mere coincidence that our start number was 33 and his was 34, okay?

Did I just mention Jackie as in Ickx? Yup, the very legend, that too, driving a very unique Porsche 356-like car. The 1958 Denzel that the Belgian great was driving was a very special and unique Volkswagen-related roadster. Wolfgang Denzel was an Austrian motorcycle racer who built his own cars with VW components and here was an immaculately maintained piece being whipped by a racing legend who, let’s say, outlasted his own cars in endurance racing. And what was the car that kept the great Jackie Ickx at bay? Our 1958 Beetle Karmann cabriolet.

Pause. You must be wondering how come, in just 200-odd words, I have mentioned a racing great, a rare classic and a special Beetle. That’s because, ladies and gentlemen, I participated in an exclusive rally for classic and vintage cars in Germany and later feasted my eyes on some of the most exotic metal that could move. It was the first edition of the Schloss Bensberg Classics (SBC), a fancy do for classic and vintage machinery, which had Volkswagen as one of the main sponsors. That meant the whole group was represented by some incredible cars. Which ones? Hold on, hold on, all will be revealed. But there were plenty of other awesome non-VW cars as well. The SBC was held in a fancy baroque castle near Cologne and the event included a rally with the old-timers and the next day was a concours. The concours jury had some big names, including Walter De Silva and Giorgetto Giugiaro, while one of my co-participants, driving a 1966 Lamborghini 400GT was an elderly bearded Italian driver called Valentino Balboni (funny, did you know there’s a Gallardo with the same name?).   Okay, enough name dropping for now and back to the topless käfer. With me was Adil Jal Darukhanawala of Zigwheels and Kurt Rippholz of VW. The three of us piled into the beautiful Beetle that belonged to VW’s own collection of classic cars. I was “navigating” for the first half of the rally, while Adil was behind the wheel. Kurt was squeezed into the rear seat; his role was that of co-navigator/co-driver/co-cheerleader/co-German translator/co-facilitator, all rolled into one. I had an official looking time sheet and a pad with two stopwatches mounted on it — as if one isn’t confusing enough. And of course, the tulips, which thankfully were mostly accurate. Mostly being the key word.

The day before, the briefing by the clerk of the course was brilliant, clear and explicit, but I didn’t understand anything. So I went to the rear portion of the Schloss to see the cars parked there. There were some breathtaking classics all right, and parked in one corner was a silver Mercedes-Benz G-U-L-L-W-I-N-G. It was so low-key and low profile compared to the other cars around, but for me, it was the centre of my solar system. And the other cars? How’s this list: Facel Vega HK500, Dino, all sorts of Beetles and Microbuses, 356s and 911s, Aston Martin DB6 Volante, 300 SL Roadster, Horchs and Wanderers, Ferrari 275 GTS and 365 GTC, Bugatti Type 35, Fiat 8V, Karmann Ghias and a VW Rometsch coupe... and did I mention the XK120 Fixed Head Coupe and, hold your breath, a proper C-Type Jaguar?

And here I was, being passed by, for heaven’s sake, Jackie Ickx. We didn’t bother with the time charts, calculations and other irritants. We were out for a memorable drive in a classic across the fabulous German countryside. The Beetle’s hearty boxer at the rear kept pace without missing a beat, chugging along the marvellous twisting roads. Many cars passed us, while we were cheering them along. And surprisingly for a German, Kurt was like a tourist, snapping pictures of the Bergischland as it’s called. I don’t blame him, because the vistas that unfolded beyond every curve were worth picture postcards. The roads wound up and down and were often dappled in the shadows of huge trees. The sun was shining and I was in a cabriolet! What more could one ask for? A few litres of unleaded would do very well, thank you.   No wonder VW’s advertising in those days said that though the car looked almost the same, it had hundreds of changes — VW kept adding other basic and essential requirements to the Beetle, like a fuel gauge, for instance. But ours was a bit too old and the Beetle, surely enough, sputtered to a stop. We were out of fuel. And with that went even the little hope of going anywhere close to a podium and picking up a trophy. Or (why not?) two. While we were waiting for the backup to arrive, we just kept shooting pictures and gazing at the cars that went by (There goes a VW-Porsche 914/6! Here comes a Mercedes 250 SE Coupe!). The backup cars were a Touareg and coincidentally, a new Beetle cabrio — and as far as photo ops go, it was a bit much. Click. Click. Click. With the Beetle filled up, we were back on the road, only to see other rally cars coming. Or were they going? I was navigating, so I wouldn’t know. Essentially, someone somewhere was lost and it could very well have been us. Eventually, we were perhaps the last to make it to the lunch spot, which was another God-awesome picture-perfect castle. Then it was my turn behind the wheel.

A left-hand drive Beetle in a left-hand drive country is as alien to me as a right-hand drive Beetle in a right-hand drive country. Got you there. What I meant to say is that my own 1960 Bug in India is an LHD, so driving this one was so much fun, especially in a LHD country. What crisp gearshifts, what a gutsy engine beat, what dynamics and... what’s that? It was one of those gymkhanas. The rally organisers had kept some surprise gymkhanas along the route, which meant some great tests of your ability. Like your judgement in reversing or keeping your car equidistant between two pylons or completing a circuit around a roundabout within a fixed timing. I think I was lousy at all of them, but there was of course something I was brilliant at. Whenever I spotted anybody with a camera or some locals waving heartily, I gave them my best driving pose. I thought I heard them say: “Zee, zee! Die Indianische Klassik-veteranen Fahrer!!!”

And so I drove on, ably navigated by Adil and ably co-navigated by Kurt. The weather was awesome. The sun was sending slanted rays across the trees and painting them a golden hue. The strip of smooth tarmac twisted to the left and right, and up and down. The käfer’s belly had enough combustible liquid inside and the boxer’s beat was steady, as we entered the last few kilometres of our 150 km run. It was a memorable drive, a dream come true for me — driving a classic in what can be called classic countryside. And somehow we made it back to where we started in the morning. Back to the Schloss, where we went up the podium again. And when the MC asked, “Iz dere anyzing you vanted in your car?” I replied, “Satellite navigation.” He didn’t get ze joke.

According to Kurt, there were around 65-odd cars that were flagged off at the event, 55 managed to complete the course, and we were 50. Not bad. And in some gymkhanas, we were actually in the 20th position. Quite good, we actually managed to let the others win.

The author was in Germany on invitation from Volkswagen to participate in the SBC.