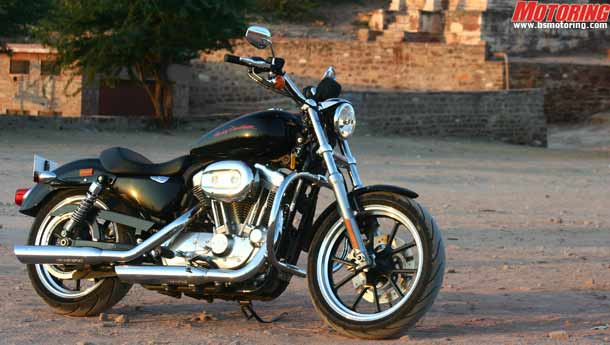 Iconic American motorcycle maker Harley-Davidson has an additional reason to be annoyed at the Budget spanner in the works of its assembly plant in the country.

The company had started to accept bookings for two models - Iron 883 and SuperLow - produced locally after assembling parts brought into the country in a completely knocked down (CKD) set. While a formal launch of the two models is yet to happen, deliveries of a few units have been made, according to a company spokesperson.

The problem is the Budget change to the earlier rule of a concessional 10 per cent duty on CKD assembly. The Union Budget has changed the definition of CKD and engines, transmissions and gearboxes not made in India would now attract a 30 per cent duty (the original proposal, modified on industry protest, was a 60 per cent rate). Says Anoop Prakash, managing director, Harley-Davidson India, "We respect the fovernment's decision, even while we had shared our view that the increase in duties at this time may affect the development of the leisure motorcycling segment."

Adding: “Regardless, we remain committed to the Indian market for the long term and will now evaluate whether we invest in adapting our operations to the new CKD standards or manage our business to the higher duty rate." Meaning, the assembly plant could even be put in reverse gear.

What irks Harley more was that it had taken the extra precaution, before deciding on a CKD assembly unit in India, of approaching the authorities to formally clarify that they would get the concessional duty.

Last year, it had approached the Authority for Advance Rulings of the finance minsitry on the issue. The AAR is meant for this purpose, to clarify and get binding opinions before a decision, in order to save both the government and the taxed entity later dispute and allied legal and other expenses.

And, in July last year, the AAR gave a favourable ruling (the application was made by H-D Motor Company India, a wholly-owned subsidiary of Harley-Davidson Singapore)on the proposal to import motorbikes as dismantled units. Harley had cited the case in 2006 of the premium German car maker, BMW, whereinrein the latter was allowed to operate as a CKD operator even though some individual parts were to be imported in semi-knocked down condition.

Harley, therefore, argued to the three-member panel headed by Justice P V Reddi that it, too, should be eligible to claim the concessional rate of duty applicable to CKD kits.

Due to the new upward revision in duties, it is now reviewing whether to proceed with its CKD plans in India or not. A 10 per cent customs duty allows premium manufacturers who do not wish to set up a full-fledged manufacturing facility in India to price their products competitively without importing these. If they did the latter, it doubles the price of the vehicle.